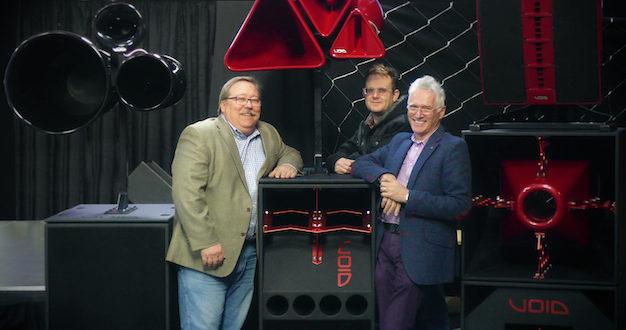 Void Acoustics has appointed Rob Hofkamp to the position of North American director of operations.

Hofkamp (pictured left) brings his many years’ of experience to the British loudspeaker manufacturer, and his plans are to build on the success Void has experienced throughout the world and expand their dealer base in North America.

The introduction of Hofkamp comes at a time of major expansion that has also seen industry veteran David Bissett-Powell (pictured right) join the company.

In 2015 Void Acoustics incorporated in America with a warehouse facility created in New York. The company says the introduction of Hofkamp completes its plan to set up a solid base of operations in North America and build a dedicated team of system integrators and dealerships across the region.

Alex Skan, managing director at Void Acoustics (pictured, centre), commented: "We’re delighted to welcome Rob to the company; we couldn’t ask for a better person to spearhead our efforts in North America. Having someone based in North America will help us build our brand on the other side of the Atlantic and continue the rapid expansion we have been experiencing over the past few years".

"The team at Void Acoustics have made a solid name for themselves in Europe and Asia. I am really excited to introduce the brand to a wide North American market,” added Hofkamp. “These guys haven’t just done the same old thing that everyone else is doing; these guys set out to forge their own path and create something new. I am delighted to be a part of it".

Hofkamp and the team will be at The 2017 NAMM Show in California later this month and exhibiting at InfoComm in Orlando, Florida on June 14-16.