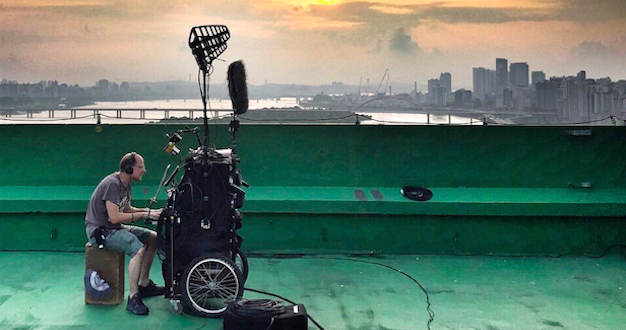 Production sound mixing has always been a tough profession, but surely few will have been pushed as hard as Stevie Haywood and Barry O’ Sullivan were during the making of one of Netflix’s acclaimed original series. Adam Savage caught up with the pair as they recovered after the latest run of filming.

As we all know, being able to deal with unpredictable occurrences and think on your feet is crucial in this industry. Whether you’re a front-of-house engineer, a record producer or in the case of the two interviewees for this article a production sound mixer, you’ve got to be able to stay calm and collected and still get results when things don’t quite go according to plan.

But what if this ‘plan’ is subject to such a degree of change that almost nobody – cast or crew – knows exactly what to expect once the cameras start rolling? This is the situation that Stevie Haywood (main picture) and Barry O’ Sullivan found themselves in when on the set of the hit Netflix series Sense8, season two of which finished filming only last month.

Created by visionary sibling duo The Wachowskis (The Matrix trilogy, Cloud Atlas), Sense8 is centred around eight characters from all corners of the world who start experiencing violent visions before realising that they all share a mental connection and can communicate mentally, as well as gain access to each other’s secrets and individual abilities by using these strange powers.

Sounds intriguing then, and from the description alone you can tell that sound is likely to play a key role throughout. As a first question though, what’s it like working with someone as well known as Lana Wachowski, bearing in mind this was her first project without sister Lilly by her side? Well, it turns out that ‘unconventional’ would be one word to describe her way of doing things solo, which creates a working environment that is challenging to say the least.

“It couldn’t be further from the script – you turn up and you really don’t know what she’s planning to do. Dialogue certainly changes,” reveals Haywood. “Her style is to shoot these enormously long takes – the default position is two cameras and then the shot evolves over the length of the take, which can be 15-20 minutes long. It loops and loops and she takes it back to different points and works through until she’s got what she wants.

“If there are 14 people on screen, you have to make sure they’re all miked up because they may or may not say something. So there’s this constantly developing shot and the other thing is people arrive, we may or may not be able to get the boom anywhere near them because the shot could expand or contract; we’re not sure whether we can stop people’s footsteps – even the crew from walking around – because there are cameras going around in circles and there’s also the fact that we never do any rehearsals. We rehearse on camera effectively. When she says go you’ve got to be ready and if you’re not, she goes anyway. Nobody is allowed to call cut unless it’s her, regardless of technical issues. If something doesn’t work she expects the actors to improvise around it and keep going.”

O’ Sullivan, who worked on the whole of season one and a portion of the second series before Haywood stepped in, recounts a similarly ‘full-on’ experience when he was in the role: “In terms of recording audio it’s probably the most challenging show that I’ve worked on,” he says. “Very often you’d look at a scene and have an idea how it’s going to be shot and the way you’d want it to go – how you’d like it to sound – but on a show like Sense8 what you’re trying to do is cover all the bases because you don’t have any clear idea what’s going to happen. You’ll have eight to ten radio mics out on people trying to get all of that into the mix. Traditionally you would always have a boom or two running but because of the way that Lana likes to shoot the booms are a big compromise so you spend a lot of time relying on radio mics.”

Constant improvisation wasn’t the only complication; a series set in multiple countries – 12 in total – and headed up by an executive producer who likes to film on location whenever possible meant a lot of travelling to places that aren’t always ideal for detailed audio recording. And aside from the obstacles presented by the locations themselves, the overall itinerary could hardly have been more unforgiving for the crew and their equipment.

Having worked on the first series O’ Sullivan at least had a rough idea what to expect – although he admits that the second season was a step up logistically – but Haywood found it certainly took some getting used to.

“When I first slotted into it I hadn’t really got my head around the fact that they wouldn’t build into the schedule enough time to get things from A to B,” he recalls. “For example, we were shooting in Seoul, South Korea, where there were lots of car crashes and motorbike chases etc, and then we jumped over to Berlin to go and tell another story, but that’s also where the studio is based. We were only there for two days before we had to pop over to London to shoot outside the Houses of Parliament for 48 hours then the whole crew was shunted back over to Germany again.”

And a common issue for users of wireless gear when on a major international job is the spectrum variances from place to place, particularly when you’re expected to travel from Europe to Asia and be ready to go with little preparation time.

“I use radio mics that have a wide range of frequencies available to them but sometimes we hit brick walls. Nothing works everywhere and you sort of think ‘once I’m in production I’ll be able to work something out about what I’m going to do in the next country’ but once you get going there’s no time to organise anything,” Haywood explains.

“The next season I think we’ll approach quite differently! I’ll have more redundancy with me I think and take more stuff than I did this time because they don’t care about how heavy it is or how many boxes there are; it’s about you having everything available wherever.”

This is especially true when someone like Lana Wachowski is in charge, as Haywood discovered in the early stages of the process.

“If she suddenly decides that she wants to play back some music here, you’ve got to have some options on standby for her because 30 seconds later she wants it working,” he notes. “The first time it happens it didn’t really go to plan because I wasn’t prepared for that level of standby but after that we responded quickly.”

So what else would Haywood change to make the third series more manageable from an equipment perspective? Like most audio professionals he has a very firm brand of choice when it comes to recorders, but he admits that an upgrade may be necessary before it’s time to go again.

“I’m a Sound Devices guy. I had a 788T on a trolley and a 788T in a bag. I knew there was a lot of car stuff and some difficult locations, but next season I’ll take a machine that records more tracks – something like the 688 and now they’ve got the Wingman app and that’s something I was looking into while I was out there,” he says. “I quite often had to run the two machines side by side to take into account all the tracks that we needed and that just wasn’t a very efficient way of operating.”

As for the all-important radio microphones, Haywood is a fan of the Audio Wireless brand from ‘radio mic guru’ Aldo Hakligil. “They cover a huge range of bands, which was very useful as they go from Channel 37 all the way up to 51 on one smallish unit,” he continues.

“Aldo also built me an antenna array so I could split the signal but still have the max mW RF that was legally allowed in the country and have that running on five different aerials that were all synchronised. That was vital.”

O’ Sullivan also lists his recorders among his most prized possessions, along with his selection of microphones: “Just before season one I switched to Zaxcom. I’m using the Nomad recorders with the Oasis control surface,” he explains. “Lectrosonics radio mics I’ve been using for a number of years and they’re great too. Interior-wise I use Sennheiser MKH 50s and then for exteriors I tend to use MKH 60s. In terms of lavs the main go-tos would be Sanken COS-11Ds.”

Out of this world

Finally, out of all those locations worldwide, which ones gave them the most to think about? “Mumbai is probably the noisiest place I’ve ever been to!” O’Sullivan claims. “I remember having a conversation with Lilly Wachowski on season one and she reckoned that you could probably put all the Mumbai sequences together and have a car horn on every word.”

Haywood adds: “Seoul is just a really RF-heavy place and although there are rules and regulations it seems that a lot of people don’t pay attention to it so there are a lot of problems with radio mics.”

Even though it required an immense effort from him and the rest of his team, speaking to Haywood it becomes clear that it’s the sort of project that gets him really excited, and even though she pushed him virtually to the limit of his capabilities, getting the chance to team up with Lana Wachowski was a real privilege.

“The hours were absolutely astronomical. The minimum that we did on the nine weeks I was on it was 14 and a half hours,” he comments, “but Lana is the classic cinema auteur; it’s so spontaneous but at some point she manages to exercise her control over it all and coax out these amazing performances.”