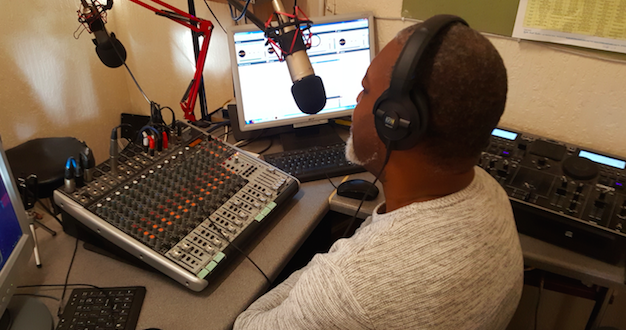 Skipper of the good ship Fylde Coast Radio tells Colby Ramsey why he and his crew of volunteers need relinquished audio gear to realise the station’s full potential in its new premises.

Fylde Coast Radio is a small, community-oriented volunteer radio station that has been servicing the North-West Lancashire area for around two years, originally established with the intention of getting coverage for Blackpool FC games via web streaming.

After working out of a local music school for some time, station manager Don Keady and the team of multi-talented presenters set about locating a studio to expand their rapidly growing operation.

Keady, who was heavily involved in one of Australia’s biggest community radio stations for some time, has seen it go from strength to strength, and is proud of what he says is now ‘officially the fastest growing radio station in the country’ due to its impressive listener numbers. “Everyone mucks in and it all works,” explains Keady. “We have a very full-on programme but sometimes there is no way for us to pre-record if people are away.”

Despite its recent success, however, Fylde Coast Radio survives entirely on handouts and contributions from the community, meaning future expansion has become a particularly difficult task. After exhausting the search for a new base of operations, local working men’s club The Marton Institute provided FC Radio with an unlikely solution – an old sports pavilion in a field at the back of a bowling green, from which it now operates.

Deciding to keep their existing studio, the team immediately set out making the new space fit for operation. “We run it as a business but with a 99% community slant – there’s definitely a family feel in terms of how things are run here,” says Keady. “Everyone has mucked in to refurbish the place and now it looks really good.”

While the station has taken advantage of some impressive sponsorship opportunities and some incredible good luck with the calibre of presenters that it has managed to get on board, Fylde Coast Radio continues to rely solely on charitable gifts and cast off equipment.

Unfortunately, the attainment of audio gear is one area in which they have not had much luck. Despite owning everything needed for a radio station to operate, the current equipment is old and out-of-date, and so the team have tirelessly appealed to any generous individuals across the length and breadth of the UK to donate equipment to the cause, no matter how large or small.

At the moment, an adapted Behringer mixer that was originally designed for a live band is being used for day-to-day operation along with two KRK monitors taken from the DJ’s stereo system for foldback, “so we could really do with a radio desk of some description, along with some recording equipment, especially microphones”, remarks Keady. “We’ve got an old electric keyboard, a drum kit and a lot of old analogue equipment, and we still manage to keep going. When you’re working at a community station all the tiny things add up.”

The next step on the road to expansion would be to get some new instruments for the studios, and Keady is confident that one of FC Radio’s 40 volunteers would be prepared to travel “from John O’Groats to Land’s End” to pick up anything from a guitar or saxophone to a single microphone.

In the new premises, Keady plans to transform the away changing rooms into a recording studio while the home changing room is set to become a broadcast studio, with the central area to be used for bands and live recording space.

“We’d like to get the studios ready to use them as rehearsal rooms for kids,” Keady explains. “We’re looking at training them in both the new recording suite and broadcast suites and so we are also in desperate need of some telescopic mic holders and all those accessory bits. If some kind people were to offer us any decent gear, our people would be straight in their cars to go and get it.”

There are also plans in place to create a national radio service aimed at young people called Tangerine Radio, as well as a female-focused station and another aimed at UK businesses, which Keady says will be operated out of the new broadcast suite.

While FC Radio’s widespread public appeal for unwanted instruments and audio equipment remains its prerequisite for expansion, it already has a lot to be positive about when it comes to its strong foundations and plans for the future.

The station’s popular blues programme is close to being syndicated with what Keady describes as an “uncannily great” blues DJ, so much so that it is now in talks with the local council about putting on a blues and jazz festival in the Blackpool area. His overall vision however is to deliver and leave the legacy of a genuine community radio station in the area.

“We have two exceedingly good mentors and a great management team; our broadcast and recording engineer Ivor Smith is a fountain of wisdom while our studio manager Tony Scarborough is remarkably good at coaching people, and we’re always looking to use tomorrow’s tools to run today’s business,” says Keady.

“I think real community radio is not truly appreciated in the UK, but we blend the best bits of both,” he concludes. “It is nice and community oriented in terms of the way we run, but underneath everything is commercially acuitive.”

Fylde Coast Radio is currently accepting donations of audio equipment from locations nationwide. If readers would like to donate any gear to the cause, they can get in touch with station manager Don Keady via don@fyldecoastradio.org or by calling +44 (0)7931 014665.