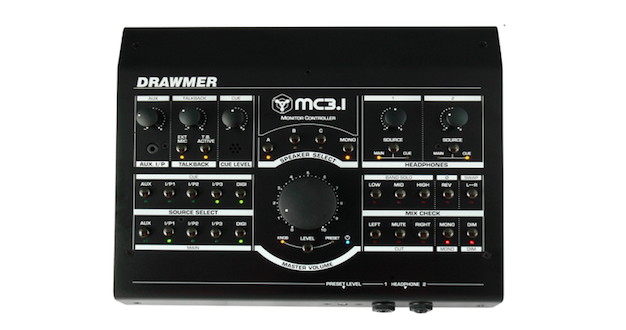 I grew up in monitor controller world in the days when Glensound outside broadcast desks were simple beasts and needed a DK2/20 or DK2/21 to add monitoring and control functions that made life that little bit easier.

But time marched on and more functionality got built into location desks while the starlight of monitor controllers began to fade. Yet, the requirement for comprehensive control of what we’re listening to has never gone away and with the rise of DAW mixing, the need has probably grown a hundredfold. Drawmer has three products in this ballpark. The MC1.1 is a monitor preamp while the 2.1 and the new top-of-the-range MC3.1 have the full fat ‘monitor controller’ label.

The ins and outs

So what do you get in your MC 3.1 tin? You can connect three pairs of speakers to the XLR outputs and one sub, which is a mono output. There are also two independent headphone amps switchable between the main and cue outputs. Talking of cue, there is an independent cue output on balanced jacks with its own volume control and independent access to all inputs. On the input side there are two un/balanced stereo inputs on combi XLRs, one stereo unbalanced input on phonos and one digital input on combi XLR, capable of taking AES or SPDIF digital signals up to 192kHz at 24 bits. These inputs and outputs are all on the back panel while there is a stereo AUX 3.5mm jack input on the front for extra convenience.

Let’s take a quick break there to plug the beast up. Start simple by putting the balanced output of your desk into input one, grab an AES out from your DAW and stick it in the digi input. Now you can select between sources to your mix and/or cue output. The inputs are additive though, and of course buffered, so you can mix on the monitor input buttons if you wish. Now plug up your main monitors to speaker output A, your second favourites to speaker output B, and your checks, near-fields etc. to speaker output C and you’re ready to do some serious monitoring.

But first, you need to line up your monitors properly like they do in big school. When I started out in studios, lesson number one was ‘first line up the monitoring’ – if you can’t rely on what you’re listening to, everything else is compromised. The initial procedure involves pink noise, a sound pressure level meter and the output trims for the speakers located on the base of the MC3.1. Check out the Drawmer website to download the line up tones. Now we’re ready to move on!

But what about the talent sat alone in a lonely room without any love? When plugged into the cue output the studio monitors have access to the cue bank of switching, and you can feed them whatever you want without changing your own monitor selection. If you’re feeling very communicative, talk to them using the built-in talkback mic or plug in an external mic or foot switch if you don’t want to reach for the button.

These are our inputs and outputs, but what else can we do with them? Here are a few of my favourites: Dim takes 20dB off your level. There’s a mono option available, so often overlooked in today’s multichannel world but something that really should be used. Alongside cut A or cut B (both available on the MC3.1), you don’t really want stereo mono – the cut A/B options have a special effect on the headphone output to simulate their effect in a room. For total silence, there’s a mute switch, which does not apply to the headphone outputs. Beware though, these headphone outputs go loud! There’s also phase reverse and L/R swap.

So what sets the MC3.1 apart in a world of ‘me too’ copycats? Well consider the Band Solo function. You have three frequency bands to choose from – low, mid and high. Hitting these solo buttons allows you to focus your listening on one (or more, the feature is also additive!) of these bands. The crossover points are at 250Hz and 3.5kHz and the slopes are 6dB per octave, and this is really about the discipline of listening. I’ve not seen this feature before and you might argue that we’ve mixed for years without it, but that is to miss the point. The more listening we do and the more focus we put on it then surely the better our mixes will be.

A more familiar feature is the preset option on the Master Volume, where there is a select function that switches control from the master volume pot to an adjustable preset level. This is absolutely vital in comparative listening sessions, because what we often perceive as differences in quality can be traced to small changes in level and the ability to guarantee level matching is a must-have.

Then I asked the question, ‘What about a stepped volume control then?’ It seems the available 24 stepped switches just don’t offer fine enough control. Of course none of this would matter if the MC3.1 failed on sonics. I recently recorded a cut down version of local band Fountainhead for a Spendor speaker demo and used the 24/96KHz files to audition the controller. I drove the analogue input with the output of the Marenius S2 DAC. Not only did the analogue side of the circuitry sound transparent but the digital input was excellent.

The MC3.1 is a high quality device with an innovative array of features. Highly recommended.