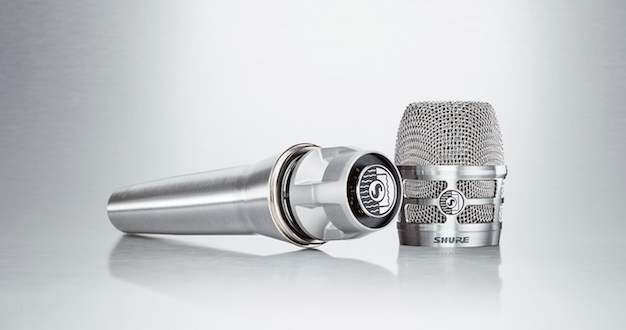 The term ‘revolutionary’ is unquestionably overused in new product descriptions these days, but you could perhaps forgive this manufacturer for choosing the word to define its new flagship mic, as Andy Coules discovers.

The latest dynamic microphone from Shure has arrived with much fanfare and is being hailed as the most technologically advanced mic of its kind for 50 years. Shure claims that it has virtually no proximity effect, has excellent off-axis rejection and will require minimal EQ and processing due to its accurate, flat frequency response. These are bold claims but before we take a look at this wonder of modern science let’s have a quick history lesson.

Shure’s Unidyne I capsule went into the very first directional, single element, dynamic microphone, the Model 55 (aka the ‘Elvis’ microphone) in 1939 and was developed into the Unidyne III capsule, which went into the iconic and ubiquitous SM57 and SM58 microphones in 1965 and 1966 respectively. It’s interesting to note that the SM57 and SM58 were developed as studio mics (that’s what SM stands for) aimed at the emerging radio and TV broadcast markets – hence the lack of a switch and the non-reflective dark grey finish. Unfortunately sales were sluggish in those hard-to-break-into industries and there were plans to discontinue both models when someone had the bright idea of giving them to some live sound engineers and the rest, as they say, is history.

One of the key things that makes the Unidyne III capsule so effective is its directional capabilities. This comes from a clever design which causes sound arriving from the back of the microphone to travel down two simultaneous paths: one directly to the back of the diaphragm and the other a slightly delayed path to the front of the diaphragm, thus causing cancellation. Add to that a frequency response that sounds great with most voices and an in-built shock mount which reduces handling noise and you can see why the SM58 has been so popular for the past 50 years.

The KSM8 uses the new Dualdyne capsule (so named because it has two diaphragms), which takes this whole process a stage further by utilising two diaphragms in a reversed side entry airflow system, meaning the sound enters via the side inlets and passes through the passive (i.e. rear) diaphragm before arriving at the active (i.e. front) diaphragm; this resistance network ensures that low frequencies are partially blocked from entering the cartridge and results in a natural low frequency response with a controlled proximity effect.

For those not familiar with the proximity effect this is the main consequence of the clever engineering required to create a directional microphone, which results in the frequency response of the microphone changing depending on the distance of the source sound. If you get close up (i.e. less than an inch away) the low frequencies are artificially enhanced; if you get far away (i.e. over three inches) it sounds thin and weak, thus somewhere in the middle is the sweet spot where you get the most even frequency response. This can be a major problem when the microphone is being used handheld for vocals; the vocalist needs to have very good microphone technique to consistently get the best sound.

The Dualdyne capsule also utilises the patent pending Diaphragm Stabilization System (DSS), which protects and stabilises the active diaphragm from unwanted excursion or rocking during plosives or impact. The whole thing is mounted in a Shure pumping pneumatic shock mount, which is fully integrated into the capsule’s acoustic properties – all of this is housed in a dent-resistant hardened carbon-steel grille lined with hydrophobic fabric atop a tapered body terminating in the usual XLR socket.

When I first plugged it in I was rewarded with an instantly warm and natural sound – very smooth and not at all edgy with no obvious presence peaks. The next thing I had to do, of course, was test the proximity effect and while it hasn’t been eliminated completely I was quite surprised how much it’s been reduced compared to other dynamic microphones; the sweet spot is noticeably larger.

So I decided to throw it in at the deep end and take it to a gig to try it out. The first thing I did was put it up on a stand stage centre and have a listen on a big PA with a flat EQ – again it sounded very warm and natural so I set up an SM58 beside it and the difference was quite striking; the SM58 was dull compared to the KSM8 and a fair bit quieter at the same gain settings. Then I realised this was probably a slightly unfair comparison so I got a Beta 58 out and the level was a lot more comparable (which I assume is down to those neodymium magnets used in both models). In a direct comparison the KSM8 was noticeably warmer than the Beta 58 and when I tested the off-axis response I found the cardioid response of the KSM8 was a little bit tighter than both the SM58 and Beta 58 (which is, of course, super cardioid).

Next I let it loose on three actual real live vocalists. The first two worked out fine – they were strong singers who enabled me to get plenty of gain before feedback; the only EQ I used on the channel was a high pass filter and both sounded great in the mix. The third vocalist was slightly harder to work with – quite a soft voice that required a few extra tweaks of the graphic EQ to get the required level. I also encountered feedback issues when she put her hands around the top of the microphone, which was quickly dealt with by tweaking the monitor EQ (as you would with any other dynamic microphone). Every vocalist I tried it on said they liked the sound and would like to use it again.

I mentioned earlier that to compare the KSM8 to an SM58 is an unfair comparison, but it’s difficult not to. They’re clearly part of the same lineage but are separated by 50 years of incremental technological advances – the SM58 is still much loved by vocalists and engineers alike.

One area in which they clearly differ, however, is the price – the Shure KSM8 is just over four times the price of an SM58 but you do get a lot of bang for those extra bucks.

I was very impressed with the performance and the sound of the KSM8 – it’s the kind of microphone that could transition quite easily from live to studio usage and on into TV and radio. Shure has put a lot of very clever engineering and its many years of experience into creating what could be the ultimate dynamic vocal microphone.