Home / Feature / Inside the Visconti Studio at London’s Kingston University 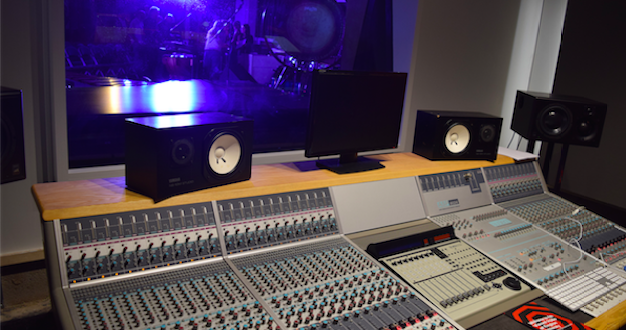 Inside the Visconti Studio at London’s Kingston University

Kingston Uni’s partnership with a certain star producer turned a few heads recently, including the one belonging to Adam Savage, who went along to see the finished result of the new Visconti Studio.

Having been one not so long ago myself, I know how difficult it can be to keep students motivated. Inspiring a room full of people who would rather be downing jägerbombs than sitting through another lecture must be a tough thing to have to do every day, but somehow I think the new visiting professor at London’s Kingston University isn’t going to struggle to get his students’ attention. That’s because in this case it’s legendary – and this time we do mean legendary – producer Tony Visconti.

That’s right, after spending the past five decades working with some of the biggest names in rock and pop such as U2, Morrissey, Marc Bolan and of course David Bowie, Visconti has come on board for a new research and teaching project at the University, ‘The Heritage and Future of Analogue Recording’. The role will see him recording with students and staff, as well as invited guest artists, in a newly upgraded studio facility on the Kingston Hill Campus now known as Visconti Studio. The partnership also involves the British Library and Science Museum.

Based around an unusual 300sqm octagonal live room – one of the largest in the country – and stocked with a varied selection of analogue and digital recording equipment as well as a unique collection of instruments including a Hammond organ, Steinway grand piano and best of all a Mellotron – famously used by Sir Paul McCartney to produce the flute-like sound in the introduction to Strawberry Fields Forever – the studio represents a chance for Visconti to pass on his vast knowledge of recording with analogue equipment and help keep these methods alive.

“I’m interested in giving the students a flavour of what the real world is like in a recording studio,” says Visconti. “I came from an education where you started as the person who made the tea and worked your way up the ranks and that system doesn’t exist anymore. I’d like to impart that experience while I’m with the students. Kingston University wanted a state-of-the-art analogue studio and I feel I have to do this – I must be with the student body and show them the traditional ways of recording music.”

Although it’s clear that Visconti’s preferred approach is to do things the old way – and I’m certainly not going to disagree with him on anything to do with recording – a quick glance at the gear list (see below) shows there are plenty of digital options available in the new-look control room too.

Ebby Acquah, technology officer for the Visconti Studio and former in-house engineer at Mute Studios, where he rubbed shoulders with producers such as Flood, Ben Hillier and Gareth Jones, explains how it was vital to provide a variety of options even if the facility is being hailed more for its analogue offering.

The building has been used for recording for many years, but several enhancements have been made not just in the control room – which has been heavily upgraded – but the live space as well.

“It’s always been a studio and live room and we’ve improved the inside in terms of we’ve installed a drum isolation booth, which is linked to the control room. We’re going to build another one [iso booth] as soon as budget permits and we’ve also got some Abbey Road-spec gobos from the ‘60s, which we had manufactured so we’re able to isolate sound in the room,” notes Acquah.

“ADG [Acoustics Design Group] designed the control room, which has totally changed. They completely redesigned the space. It was very difficult to focus on frequencies before because it was almost like it was constantly changing and so John Flynn [ADG owner], who’s a top studio designer, came in and we’re over the moon with the result.”

Undergrads and postgrads as well as masters and doctoral research students will have access to the Visconti Studio, and there are also plans in place to make it available for commercial hire. Taking around a year to complete from the initial conversations to the finished result, the space is a worthy flagship when lined up alongside the University’s other audio facilities, which are pretty well equipped too.

“That control room is for use by Level 6 and 7 students, so third year undergraduates and postgraduates, and we’ve also got three smaller project studios for Levels 4 and 5 (first and second year undergrads), one of which has just been installed with an SSL XL Super Analogue desk,” Acquah continues. “So there are a few facilities here but we’re just looking to build them up and improve them at all levels. We’ve also got a 24-seat computer suite and an MA surround sound editing suite.”

There’s also a d&b audiotechnik loudspeaker system in the octagonal room comprising Ci7 tops and C7 subs for when the Visconti Studio team want to turn it into a performance space. “It’s a really top PA and we had it installed two years ago. We’re running an Allen & Heath GLD-80 desk in there and HK monitor wedges so it’s a good system,” Acquah says.

Its effectiveness as a place for small concerts was demonstrated at the official launch on 19 September, where singer-songwriter Mary Epworth – and sister of Paul, in case you’re wondering – performed a couple of tracks to bring the event to a close. Visconti was also officially made an Honorary Doctor of Arts in a ceremony – complete with gowns and silly hats all round – on the night. Earlier in the evening though, visitors were played new material for Epworth produced by students under the guidance of Visconti, and were also introduced to the rest of the studio team, which includes director Isabella Van Elferen, project leader Leah Kardos, education officer Alex Evans and enterprise officer Philip Chambon.

The demonstration marked only the start of the upcoming opportunities for students to work closely with the producer – for example, the Visconti Studio Winter School will take place in the week commencing 13 February 2017. The five-day intensive programme led by Visconti will see participants record a track with an invited artist while engaging in activities such as operating and maintaining tape machines, analogue multi-track recording/mixing and microphone techniques, with a particular focus on recording in the octagonal live room.

“This is a fantastic, unique opportunity for me as I barely made it out of high school and my university education was 50 years in the recording studio. Working here with students at the Visconti Studio – which has the potential to be a first class facility – is going to be a magical time for me,” states Visconti. “I say to the students here at Kingston University, go out and make analogue recordings. It’s the way music should be heard and it’s a beautiful thing.”