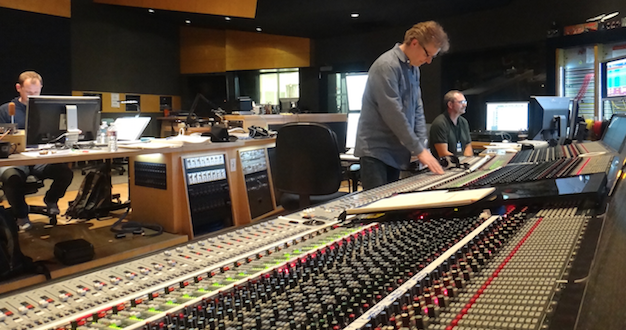 Well regarded in the industry for his epic movie soundtracks, composer Simon Franglen (Avatar, Titanic) talks to Colby Ramsey about his latest project, the star-studded remake of classic Western The Magnificent Seven.

How did you originally begin working on The Magnificent Seven?

Myself and James Horner had worked together for many years, including on Southpaw with the director, Antoine Fuqua, who had asked James to do The Magnificent Seven. I met James along with Simon Rhodes, one of the great engineers of Abbey Road, in London and we spent a week working there while James wrote some themes for the movie.

The next week James flew back to LA, and we were really excited because it’s a cowboy film, which doesn’t come about very often. After I received the tragic news about James’ death, I felt like it would be wrong to just let his themes – as the last things he had written – to just disappear. I spoke to the musical team and said I would like to finish the themes off as James would have wanted and give them to Antoine as a gift, so Simon and I completed a suite of music in the style that we knew James wanted for the score.

I flew to the set in Louisiana where Antoine was shooting and gave him the CD, upon which he asked me to finish the score. It was a labour of love for all of us. James was a wonderful guy and great friend and I felt like it was just something I needed to do.

Could you tell us more about the score itself and some of the techniques you used to produce it?

The score needed to have two sides. The first was a classic cinemascope feel that involved recording a large orchestra. We recorded everything together as one piece – which is not how things are always done these days – to get that wide cinemascope sound and to get the sound of the instruments to bleed into each other through the microphones.

Secondly, I wanted to make sure the score was grounded and reflected the time period when the film is set. Electronica doesn’t work within a cowboy movie so we used very few synths, and instead I used guitars, percussion and some unusual woodwind instruments to create those rhythmic sounds. We were making the synthetic grooves and percussive tracks that people are used to but with real instruments, and then processing them in Pro Tools.

Where did the mix take place and what sort of setup were you running?

We mixed at my home studio in 7.1, where I used big orchestral sample templates to prepare very highly detailed demos, which were then refined by Antoine. We also programmed everything in Pro Tools and there was a team of us working together at my house to network all the computers together, which is the most important thing in my main studio. There are 12 cables in there: eight for the 7.1 rig and four microphone cables. So in terms of everything other than the orchestra, that was the extent of analogue we had going at one time. It was all purely digital and everything non-orchestral was recorded in 32-bit 48k, while the orchestra was recorded in 32-bit 96k at Fox’s Newman Scoring Stage, which has a lovely Neve 88 96-channel desk.

What sort of recording devices did you use?

Simon Rhodes and myself had a choice of the most expensive microphones on Earth. For the main decca tree, it was Neumann M50s all the way. In terms of the spot recordings and near-field recordings, we fell in love with the Neve RN17s, which are great for individual, detailed instrument recordings. We also used Neve RNR1 ribbon mics and Voodoos on low brass and basses.

So how did the mix all come together in the end?

We were dealing with an 80-piece orchestra, so in terms of mixing we were recording two different sets of rigs. The first was the 96k orchestra rig being sample converted down to 48k, which fed into our ‘pick ’n’ mix’ rig where we mixed it to stems with the synths going in at 48k as well. Then Simon Rhodes was printing 12 to 14 7.1 stems and some stereos as well for use on the dub stage.

We looked at the options and decided, having built guerrilla studios in the past, that mixing at home was possible. There we used Neumann KH420 mid-fields, each sitting on top of Neumann KH870 subwoofers for an amazing 7.1 rig combination. We then used KH310s for the sides and surrounds.

Avatar was the last film that we mixed in analogue as a crew but since then everything has been entirely in the box. I used an Avid C24 as a mix controller and was taking sounds that the live players were generating and manipulating them through Pro Tools. I used quite a lot of plug-ins, including [The Cargo Cult] Slapper for multi-channel delay and the VSM plug-ins, which I really like. We needed a bit of a contemporary sound so we also used a whole host of different reverb plug-ins along with delay and compression.

Did you encounter any particular problems? If so, what were they?

When dealing with these massive scores on live programming sessions, we did run into some data management issues. The sheer quantity of the material that I was generating every day is something that the software cannot handle properly yet. We were driving the rigs very hard, reaching the capacity of what these systems are able to provide.

There’s a roughness in film music that you don’t get with records. There should always be layers of depth in these big epic film score but you need to be mindful of background noise that can take up precious data and obscure audio in the foreground, like dialogue.

What else have you got in the pipeline?

One current project is something I’m about to deliver in China. Imagine a large dome, about 60m wide and about 20m high, with incredibly beautiful wall mouldings with 260 loudspeakers in a 3D IOSONO array around the edge. I’ve written a fully immersive suite of music using four interlocking orchestras, a 48-voice choir, and loads of bells and synths, the idea being that you can properly walk around inside the music. Oh, and there’s one more thing – it’s 2,000 feet in the air at the top of the Shanghai tower.