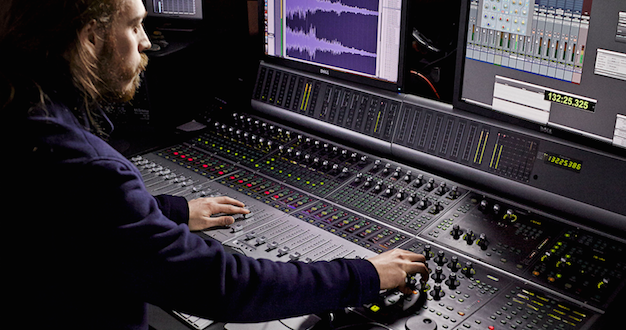 It is fair to suggest that Rocksteady Studios has had Batman down to a tee for a while now. The London-based video game developer has thrived off the success of the award-winning Batman: Arkham series since the first title in 2009, and as many companies look to usher in a new technological revolution with the adoption of VR, Rocksteady is ensuring it’s not left behind.

While Batman: Arkham VR (developed in partnership with publisher Warner Bros. Interactive and available in the UK for Playstation VR from today) is expected to have many visual treats on offer with the new format – which puts players inside the caped crusader’s suit to strike fear into the hearts of Gotham’s criminals – satisfying a number of previously unexplored audio elements was equally as high up on Rocksteady’s list of priorities for creating a fully immersive experience for the player.

Yet according to Andy Riley (pictured), Rocksteady’s lead sound designer and responsible for the audio elements of the first two Batman games, their approach and requirements were the same as they would be for any project.

“Of course when you delve deeper beyond those fundamental tenets of high concept there are huge differences with how the player physically interacts with the game,” he explains. “The most significantly different aspect is that the once detached, voyeur-like player has now stepped through the proscenium and right into the game universe.”

While the previous Batman titles have progressively increased in size – with the last title, Batman: Arkham Knight being a huge, rich, sandbox experience – Arkham VR was always going to be Rocksteady’s most challenging project to date, not to mention a more intensive and intimate experience for the player.

The new way of playing presented a unique set of challenges that Riley and the audio team had to overcome. For example, Riley says it was particularly important to position the sound emitters very accurately, “even to the point of splitting up the SFX for larger objects into discrete elements which could be placed across the body of the object, allowing us to achieve a much more believable width to many of the foreground objects”.

Experimentation with new recording techniques and processes was anticipated during the initial phase of the project, and it was Riley who was tasked with leading this initiative and adapting the overall methods to get the desired results. “Take the background ambient SFX for example; in a typical game for us the base 2D layer would be recorded in 4.0 and we have a long established setup for this workflow that sounds great,” notes Riley, who quickly realised that taking surround ambience recordings and down-mixing them to a binaural signal simply wasn’t cutting it.

“We were losing a great amount of the sense of width and immersion that was attractive in the original four channel recordings,” he adds. “So we set about testing a number of different stereo mic arrays.”

To achieve this, Riley and the audio team set up two Sound Devices recorders and five to six arrays all recording simultaneously so that they could easily be A-B’d later. They would then make a test recording that encompassed a range of sounds at different distances and positions, which could then be reviewed back in the studio on headphones. “We tested a lot of setups like this and eventually settled on our own adapted version of a Jecklin disk array custom built by one of our senior sound designers, Andrew Quinn,” Riley explains.

The physical construction of the VR device also created a few complications early on in the process, and some specific difficulty was encountered in gauging how a scene or an effect within a scene would play out. “In essence our sound design workflow is still to capture a regular video from the game which we then put into Pro Tools as a guide for designing,” says Riley. “Often we would find that things that were visually inconsequential in the capture were very much foregrounded in the game itself; there was probably a lot more iteration in a short space of time than usual.”

He also describes some challenges that he ran into with the mix itself: “Being inside a virtual world, it is almost impossible to operate complex middleware and certainly not with the fluidity required for mixing!”

Contrary to this, Riley says that the quality of game audio has increased dramatically in the last few years, and believes that the previous Arkham games owe their success in part to the development of high-quality sound over the last couple of console cycles.

“I think audio is now taken much more seriously and I’ve been very fortunate to work at studios where this is the case, none more so than Rocksteady,” Riley remarks. “From my experience, there are simply more and more great sounding games being released.”

Despite the numerous difficulties involved with developing audio for a virtual reality game and the hype surrounding such titles, Riley is confident that we will see the format come into its own in the near future, and it is likely that many sound designers in the industry will also be looking forward to exploring the impending possibilities of virtual reality from an audio perspective.