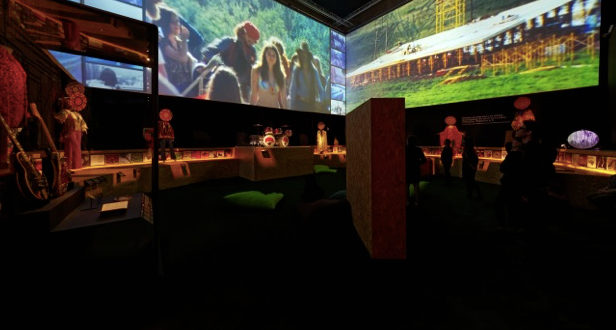 Upon hearing that Sennheiser was providing the ‘Sound Experience’ for another exhibition at the V&A on late ‘60s counterculture following the success of the ‘David Bowie Is’ project, we were eager to find out what they had in store for visitors this time.

The argument that the events of the late 1960s remain hugely relevant today is an interesting one. Whether we’re talking about global civil rights, multiculturalism, environmentalism, consumerism, computing, some say that our lives are still heavily influenced by what went on in those five crucial years: 1966-1970.

Now in place at London’s V&A Museum, ‘You Say You Want a Revolution? Records and Rebels 1966-1970’ features more than 350 objects encompassing photography, literature, music, design, film, fashion and more, with highlights including the suits worn by John Lennon and George Harrison on the cover of Sgt. Pepper’s, underground magazines from Oz to the International Times and even a moon rock on loan from NASA.

It’s a feast not just for the eyes but for the ears too, with Sennheiser providing the ‘Sound Experience’ for the project. If you were lucky enough to make it to the ‘David Bowie Is’ exhibition in 2013 then you’ll likely recognise the little grey boxes handed to you on the way in – Sennheiser’s guidePORT systems, which enable the triggering and playback of hundreds of carefully chosen audio clips as the visitor moves through the various zones – but this time the company was able to entice us further by revealing it had implemented new AMBEO technology at the V&A for added immersion.

So-called identifiers are mounted inconspicuously next to the exhibits, and some 750 receivers have been placed around the museum. Each identifier transmits an ID code, which automatically starts the appropriate audio as soon as the guest enters the relevant magnetic field. With guidePORT, digital transmission takes place in the frequency range around 2.4GHz on up to 94 different channels. The system was designed by Norbert Hilbich, with Carolyn Downing handling sound design. These clips range from extracts of famous speeches, advertising jingles and, of course, music.

“Without its soundtrack, the exhibition would be nothing,” says Geoffrey Marsh, co-curator of the exhibition alongside Victoria Broakes – they were the pair behind ‘David Bowie Is’ too. “We realised with the David Bowie exhibition that it is possible to make the museum experience a lot more exciting for visitors. One way to do so is by providing them with headphones that play the appropriate song for each topic or space.”

As for AMBEO, the main room at the exhibition where it really comes into play is the space dedicated to Woodstock 1969. Here, a 14.1 system and large-scale projection help recreate key moments from one of the most famous live events of all time, including the iconic Jimi Hendrix rendition of Star Spangled Banner, in a fully immersive environment.

“It wasn’t just about having a fantastic sound quality at this exhibition,” Marsh continued. “We wanted to convey how the music was listened to. It was a privilege working with the sound engineers who came from Hanover and installed this incredible sound system. It has an enormous influence on the listeners – it makes the hair stand up on the back of your neck.”

The importance of the exhibition to Sennheiser was demonstrated by the presence of co-CEO Daniel Sennheiser at the preview launch on 8 September. In a speech to the assembled visitors on the day and talking to Audio Media International afterwards, he explained how the company, which states how its mission is to ‘shape the future of audio’, feels it has a duty to support innovative projects like these, and that 1966-70 was in fact a significant period in the firm’s history, making it the ideal branding opportunity as well.

“It’s about being a good citizen, taking responsibility and supporting things like this because it gives us the possibility to expose the brand to a target group that isn’t already a Sennheiser buyer,” he said. “Sennheiser has been around for 72 years and we say we shape the future of audio but it isn’t just a claim, we have proof like the HD414 in 1968, which was the first music headphone of its kind and the different microphones that we’ve developed over time, revolutionary shotgun microphone systems etc. Once in a while you have to prove that you are not only just able to envision the future.”

The aim of this particular experience is not just to stir the audiences senses, but to make them think too, and ‘Revolution’ certainly does that. Co-curator Victoria Broackes concluded: “Every visitor should go home with a question in the back of their mind: what revolution will be next?”

‘You Say You Want a Revolution? Records and Rebels 1966-1970’ is scheduled to run at the V&A until 26 February 2017, after which it will begin touring internationally.