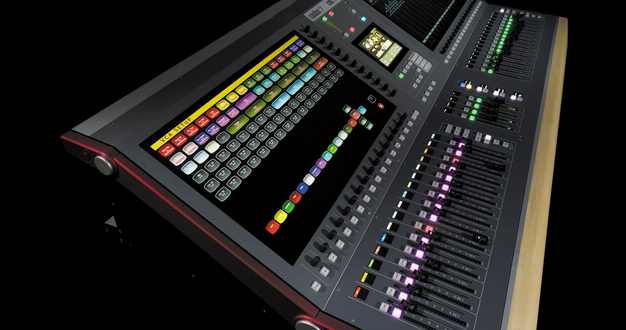 Cadac is launching a new addition to its CDC series of digital consoles at the AES Convention in LA.

The CDC seven follows on from the flagship CDC eight and medium-format CDC six, providing all of the power and ‘operational simplicity’ of the CDC six with the enhanced production capabilities of an expanded dual 23.5in 16:9 hi-definition touch screen, 36-fader control surface.

It maintains all of the feel and familiarity of the CDC six, however the CDC seven doubles up on both the large-format LCD touchscreen, with its associated encoders, and the physical fader count – expanding the number of inputs to 96. The console also retains the CDC six’s 56 busses; 48 of them configurable.

The high contrast LCD touchscreens display the same ‘high-agility’ swipeable graphical user interface. The encoders immediately to the right of and below both screens further encourage the instinctive use of gesture – touch and swipe – operation to navigate and operate the console. A third centrally mounted 6.5in LCD touchscreen provides system control. The dual screens allows multiple tasks to be displayed and controlled simultaneously; for example, the VCAs can be viewed on one screen while the inputs to the VCAs are shown on the other. The faders and encoders naturally follow the GUI displayed on the individual screens, resulting in further increases in the speed and flexibility of the workflow, according to Cadac.

The CDC seven’s intuitive human interface and feature set are designed with the primary intention of aiding the workflow and giving the engineer full creative freedom. These features include Cadac’s Monitor Mode with Mix Focus, as well as the ability to create custom fader layers. All 36 motorised faders on the CDC seven feature stereo metering and a full colour user definable OLED display.

The CDC seven uses Cadac’s MegaCOMMS digital audio network, which is designed to meet the requirements of the most challenging production and system installation applications. Cadac says its audio protocol enables total through-system propagation delay from inputs on stage to outputs, including all console processing and A-D/D-A conversions, in 37 samples (@ 96 kHz), or just under 400μs, which it claims makes it the industry’s lowest latency protocol. The console offers 16 creative onboard stereo effects and comes preconfigured with an integrated 64 x 64 Waves interface; this allows direct connection to a Waves MultiRack SoundGrid server with access to the company’s vast library of effects, and also facilitates multitrack recording straight to a laptop.

Nick Fletcher, director of R&D at Cadac, stated: “As a result of the continual development of our innovative user interface, industry leading latency management system and unsurpassable audio performance we believe the CDC seven offers an incredibly attractive proposition for those who want something that stands head and shoulders above the norm. In addition to which, we are offering all this at an extremely competitive price point.”