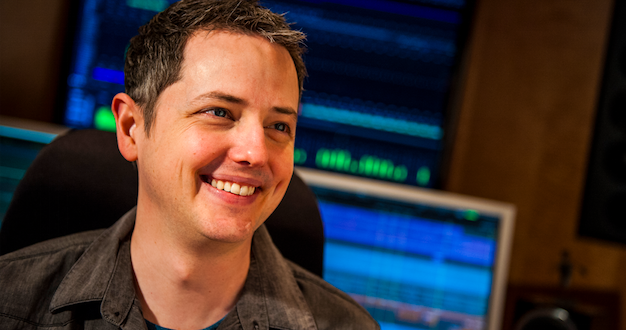 Known for creating the soundtracks to a number of top-selling video games, the composer chats to Colby Ramsey about working with Oculus on Farlands, his first VR title.

How did the opportunity to work with Oculus first come about?

Oculus was doing a lot of demos at conventions and I did some music for those first, probably around a year and a half before this game came about, so I’ve also been working with them in a smaller capacity to this extent. Something I love the most about the games industry is the comradery and relationships that you form with these folk.

How did you approach the Farlands soundtrack and how did it differ from previous projects?

Farlands was unlike anything I’ve scored before. It’s more of an observational sort of game, where the player explores different locations and takes pictures on this otherworldly planet. There was no combat compared to some of my previous projects like FarCry Primal and Dead Space, so it was more of a straightforward, linear version of the music instead of something stacked up vertically.

What we really wanted to focus on was the consistency of the soundtrack as opposed to the way it changes if you interact with something. With VR you’re entering so many new dimensions and spaces in terms of the visuals and the sound, so right now it’s like the wild wild west of games all over again.

It was important that Farlands’ music did not call a lot of attention to itself. It is still interactive – changing depending on the time of day and as things happen in the game – but takes a lot more of a backseat role. The 3D audio is slightly spatialised but it’s also done subtly and tastefully.

What particular techniques/processes did you use to achieve your objective?

A lot of it was being able to do the opposite of what I normally concern myself with. I was able to write a piece of music that was maybe five, seven or eight minutes long, and have it ebb and flow naturally. Usually if there is a combat track combined with an exploration track there are points where it gets louder and quieter, but this was basically all exploration, and so I had a lot of freedom to create layers that would come in and out.

The idea is that you can then play them all together to get the soundtrack; however, I delivered all the instruments separately to Oculus, so they had the control over when instruments would play and more importantly where they were coming from. This comes back to the spatialisation that Tom Smurdon and the Oculus guys worked on to make it sound 3D, but also very natural.

Being a percussionist, I love different kinds of sounds. With Farlands, it’s in the future in space with aliens so it needed to have a sci-fi-esque, yet organic sound to it. A lot of the instruments you hear are things I played here in the studio – guitars, steel drums and some other crazy things – which were then either layered on top of each other into these swirling clouds or given a lot of delay and reverb to create this space aspect. You have this analogue organic source that’s been treated with some fun processing and it gives it that sci-fi edge. I pretty much did a song a day for the Farlands soundtrack.

Could you tell us about your personal studio and some of the kit you have in there?

I built my own standalone recording studio about five years ago, full of microphones set up ready to record along with multiple amps for guitars and drums. I have about eight to ten mics in my main room – some small tubes, some large diaphragm tubes including the M149 from Neumann, and lots of ribbons.

I like recording as much as I can live, which then goes into a tube mic and through an outboard EQ and compressor. I also have many preamps at hand to use. Analogue goes in, I treat it digitally as needed, and then analogue comes back out – to me that’s the best of both worlds.

I use Pro Tools, Cubase, Digital Performer and Ableton depending on what I need. I’m in a big treated space with some giant Dynaudio M3 speakers and Bryston amps. I also have plenty of outboard synths and I love the Push 2 controller from Ableton.

What do you feel is responsible for the increasingly important focus being placed on game audio and game soundtracks?

A large part of it is that every year the industry is maturing. Music falls in line with graphics capabilities, so it comes down to the hardware and what it can support. Originally, it couldn’t support big orchestras – it had to be 8-bit sounds. We’re now in a kind of renaissance of game hardware where audio directors are trying to push the envelope creatively in the same way that hardware has allowed us to push it from a physical standpoint. It’s one of the things I love most about working in games besides the relationships you build – all these creative opportunities.

Previous Dan Dugan clarifies use of name by other manufacturers
Next AES 2016: Cadac to showcase CDC seven