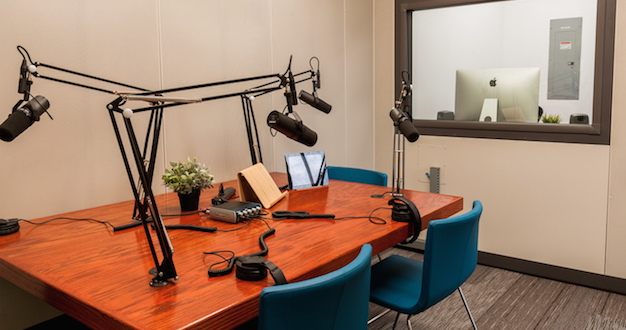 Over here in little old England, many of us have been aware of the ‘podcasting boom’ on the other side of The Atlantic for some time, but it wasn’t until new research emerged that it became clear just how big this ‘boom’ really is.

It is estimated that around 21% of the entire US population – approximately 57 million people – now listens to podcasts monthly, and it’s not just the demand for this kind of content that has skyrocketed in recent years; the number of individuals looking to record and produce material for podcasts has also risen dramatically.

The trouble is, it’s not always easy to find a place to record and produce a good podcast. Certain home setups may be enough to satisfy basic requirements, and many professional recording studios will offer booths fit for this purpose, but what a lot of podcasters would prefer in an ideal world is a dedicated local spot where the work can be done affordably, with the right gear and layout, where they can be surrounded by like-minded people.

This was the thinking behind the PRX Podcast Garage, a new audio and media arts training facility in Boston, Massachusetts, built for this very purpose. At the Garage, owned and operated by public media company PRX and acquired with help from the nearby Harvard University, emerging and experienced podcasters are given access to recording studios, free co-working space and educational and networking events. The arrangement consists of a larger studio that can record up to four people, plus a smaller sound booth for vocal tracking, and producers are welcome to bring an engineer or self-operate the control room.

Giving users the ability to drop in and work on projects as and when it suits them – potentially learning new skills during their visit – was very much part of the main objective, according to Chris Kalafarski of PRX.

“We have a lot of experience making audio. We produce a ton of shows and have a lot of expertise on the production side, but we didn’t really have a place on the ground where you could walk into a studio and make stuff,” he explains.

“Harvard said they have this spot that they could get us a great deal on if we built something community focused, make it exciting and get people in there, and so when we heard about that opportunity we said ‘this is the kind of thing we’ve always wanted’ – somewhere to take all that expertise that we’ve built up over the past ten years and find a way to give it back to the producers and the people out there who need that kind of help – or even just the space, if they already know what they’re doing.”

PRX also thought about those who aren’t strictly podcasters, but would still benefit from having somewhere like the Garage close by.

“There are a ton of independent radio producers and people producing audio content for broadcast public radio and we’re trying to meet their needs too,” Kalafarski continues. “They might want to do tape syncs or bring someone in for an interview with no intention of it ever turning into a podcast, and because they’re independent they don’t have a studio or an office that can go into everyday. For people like them, the combo of a studio and co-working space is a really good fit.”

As for the gear choices that were made by the team, it seems that many of the decisions were not easy, even though a kit list for putting together a podcast tends ?to be a lot shorter and more straightforward than for most other studio-based activities.

“There are Shure SM7Bs for the microphones, which have a good sound and you don’t really need to know how to use them. Most people who come in don’t have the best microphone technique so we wanted something that was fairly forgiving but gave you good presence,” reveals Kalafarski.

“The one thing that was a big decision was the mixing board. We talked to a bunch of people on the broadcast side and the podcast side, and the question was do you go with something that’s more like a broadcast board, so if somebody brings in an engineer who’s used to that kind of setup they would be more familiar with it; or do you go with something a little simpler, so a home podcaster wouldn’t be too intimidated by all the knobs and features?

“What we ended up going with was an Allen & Heath Qu16. One of the big questions was ‘how frequently are people going to be bringing in an engineer?’ In the radio world there’s always an engineer but in podcasting that’s not really common. We wanted to make sure we had something that would work in both situations.”

Other highlights include Sennheiser HD280 headphones throughout, AudioBox iTwo USB 2.0 interfaces and HP-4 headphone distribution amplifiers from PreSonus and Genelec 8010 studio monitors, along with Pro Tools and Hindenburg software.

The Podcast Garage only got up and running in the first week of August, but “the response has been great” so far, according to Kalafarski, who calls it a ?case of “perfect timing” with the podcast craze showing no sign of slowing down any time soon.

“There were so many things that were aligning over the six months that we were working on this that it felt like a great decision and the right thing to do, and why we spent so much time and resources getting it right.”