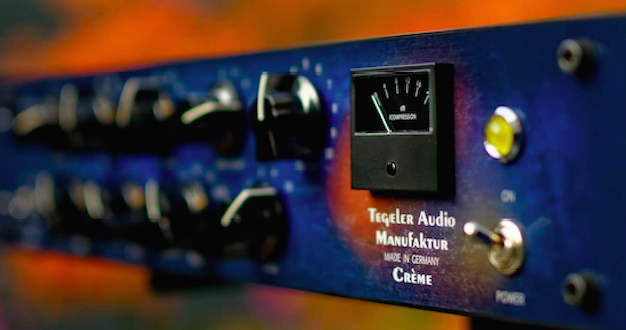 Wes Maebe gets his hands on this tasty new tool, which offers a combination of a Pultec-style EQ and bus compressor.

There’s something comforting and reassuring about German-built things. Growing up in Belgium and spending a lot of time in Germany, I learnt a saying that’s always stuck with me: Deutsche gründlichkeit – German efficiency. The units made by Tegeler Audio Manufaktur just ooze that sentiment.

In his early years, Michael Krusch was tinkering with synth modules in order to improve his old home computer and analogue drum machine. This inevitably led to him catching what he calls the “electronics bug” and he set out to recreate some of the all-time classics, not in software but hardware format. After his buddies and studio colleagues asked him to build boxes for them, he decided to turn it into a business and Tegeler Audio Manufaktur was born.

The company is located north of Berlin, in Tegel, which you may know because of the airport or AEG’s Borsig locomotive factory. Before we have a closer look at what I think is one of the best compressor/EQ combos around, I’d like to point out that all Tegeler Audio Manufaktur units are hand-built with top quality components.

The Crème of the crop

So let’s have a look at the Crème’s front panel. Starting at the top left there’s the unit bypass, followed by the EQ section. Tegeler has obviously done its research and it has become clear that what engineers want from a unit they strap across a bus is a killer compressor and a simple EQ with low end for that fat and round sound and top end to deliver the air and sheen in the higher register of the mix. Therefore the EQ is very stripped back. But don’t let its simplicity fool you – this EQ gives you exactly that warmth and defined shimmery top end of the famous Pultec we’ve all come to love.

Both low and high boosts are stepped in 1dB clicks, giving you 5dB each of boost. The low frequencies range from 20Hz to 200Hz and the high set goes from 10kHz up to a lovely open 24kHz.

The lower half of this 2U stereo channel houses the compressor. You can choose to put the EQ pre or post the compressor and an additional three-way switch (60Hz – 120Hz – full range) allows for high pass side chain filtering to remedy any unwanted LF pumping. Next along is the Threshold, the Attack ranging from 0.1 to 30ms. Release times from 0.1ms to 1.2 seconds and an Auto setting, followed by the Ratio pot, giving you 1.5:1 to 10:1. Finally, there’s another pot for the make-up gain. To top it all off there’s a very familiar looking backlit Gain Reduction meter, a nice and chunky power switch and warm yellow power light which complements the blue colour of the whole unit very nicely indeed. I’m not going to spend a section on the back panel. I love units that are simple and old school. The Crème has two male input XLRs, two female output XLRs and an IEC. Plug and play!

The answer is a resounding YES. I’ve used the Crème on a vast variety of material now and it works across the board, be it full-on rock, hip-hop or pure classical.

The biggest ‘wow’ moment happened on a mix session I did for Elliott Randall. We’d rescued a 2in multi-track from his lock-up in New York containing a track with the one and only John Belushi on lead vocals. Elliott had always wanted to replace the band performances so we re-tracked everything to John’s stellar vocals and proceeded to mix what is now known as Honey Do. The Crème had just been delivered and had already made its big sound heard on several mastering jobs. So, I suggested we use it on the master mix bus of this new old track. Mixing was done, everything was in place, minus a few tiny automation tweaks. In keeping with the whole analogue character of the tune, we strapped the Crème across my main mix insert. I used a little low end at 30Hz, a bump of 24kHz to add some air and the compressor was tickling the signal with a slow attack, fast release and a subtle 1.5:1 ratio.

The result was absolutely stunning. The mix we were already very happy with suddenly came to life and everything just ended up sounding glued together. To quote the producer and artist: “It’s like mixing to tape!”

Simply put, this was the mastering and blues/rock mixing material comfortably nailed. Now I had to try it on some other stuff. I went into RAK Studios to record and balance a classical piano record for Parker – another analogue-only affair with a gorgeous Steinway and RAK’s Neve VRP Legend. Once again the unit brought some extra character to the mix, without coloring anything too much.

And for all the heavy beat programmers and hip-hoppers out there, this box is going to blow you away! Put the Crème across the drum bus and those hits will jump right out of your monitors. The bottom end will sound super tight and ballsy, the high-end crisp and open and the compressor will make the whole section groove.

Let’s face it, we all have our favourite go-to units. For certain applications some boxes do a better job than others. So far, the Tegeler Audio Manufaktur Crème has proven to excel in most tasks I’ve given it. It is, in my opinion, one of the best compressors I’ve heard in a long time.

Manufacturers release new equipment on the market at lightning speed and I generally struggle to justify the expense to add another piece of gear to the list. They’re usually as good as what I have, so there’s not really any point in acquiring it. This compressor/EQ combo has won me over. It feels like it treats your hard recording and mix work with the greatest of respect and musicality and I am convinced that over time Tegeler Audio Manufaktur will find itself in the list of all-time classics.

Time for me to go and Crèmefy another mix.