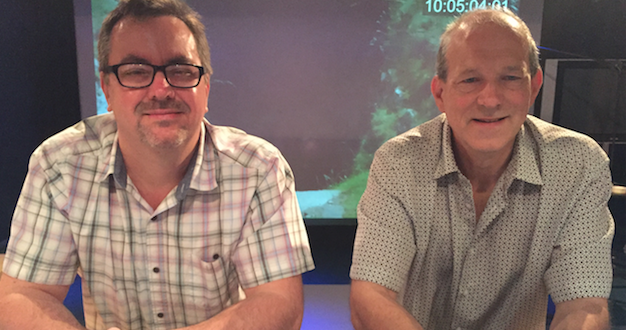 Something quite remarkable about Bang Post Production is that it is a company born out of comradery and loyalty. Over the past ten years the business has evolved from just two – albeit experienced – sound editors into a full post facility, and it has added two national BAFTAs, an Emmy, two Welsh BAFTAs and an RTS Award to its list of accolades.

Doug Sinclair (pictured, right) and Paul McFadden (left), who have been working together since the late ’80s, secured their reputations in the TV industry while collaborating on the BBC’s Doctor Who in 2005. In a bid to facilitate their growing workload on the popular TV series and further their own ambitions, the pair formed Bang, and moved into their current premises in Cardiff, Wales in 2007.

Today, both men hold a very active supervisory role within the firm; Sinclair, along with sound editing, deals with more of the business side while McFadden has recently been responsible for a lot more mixing on feature films and network dramas, as well as ADR.

“It was brilliant working on Doctor Who,” explains Sinclair, “but we wanted people to know that we were available for independent work.”

“We now have a strong core team here,” McFadden adds. “It’s more of a family and because we’re quite small, we provide a personal, boutique touch to marry up with our creativity.”

A studio that prides itself on its attention to detail and storytelling, Bang is able to handle all elements of a project, “although we do have clients who will only require one aspect – either the sound or picture – and the picture side of the business is growing as we speak,” notes Sinclair.

Bang’s most notable credit of late, and perhaps one that has gleaned it the most industry recognition, is its work on the well-known TV drama Sherlock, which was shot on location in Wales. The Bang team had already established a relationship with writer and producer Stephen Moffat from their time working on Doctor Who, so this was where the venture began.

“A producer/director friend of mine, Philippa Collie Cousins, went to head up Hartswood Films West in Cardiff, so that was my way in,” explains McFadden. “Through that we managed to get in contact with Sue and Beryl Vertue, who came to see our facilities on one cold rainy night in Cardiff.”

According to Sinclair, the guys at Bang have since built up an incredible relationship with Sherlock’s production team over the last three series, and are extremely proud to be a part of such a massive global hit from the very beginning.

“Sherlock is a show that lends itself to complex and detailed soundwork because it is so visually rich as well,” says Sinclair. “I would hope that, as a result, people identify with the quality of our work and it has brought some wider recognition to the area. I think Doctor Who really showed that the creative sector in Wales can handle big shows like this.”

McFadden explains that while there are sound facilities in Cardiff that take care of other markets, Bang focuses primarily on high-end TV dramas and feature films, and is always looking to bring new work to the local area.

Travelling to and from London over the years means Bang has forged and maintained a plethora of contacts in the capital, aiding in its mission to canvas business from new markets and transform Cardiff into a centre of excellence for BBC TV dramas like Torchwood, which it had also worked on. The added through-fill of work in the area has undoubtedly sped up this evolution, partly influencing Bang’s decision to add the picture department to the business, which is growing steadily as a result.

“We had a lot of clients who enjoyed working with us on sound who felt that if they could complete the whole thing at one facility, it would be a big bonus for them,” Sinclair continues. “Most recently we worked with TV director Euros Lyn on his first feature film, for which we did all of the sound and the picture.”

Yet the guys at Bang are keen to expand their scope further into game sound design, which has become the most recent element of the business in the last few months. “Two of our staff, Jon Joyce and Jamie Talbutt, are leading the expansion into game audio and have already completed some exciting projects,” Sinclair adds.

With such an already well-established, well-equipped base of operations, it comes as no surprise that the guys at Bang are looking to branch out further into the industry.

“We made the decision very early on not to go down the large-format console route because of our freelance background, and to mix everything in the box,” explains McFadden.

Pro Tools HDX2 is Bang’s system of choice, with a 32-fader D-Control, JBL 4000 series monitors, Yamaha P7000 power amps, and a vast array of plugins in the main 5.1 Dolby Digital theatre, along with an Avid Media Composer for pictures using Video Satellite mode.

Bang’s Theatre 2 also runs HDX2 albeit this time with a 24-fader D-Command, with an almost identical software package to Theatre 1. “This allows us to do mixes within their own right in this room on Dynaudio Air 15 monitors,” remarks Sinclair. “It also allows us to premix and do deliverables for shows that are in and out of the main theatre.”

Also in this second theatre is a Dolby Atmos domestic setup – using a local renderer software to monitor and premix Atmos – which Bang used on the Blu-ray DVD version of the Sherlock: The Abominable Bride special episode.

Additionally, Bang’s picture deparment – headed up by Steph Lynch – can handle all online, offline and grading elements of a project. They also have a fully equipped foley stage. “In ten years I think we’ve achieved a lot,” says Sinclair. “We’ve done tracklaying and Foley in this room for a lot of big network dramas where we just supply that as a subcontracted element.”

The pair believe that, over the last decade, they have really transformed Bang into what they originally aimed to achieve in terms of client relationships and workflow.

And as Dolby Atmos becomes more accepted in the domestic market, the guys at Bang are hopeful that more projects, particularly the high-end dramas that they specialise in, will head in that direction.

“It’s been a wide pallet of work; with more dramas increasingly being shot in Wales it’s an interesting dynamic for us going forward,” McFadden comments. “We envisage getting more Dolby Atmos mixing through the theatres, and believe this is the next big thing so we are really trying to push the production companies in TV to go down that route.”

“There’s a lot of theatrical Dolby Atmos mixing out there but we want to go for more the TV market here,” adds McFadden. “We have lots of potential feature films coming in so the future’s looking great. I think it’s the most positive we’ve been in our ten years.”

In terms of upcoming work on network dramas, the pair at Bang are looking forward to starting on Decline and Fall for Tiger Aspect and Euros Lyn’s Our Loved Boy for Minnow films about the tragic tale of Damilola Taylor. “The second half of the year has really kicked off,” remarks Sinclair. “It’s been an incredible journey and we look forward to another ten years.”

McFadden concludes: “Having strong ties with the Welsh government and working with them in their bid to develop Wales as a filming location to not only shoot here but to post here as well, is extremely important. It’s a very exciting time in general for the TV industry down in Wales and we’re privilaged to be at the forefront of it.”