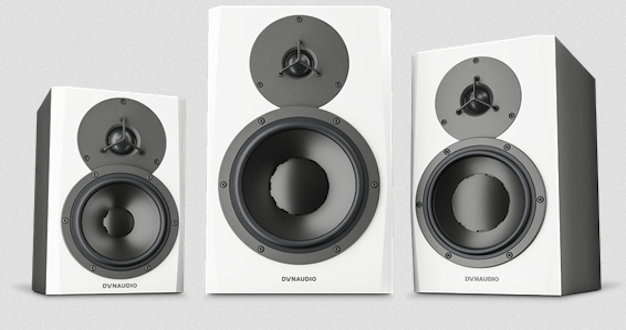 Nigel Palmer takes a look at this mid-level model from the Danish company’s new range of nearfields.

Since 1977, Danish loudspeaker manufacturer Dynaudio has carved an enviable reputation in the pro-audio world – its BM series has become the nearfield monitor of choice in studios around the globe, and larger speakers such as the M3 have also proved a success. Noted for using its own drivers, the company has branched out into car systems for Volvo, Volkswagen and Bugatti and has a domestic Hi-Fi range.

Introduced earlier this year, the new LYD speakers are intended as successors to the BM line. Billed as ‘low volume precision monitors’, there are three models: LYD 5, 7 and 8 (with 5in, 7in and 8in low-frequency drivers respectively) each with clever but unfussy DSP control to tailor performance to your room. The LYD range may be paired with the company’s BM9S II (10in woofer) or BM14S II (12in) subs for extension to 29 and 18Hz respectively, although for the purpose of this review I put an ‘unsubbed’ pair of LYD 7’s through their paces.

The LYD 7 presents an almost ‘lifestyle’ face to the world with a neat white front baffle on a black MDF-style enclosure. The baffle’s edges are bevelled to reduce audio coloration from sharp angles – the usual solution to this is to round the edges off at the front of the speaker, but bevelling appears effective in this case and is no doubt straightforward to implement. The speaker weighs in at a console bridge-friendly 8kg and measures 186 x 320 x 296mm; the driver complement in this two-way, rear-ported design consists of a 7in Magnesium Silicate Polymer (MSP) coned woofer – a material that Dynaudio often uses, and which, according to its website, “combines low mass, high rigidity and ideal internal damping properties” and a 28mm soft dome tweeter. Two 50W Class D amplifiers – one for each driver – provide amplification; Class D is currently a popular choice in active loudspeakers due to its neutrality of sound, efficiency and low heat output – the LYD 7’s rear panel doesn’t need a finned heatsink, for example, and remained just above room temperature throughout the review period.

Talking of the rear panel, this is where the DSP control is accessed, together with input and power status. To the right of the analogue XLR and phono inputs are a group of five switches – two above (either side of a power LED) and three below. At top left is Sensitivity, which determines input gain in three positions: +6, 0 and -6dB. I left this at 0 as it conformed to my usual setup, but the range available should cope with any typical signal. Next up is Standby Mode. When set to On, power is controlled from the mains switch below in the usual way; engaging Auto shuts the speaker down unless a signal is sensed at the input. Then there are the three DSP switches, the first of which is Bass Extension, marked +10, 0 and -10Hz. The idea is that if you typically work at a volume level between the early ‘70s and mid ‘80sdB as many do, engaging the -10 position extends bass response to its widest, enabling the full published 45Hz to 21kHz (-6dB) range of the LYD 7; if you want to go louder before overdriving the speaker, the other two positions offer progressively rolled off bass to 55 and 65Hz so you can choose your trade-off accordingly.

The next switch is Sound Balance, a feature whose implementation I haven’t come across in a loudspeaker before, but one I think we might see more of in the future. It’s a tilt or Niveau filter with three positions: B, N and D for Bright, Neutral and Dark. I regularly use this kind of processing when EQing in mastering, and it works by taking a central point at around 1kHz and rotating the higher and lower frequencies around it so that as you increase brightness you simultaneously reduce anything below the rotation point, and vice versa. Although according to the frequency plots provided the LYD 7’s tilt filter only moves spectral content about a dB either way at the extremes, this is sufficient to help adjust the speaker’s response to suit the room or the listener’s preference better with a brighter or darker sound where required. After some experimenting I stayed at the Neutral position, but the power of the feature is undeniable and should win friends for the LYD 7.

The last DSP switch is Position. Its two options, Wall and Free, tailor the frequency response based on how close to a wall it is, as the closer you go the more the low frequency response will rise. At Lowland Masters, because of the size and design of the mastering room, things generally sound best with speakers within 50cm of the back wall. Once the LYD 7’s were positioned, engaging Wall brought the sound into focus at the low end in a simple but effective way.

Dynaudio suggests that these speakers should be used in a listening triangle not larger than 2m in order not to push them harder than intended, and the review pair were duly placed on stands about 1.9m apart. Playback sounded a little ‘pinched’ to begin with, so I ran them in for some hours with a range of music towards the top of their comfortable volume range, and was rewarded with a clearer sound and greater bass extension. The crossover frequency of the LYD 7 is quite high for a two-way at 4.3kHz (I would typically expect something up to an octave lower), so the woofer is working harder than usual to cover the critical vocal range. This it did with aplomb – female and male voices alike coming through with commendable clarity, including Alison Krauss on Sister Rosetta Goes Before Us; Tony Lewis’ stratospheric tenor on The Outfield’s Voices Of Babylon; and the gruffer tones of ZZ Top’s La Grange.

I don’t think I’m alone in feeling that more than a few current loudspeakers are voiced on the bright side, and I regularly find myself adjusting accordingly when doing speaker reviews. Not so with the LYD 7 – sporting a refined high frequency performance with no hint of the splashiness that troubles some designs, the soft dome tweeter tops off the overall balance very well. It certainly helped on The Mavericks’ Dance The Night Away, which has a notably bright-and-subby mix capable off taking your ears off on an over-shiny sounding system. Listening on, it was clear that in spite of the necessarily restricted low frequency handling without a sub of these bookshelf-size speakers, they still did a pretty good job of telling you what’s ‘down there’ – I didn’t notice any obvious vices such as peaky boominess or one-note bass from the rear-firing flared port, and listening to Jamie Cullum’s These Are The Days, which has a well recorded and deep-sounding double bass, gave a balanced and musical account on the Dynaudios in spite of not being able to cover all the fundamentals.

Although showing a slight tendency towards congestion on more complex musical signals, I thought the LYD 7 performed well – bearing in mind its design parameters and price point – and it put a smile on my face with its lively and informative presentation, which I’d have no difficulty recording and mixing effectively with. Small two-way active monitors are an area where there’s no lack of choice for the audio professional these days. That said, with the LYD 7 Dynaudio has clearly leant on long experience and also knowledge of how to build to a price point, and produced something that demands listening to against the competition if you’re currently buying. 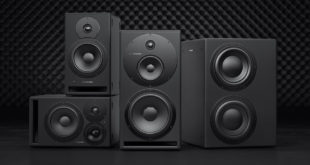