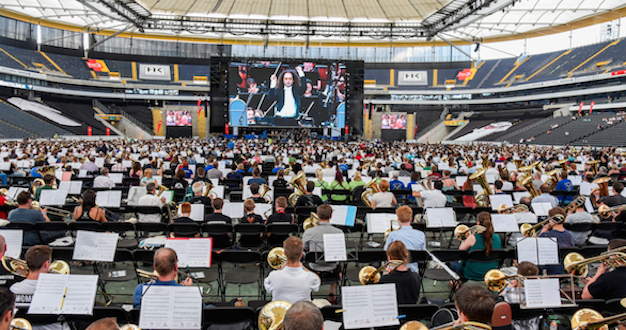 Back in July, thousands of amateur musicians descended on Frankfurt’s Commerzbank-Arena with the aim of uniting in concert as the largest orchestra ever assembled. Adam Savage went along to see the record attempt unfold, with the help of a specially selected sound solution…

It goes without saying that any kind of live music concert at a world-class stadium requires a substantial audio system, but for what was probably the largest deployment of HK Audio loudspeakers anywhere to date, there was a lot more to think about than just the size of the setup.

For around six weeks earlier this summer, the 50,000-plus-capacity Commerzbank-Arena in Frankfurt played host to a wide variety of public events, including mass viewings of Euro 2016 football matches on the largest screen in Germany and numerous one-off shows and performances from some of the nation’s favourite artists. This culminated in the Wir füllen das Stadion (We’re Filling the Stadium) grand finale on 9 July, where a total of 7,548 musicians came together inside the arena to successfully break the record for the world’s largest orchestra playing the same piece(s) of music in one place. The previous record was held by a group formed in Australia, where 7,224 instrumentalists joined forces at the 2013 Queensland Music Festival.

The system in place needed to cover the vast main floor area used to accommodate football fans on match days, thousands of musicians during the world record attempt and the crowd that gathered for the concert that brought it all to a close, with the expectation that it would be capable of distributing everything from classical to heavy rock and clear speech for the match commentary and announcements on the concluding weekend.

It’s no surprise then that HK Audio’s top-of-the-line solutions – Cohedra and Cohedra Compact – were brought out for the occasion. As well as having the power, HK’s big guns have proven themselves in similar scenarios in the past, as the company’s product manager for rental and installation, Marc-Oliver Mayer, explains: “We chose these two systems because they are simply the biggest line arrays in our portfolio and such a huge venue needs a big, accurate and powerful pro-audio setup. Also, Cohedra is loved by the classical scene because of its acoustic, natural response and behaviour. Cincinnati {Symphony & Pops} Orchestra, Carmina Burana and Händel Festspiele are just a few examples of where this system has been used successfully.”

“As Cohedra and Cohedra Compact aren’t brand new systems on the market, we have experience of what they can deliver and how they perform in different situations. So, as expected, they were doing their job very well.”

Although there was no change in the delay arrangement throughout the ground for the duration – 36 x CDR 208 S/T and 20 x CDR 108 spread across four positions – it was necessary to make alterations to the main rig facing the infield as the Commerzbank-Arena switched from broadcasting matches to putting on the main event. Therefore, what started as 2 x 24 CDR 208 S/T hangs paired with 2 x 12 CDR 210 F sub hangs situated as far out of sight as possible was scaled down to an array of 16 208s a side that had been moved 16m further into the audience area for the second part of the job.

Getting the actual configuration right for all situations wasn’t the only thing that the team had to really think about carefully, according to Mayer: “The biggest challenge was the large reverberation time of about eight seconds at low frequencies in the empty stadium, so we had to work with delay lines to transport as much direct sound to the listeners as possible. The lounge seats especially were important, because as usual, these are the most expensive seats.

“Another challenge was the demand for high speech transmission for the soccer public viewings on the one hand, and good acoustical performance for Top 40 cover bands, club music and last but not least the orchestra on the other. But our systems are capable of these requirements and the local rental company did a great job, so it wasn’t really a big problem.”

Finding the optimal setup for any venue, let alone one of this size, is never easy, but using AFMG’s EASE Focus 2 acoustic simulation software did make the process that little bit simpler, Mayer reveals: “In general, without such a tool it would be an expensive trial and error process. That’s why it became a standard in the pro-audio world today. Our simulation in advance showed us exactly the sound pressure levels we could expect in the stadium. After the setup we only had to tweak a little bit here and there and that was about it. The final results were very good, as previously expected.”

The celebratory concert featured several artists well known across Germany, such as Angelo Kelly, and many in attendance may have also recognised the man in charge of keeping more than 7,500 orchestra members in sync, Wolf Kerschek, who had this to say when asked to express his thoughts on the occasion after a practice session: “It’s an incredibly special day. I’ve never heard anything like this. I’ve never heard a sound like this and I’ve never had an experience like this – and we’re just talking about the rehearsal.

“It’s about sharing the idea of music, playing together and really exchanging emotionally.”

It wasn’t just the inside of the stadium that was equipped with HK kit; the brand’s gear, including the new Linear 5 LTS passive speakers unveiled at ISE 2016, could be seen and heard at additional performance spaces all around the venue’s exterior and in adjacent park areas on the weekend of the record-breaking concert as well.

“The big stage on the one end of the green was powered by a double headstack per side of our Linear 5 LTS system, which includes our new so-called Multicell Transformer that gives LTS its name as a Long Throw System. And that’s what it does in reality – it makes a superb real long throw with a high SPL, it has no distortions in the audible range and it is packed in a very small enclosure,” says Mayer.

In the engine room

HK Audio also took the opportunity to introduce its next generation power engine during AMI’s visit. Designed for use with speakers across the HK range, the new Power Racks consist of PB-8 patchbays and Lab.gruppen PLM+ 12K44 amplifiers – 24 of these were utilised at the Arena – chosen for their power, sound quality, flexibility, the brand’s acceptance across the market, price point and more.

HK’s PB-8 offers four analogue inputs and thrus with a separate ground lift switch, as well as two AES3 and Ethernet connections, four NL4 Speakon connectors for the amp output channels and an NL8 for all four amp channels.