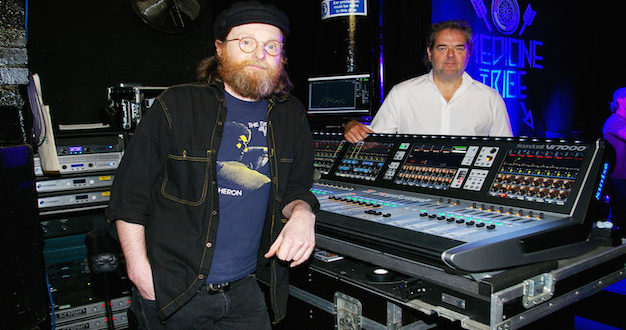 This summer it replaced its two long-standing Soundcraft Vi6 consoles, which form part of a complete Harman sound reinforcement package, with the latest Vi7000s from UK and Ireland distributors Sound Technology – one at FoH and one for stage monitors.

The upgrade met the approval of technical manager Tim Hamper (pictured left) and senior sound engineer Eddie Puhl. “The old desks served us brilliantly for nearly a decade and this has been a seamless and logical transition,” explained Hamper.

The two Vi7000s were supplied with local racks and Realtime Racks, featuring the suite of UAD plugins, which provide classic analogue emulations.

The familiarity of the platform meant that both Hamper and Puhl could jump onto the new desks immediately. “We had a new Vi3000 on loan, which was a fantastic introduction to the new series,” Hamper continued. “The new desks sound way better than the previous models – they are much faster and a lot more integrated. These days we need to spend far less time teaching sound engineers about the desk; they just come in with their show files and plug in.”

According to Hamper, it is also an ideal desk for festivals, “It’s very fast to jump onto, and if you are doing, say, a five-band show you don’t have to go through pages of set-ups. Also, it’s based around the same DSP cards, and seeing the old BSS DPR-901 is like meeting up with an old friend.”

Larry Seymour, COO of Mint Group (pictured right), added: “We will continue to keep our equipment at the cutting edge and returning technical crews notice this. From its DNA to its physical appearance KOKO offers a lot, and when you overlay the technical capabilities it adds lustre to any event.”

Hamper concluded: “Soundcraft seem to have addressed all the angles with these new desks and we have received many favourable comments.”