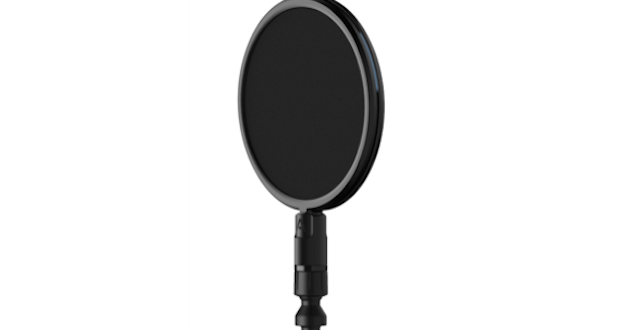 This new brand reckons it’s solved one of the most common problems associated with this kind of mic accessory, but does Simon Allen approve?

In general, pop filters aren’t a subject we spend much time thinking about. We all know we need one and why, especially when recording closely-miked vocals. So why are they one thing that can really stall a session?

With so many other things to think about such as the type of microphone, mic placement, preamp choice and the recording chain, if the talent has their words and feels comfortable (which normally includes a special tea with honey and lemon, or the air-conditioning set just so), the pop filter is the last thing on anyone’s mind. Then you finally get everything in place and the good takes start coming, when suddenly there’s a drooping issue. You try strategically placing a music stand, or wedging the filter against the suspension mount and almost voiding its purpose, or even resorting to ugly gaffer tape just because it won’t quite hold – we’ve all done it. Surely there has to be another way?

The team at Pop Audio believe they have the answer. Not only have they tried solving the common drooping issue, but by applying some fresh thinking, their new pop filter has a few party tricks too.

So you’re probably wondering what there is to say about a pop filter. Well, in the case of Pop Audio, there’s more than you can imagine. What’s more, this is one of those products that brings many obvious features neatly into an incredibly simple package. It’s so straightforward, you’re left wondering why we’ve been without this tool for so long.

The first thing you notice is the ball joint system. It’s made of tough plastic, which doesn’t creak or groan as you move the filter but has plenty of rigidity. It gives you confidence that you can place your filter in exactly the right place and it will stay there.

The filter and boom attach to a mic stand via a quick-release butterfly clamp. This might sound simple, but there’s a lot they had to get right here. Firstly, the clamp is stiff and strong, not slipping on any diameter of mic stand that I tried it with. I’ve used clips like this before that are typically designed to only work for one size of pole, but this one seems to grip onto anything. While the clamp is reassuringly strong, it isn’t difficult to use either, offering plenty of leverage with one hand. The rubber insert adds friction to aid with the grip, but also doesn’t leave any marks behind on the stand.

Now for the first of two party tricks. The filter is removable via a ‘twist and click’ mechanism, much like a bayonet light bulb fixing. This gives way to the whole unit fitting neatly in your bag for travelling. It also means that the filters can be changed in only a few seconds. Currently Pop Audio offers three types of filter: foam, fabric and metal. This is a great selection and I can’t see a need for anything else. Maybe a transparent material would be useful for filming scenarios?

The second trick comes in the form of two European-style mic stand screw thread at the top of the ball joint arm. This allows you to screw the filters directly onto a mic stand if there isn’t anything to clamp on to.

What’s more exciting though is the ability to use the clamp and neck as an extra mic stand. It’s not intended to take the weight of your largest condenser mic, but I don’t think anyone would dream of placing large expensive mics on anything other than dedicated stands. However it is really useful for holding two snare mics with one stand, reducing the amount of stands on the floor, for example.

Setting up the Pop Audio pop filter is quick and easy. It’s so simple in fact, that once in place you forget about it and concentrate on the other aspects of recording. I tried it in several studios where it was easy to place each time and it held the position without any trouble.

Sound-wise there are three options, but to be honest they’re all very transparent. With the studio edition, I had all three of the different filter types to test. The fabric filter is recommended as the go-to option with it being similar to most pop filter designs. I believe that it’s better than most at actually preventing plosives affecting the mic. On the odd occasion, like when working with some rappers, I’ve had to experiment with two pop filters in front of a mic. I don’t see this ever being necessary with this filter.

The metal filter, comprised of two thin metal discs punched with tiny holes is surprisingly transparent. I was expecting this to affect the sound more than the others. The best part about the metal filter is it’s easy to clean and can withstand life on the road.

At the other end of the scale there is the foam filter, which is designed to be the most transparent. While it is the one to use for those detail-critical recordings, it is less robust and needs a little more care.

I honestly can’t find anything bad to say about this product. There are plenty of areas where the product could have quickly failed, such as the neck’s ball joint system not being stiff enough, or the clamp not gripping mic stands of certain diameters. However, Pop Audio has designed something extremely practical out of quality parts that I’m confident will last.

Quite frankly I don’t think there is any other pop filter worth considering. This is the one you should buy. As for the pop filters you already own, next time they start to fail, replace them with one of these. There couldn’t be an easier answer – this is simplicity at it’s best.

Simon Allen is a freelance internationally recognised engineer/producer and pro audio professional with over a decade of experience. Working mostly in music, his reputation as a mix engineer continues to reach new heights.