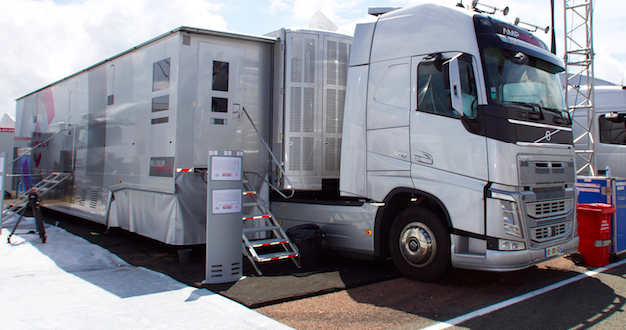 Audio faces the future with fresh generation of OB trucks

As broadcasters prepare for TV’s UHD future with a flurry of major new OB vehicle projects, many are also taking the opportunity to upgrade their audio capabilities – including provision for IP workflows and greater flexibility. David Davies takes a look at some of the major recent launches in this sector…

After several years of intense speculation about the format’s possibilities, 2016 appears to be the year in which broadcasters and their service providers take a decisive step towards making 4K production a workable reality. In particular, a number of major sports events – not least the UEFA EURO 2016 championships – have highlighted the ability of the format to deliver a formidable new level of viewer experience. And so while 4K production isn’t exactly near to being a default production choice – there were plenty of other events, such as Wimbledon, where it didn’t play a role at all – it is not surprising that many broadcasters are moving to equip themselves with trucks and facilities that are ‘ready’ to support the transition from HD.

The result has been something of a ‘convoy’ of new OB trucks hitting the road, including vehicles from – among many others – TV Globo (Brazil), AMP VISUAL TV (France) and DB Video (Belgium). But this Audio Media International overview begins with the first of four new trucks from NEP Visions which mark not only a step-change in its OB capabilities – but also underline a renaissance after a devastating chapter in the company’s recent history.

The news that NEP UK had lost five of its OB trucks in a fire last November was the stuff of nightmares for the leading broadcast services provider. The plentiful assistance supplied by other leading players in the broadcast community was heartening, as has been NEP UK’s resurgence in 2016 with the planned introduction of multiple new UHD OB trucks. The first vehicle, Pacific, made its major event debut at Wimbledon (albeit used for HD production only), with a further three – Aurora, Caspian and Sargasso – due to roll-out before the end of October.

Similarly equipped, with audio kit supplied by HHB Communications, the four trucks will have the ability to work standalone or together in any combination. The vehicles will be able to interconnect with each other via a CWDM fibre system, and the configuration allows for 200 shared 3GB signals to be sent between the trucks. Alongside Imagine IP3 routers, SAM Kahuna switchers, Sony HDC-4300 4K cameras, Canon UHD lenses and EVS servers, the trucks also feature notably high-end audio installations.

Luke Westbury, client manager at NEP Visions, tells Audio Media International that – as with the other components of the trucks’ design – the focus was on “high quality and flexibility, as these vehicles are going to be used for a wide variety of productions. Ease of use and familiarity were also important as personnel are going to be moving between the new trucks.”

Perhaps most significantly, the trucks will utilise the Audinate Dante media networking capability of the 56-fader Calrec Apollo consoles that will be a feature across the fleet. Specifically, NEP is using Dante to provide the interface between the comms infrastructure and the Calrec desks.

“Many of our customers are using different AoIP formats and it’s important that as a manufacturing partner we are able to help them leverage this technology, whatever the format,” says Calrec international sales manager Jim Green. “It’s vital that broadcasters and facility providers such as NEP Visions can be confident that they’ll benefit from Calrec’s knowledge and support as they move into an AoIP future.”

Underlining the extent to which the Bracknell-based company was conscious of being able to deal with all audio environments with its new trucks, NEP UK deputy head of sound Neville Hooper remarked that “we carried out some listening tests at HHB and settled on the 8351A SAM studio monitors. We felt they stood out head and shoulders above the Genelec 1030A studio monitors that we’d used before. Their manageable DSP means that we can deal with what can sometimes be a challenging acoustic environment using the GLM 2.0 software.”

The future is ‘converged’

Taking account of the changing nature of workflows, Fairlight’s converged consoles combine live and post production capabilities in a single desk with extensive communications and mix minus capabilities. The Live Line-Up range includes the QUANTUM.Live (pictured), a 12- or 24-fader table top console which is geared towards OB trucks and location productions.

Features include high processing capacity, with the ability to mix 250 channels for live productions and deliver up to 1,000 tracks when switched to post-production mode. It incorporates multi-level redundancy for continuous uptime and is supported by the modular MSX I/O range. The modules are powered by FPGA technology so deliver low latency and a high channel count, and ‘push the boundaries’ with regards to support for the most current standards and audio formats. The QUANTUM.Live (pictured, below) has a solid focus on IP and automation-based control and audio in a cost-effective package.

“Flexibility is key,” says Tino Fibaek, CTO, Fairlight. “This takes multiple forms, e.g. during a live event you can manage your remote I/O to properly capture all the action as it unfolds and then afterwards switch the OB truck from live to post applications. One investment with multiple applications.”

As featured on the DTS stand at this year’s NAB, Fairlight has also added support for advanced live production workflows for object-based audio (OBA). This includes streaming three-dimensional MDA-based OBA live mixes over SDI and other advanced production tools such as SALSA (developed by the University of Salford, integrated by Fairlight), which automates real-time mixing and VR-style augmentation of on-pitch sounds.

The specification of a 56-fader Apollo console, a 24-fader Artemis Light desk and a 16-fader Artemis sidecar that can be used to extend the other two allows the audio equipment to be used in a variety of configurations – both in and out of the truck. For instance, the Artemis Light can be removed and used in another location, such as a flight control room, and the Apollo can be extended by the sidecar to provide 72 faders. MS12 can operate fully equipped when needed and support two productions at once, or it can run at 50% for the smaller commitments.

Speaking ahead of the truck’s debut at the 24 Hours of Le Mans race in June, Emmanuel Le Marquand, audio operating manager of AMP VISUAL TV, remarked: “With MS12, we had a unique opportunity to build the most versatile truck on the market. We wanted to be able to maximise the equipment for any size of international production. The flexibility and modularity of the Calrec desks made them a perfect fit for this vision. The consoles offer full redundancy to give us peace of mind for major events, and their plug-and-play operation simplifies productions and gives us even more versatility,”

‘Plenty of demand for hybrid I/O’

“In terms of new OB projects, we see a great deal of interest in single-box solutions that offer multiple I/O options,” says TSL Products audio product manager Matthew Colman. “So you see a lot of people seeking products that can cater for the new AoIP workflows – involving Dante or Ravenna, for example – while also offering backwards compatibility for MADI or analogue.

“In fact, in some quarters MADI has actually had a bit of a resurgence, despite the fact that it is now 25 years old! For a lot of applications, 64 channels can be quite sufficient.

“But in terms of preparing for the future, it is clear that hybrid I/O is the way to go for many users. There is definitely more and more comfort within the industry about IP workflows, and we have seen this with the high levels of enquiries about our PAM-IP range. This series of video-over-IP (S2022-6) audio monitors makes it possible to monitor uncompressed video and AoIP, without superfluous format conversion hardware – thereby smoothing the transition to an all-IP workflow. We are also seeing strong interest in the redesigned MPA (Monitor Plus Audio) family, which offers solutions for established I/O as well as facilitating the move to AoIP workflows with support for Dante and Ravenna.

“Apart from I/O issues, I think it is clear that a lot of people are beginning to think about immersive audio and the fact that it will go hand-in-hand with UHD. That is going to lead to a lot of exciting OB projects, I believe…”

While projects discussed to this point have centred upon large trucks, there is also plenty of innovation taking place around smaller facilities. For example, Belgium’s DB Video recently engaged the services of Riedel Communications and coach builder Moeyersons to develop a ‘small yet robust’ expandable truck, Unit 10 (pictured, above), measuring just 11.65 meters long by 2.293 meters wide when closed.

One of the objectives was to support all sizes and shapes of production in a project that emphasised long-term future-proofing.

Dimitri Beyaert, CEO and founder of DB Video, observed: “While standing at the intersection of ‘classic’ OB-van building and the introduction of IP-based broadcasting, we had to make critical and challenging decisions about how to invest in and deploy new technology. We thought about the future of the mobile TV facility and determined that Riedel’s expertise and equipment could help us make this vision a reality.”

Incorporating Riedel’s MediorNet real-time media network, Unit 10 sports a fully redundant configuration built on a 10Gbit/s fibre network, 18 MicroN 80G media distribution network devices, two MetroN core routers, and four MediorNet external stageboxes. The result is a decentralised matrix that allows the OB van to become a cloud truck, with router elements located in what is described as the ‘ideal’ physical location for any given production or workflow.

DB Video expanded the matrix through the interconnection of a router and Riedel Artist digital matrix intercom system. All MicroN units installed in the van feature a MADI connection, and all I/O in the cloud includes embedding and de-embedding options, SMPTE2022-6 support, video format conversion and timecode insertion.

Not surprisingly, the imminent events in Rio may serve as a showcase for a number of major new OB trucks. New to the Brazilian market is TV Globo’s 4K OB truck, with a communications infrastructure based entirely on Clear-Com Eclipse HX-Omega digital matrix network technology. Among other Clear-Com equipment, TV Globo will use six Eclipse frames at its main HQ and two at the IBC that will be interconnected via IVC-32-HX boards using IP technology, and deploy MADI and fibre as a redundant interconnection.

Speaking more generally about the current demand from the OB community, Clear-Com president Bob Boster says: “A great deal of activity for entire systems – where we are doing the comms infrastructure for the whole truck – is taking place in Europe and the Americas. But the most active area is probably Asia, where we are doing a lot of [partial comms supply projects].” The FreeSpeak II wireless intercom remains its most popular solution in this market, although Boster reports an increasing comfort in terms of the selection of “IP overall both in terms of backhaul from the truck to studios, as well as IP as an architecture to link trucks together on-site or into the venue.”

Although the ability of this new generation of OB trucks to support 4K production and delivery will inevitably dominate the industry headlines this year, the story of their audio advances should not be underplayed. Just as many of these trucks will allow users to switch seamlessly between HD and 4K, a great number will also support the ability to deliver audio anywhere, anytime as the IP revolution gathers pace.