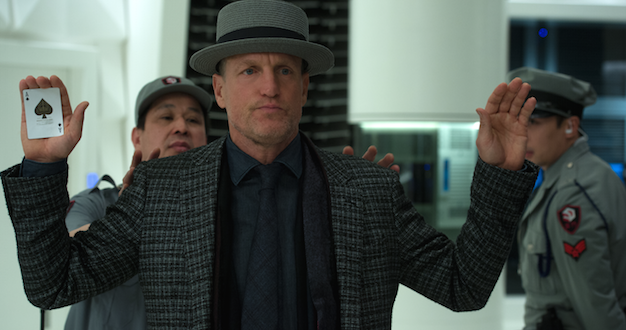 Filming in exotic locations can throw up challenges for the whole crew when shooting a movie, but sometimes you feel the sound department has it harder than most. Whereas a scene shot in a faraway land can lead to excellent visual results, capturing dialogue can be difficult at the best of times, especially when you throw a medley of camera tricks and unusual shot choices into the mix.

Production sound mixer John Casali found himself in this situation when on set for the effects-laden globetrotting caper thriller Now You See Me 2, which sees street magician quartet the ‘Four Horsemen’ return for another stage illusion adventure centred around a plot to expose the unethical practices of a tech magnate.

BAFTA nominated for carrying out the same role on Tinker Tailor Soldier Spy, Casali has plenty of experience gathering high-quality dialogue from an all-star cast, but usually in more forgiving environments for the job.

“The locations were busy, noisy and logistically challenging, in particular filming ‘walk and talk’ night scenes on the bustling streets of downtown Macau,” Casali reports. “Many of the shots were filmed on Steadicam, and covered multiple blocks of streets.

“Finding a convenient place to hide me and my sound trolley, while running out radio receivers and their antennas as a mobile satellite and booming in extremely narrow crowded alleys with low washing lines and telegraph wires all added to the usual sound challenges, and made for some logistical difficulties.”

As if these physical obstacles weren’t enough, when recording in highly populated urban centres, unwanted sounds off-camera are going to be a pretty unavoidable threat. Fortunately, Casali came prepared.

“Many of the locations were public spaces, and subsequently we had little or no control over background noise. In these circumstances the [Schoeps] SuperCMIT really helps reduce unwanted background noise,” he explains. ‘In other locations, however, the best you can hope for is some degree of audio isolation, take all the dialogue on radios, and make peace with the background noise, particularly when it’s featured on camera.

“We recorded lots of crowd scenes. To augment a stereo pair of [Sennheiser] MKH50’s I used my [TSL] Soundfield ST350 [portable digital surround sound mic system] to record in 5.1. We often placed booms away from the action to achieve clean crowd effects.

So what else does Casali have up his sleeve in terms of kit?

“I record to a Cantar, via an analogue Cooper CS208 mixer. I use Wisycom radio mics and a plethora of shotgun mics, both analogue and digital,” he reveals. “The gun mics I use most regularly are the MKH50, Schoeps CMIT 5U and the SuperCMIT.”

He may have had control over what equipment he could bring with him, but as with all of these projects, he didn’t have much of a say over whom he worked with, other than the other members of his four-man crew. Luckily, with actors such as Jesse Eisenberg, Woody Harrelson, Mark Ruffalo, Morgan Freeman, Sir Michael Caine and Daniel Radcliffe all involved, he didn’t need to worry about inexperienced talent, and the costume team was very co-operative too when possible problems were identified.

“The cast was great; they genuinely seemed to be enjoying themselves on set. Lots of banter,” recalls Casali. “It was a large ensemble cast, with an established rapport, and consequently I suspected there would be a lot of ad-libbing from the artists. It was essential that we made the costumes work for us, from a radio mic fitting perspective. Preparation was key. We worked closely with the costume department prior to, and throughout shooting to iron out any potential issues.”

A solution was also required for the scenes where one key cast member can be seen acting out the role of his main character, Merritt McKinney, and twin brother Chase. “Another unusual aspect to the film was Woody Harrelson playing two independent characters, often interacting with one another on screen,” Casali explains. “We recorded Woody’s on-screen dialogue, then via Pro Tools we fed him his pre-recorded dialogue, with a discreet ear piece and continued shooting the scene, with Woody playing the other character.”

Finally, back to the topic of teamwork, how much does Casali value the relationship between production and post on a film like this? How important is this part of the process?

“I like to keep the dialogue editor and picture editor up to date as the film progresses, keeping an open dialogue with them throughout, flagging any concerns, making sure there are no audio issues, and making sure they’re aware of any wild tracks, 5.1 recordings and sweeps I’ve recorded. After filming, I keep in touch and receive updates throughout the post production phase.”

With all things considered then, it appears that the characters on screen weren’t the only ones having to work some magic to make this particular film come together.