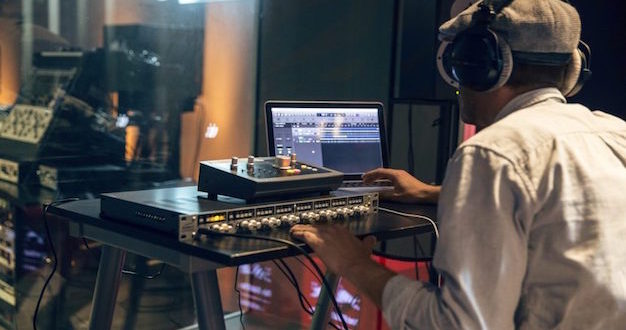 The manager of Red Bull Studios Amsterdam, Jasper Cremers, has purchased an iD22 audio interface and an ASP880 8-channel mic preamp from Audient.

The mic pres on the two units are exactly the same as those on the resident analogue mixing console that Cremers has been using for the last year at his ‘day job’ – an Audient ASP8024.

When asked how he has been using the units, Cremers, who juggles being studio manager at Red Bull Studios Amsterdam with his work as a music producer, said: “I use them in every situation, actually. That’s what I like about them, they’re really flexible. Whenever they’re needed in the Red Bull Studios they act as our ‘B’ set up without compromising our quality standards.”

Cremer’s private studio is pretty high spec, too. With Dynaudio BM6A MkI monitors “which I absolutely adore”, the iD22 and ASP880 have made nice additions, hooked up to some Warm Audios, an Avalon preamp and SSL EQs.

”The thing is, I’m not really an engineer. I just want to record as soon as possible when I have an idea, and don’t want to worry about the sound later. That is what these babies enable me to do,” Cremer explained. “Me and my musical partner go by the name of Nelson & Djosa (pictured below from left) and made several albums for artists such as Giovanca, Esther von Haze Ntjam Rosie, Karsu and recently released an album for jazz flute player Ronald Snijders, which we also made a documentary about.”

Cremers said that the units are a real step up from his previous converters – sound and workflow wise – citing the iD22 as “simple and user-friendly, yet flexible enough to facilitate more complex sessions.”

As for the ASP880, “The impedance switch – that’s some clever engineering! I’ve never seen that on other units, and it’s definitely a way to make these units interesting for pro users,” he noted.

It sounds like they’ll be staying with him for a while longer then. “Now that we’ve finally released the documentary and album for Ronald Snijders, we have some time to finish our Night Cry project, with Dave ’Smoota’ Smith as the lead singer,” he concluded.

(Main picture: Producer Jonathan Simpson with the iD22 and ASP880)