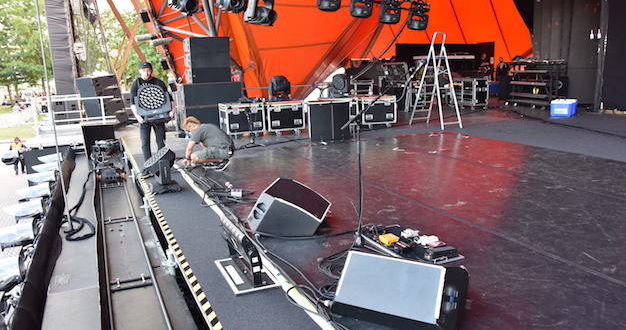 For bassist Flea and drummer Chad Smith, the X4 drives SuperWedges containing a pair of 12in speakers, a 10in speaker, and a 2in speaker. “Utilising input 1 on the X4 sends signal to all four speakers, while using Armonía to separate frequencies between 40Hz and 80Hz into one 12in, 40Hz and 250Hz into the other, and 250Hz to 20kHz in to the 10in and 2in speakers,” explained Dave Rat. “This results in a four-way wedge that reduces comb filtering interference in the 80 to 250 region that occurs when both 12’s reproduce this frequencies.

“Input 2 on the X4 allows the SuperWedge to function as a conventional tri-amp wedge using one 12in speaker plus the 10in and 2in speakers; input 3 outputs to only the 40Hz to 80Hz 12in, enabling direct control of sub frequencies exclusively,” Rat continued. “Each X4 was able to drive a pair of SuperWedges with plenty of headroom thanks to its 3000 watts of power per channel at four ohms.”

Guitarist Josh Klinghoffer’s SuperWedges each have one of their 12in speakers replaced with a 12in Celestion guitar speaker. With the X4’s routing, these deliver a standard triamp wedge configuration on input 1, and use input 2 to deliver full-range output to the guitar speaker only. Using an emulated output on the guitar rig, this allows Klinghoffer to hear a guitar sound from the SuperWedge that is extremely close in tone to the sound of his guitar rig. As Klinghoffer’s monitor wedges, operating in stereo, they are driven by one X4 each.

As well as the Rat Sound SuperWedges, Powersoft’s X4 amplifiers were used to drive the rest of the monitoring system, including EAW MicroWedge 12s, dual drum thumpers, a drum sub, two Rat Sound L-wedges, and side fills.

Due to their small 1RU footprint, the ten X4’s that comprised the final system were easily fit in two custom-panelled racks designed by Jon Monson, head of touring at Rat Sound, which fit directly under Vanderwall’s console.

“Powersoft’s X series amplifiers and our Rat Sound SuperWedges complement each other perfectly,” Rat concluded. “The systems have been running exactly as planned and we even included a backup X4 in each rack pre-loaded with all of the necessary configurations to replace any other X4 in the rack for added redundancy. The multiple configurations, clarity and volume levels we are able to achieve with the X4 powering the SuperWedges is breathtaking.” 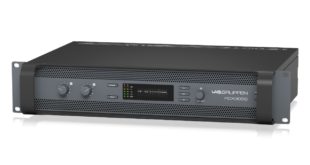