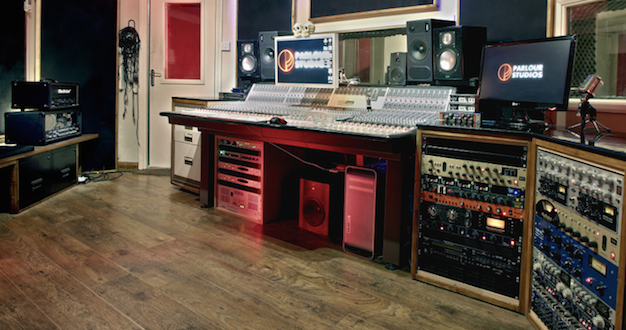 Our latest Studio Spotlight, in association with AllStudios, takes us to The Parlour Studios in Kettering, Northamptonshire – a spacious facility with 420 sqft live room offering recording services, online mixing, mastering and rehearsals to a wide range of clients.

Previously known as Puretones, the studios were originally established back in 2000, in a tiny space close to the town, with very limited equipment. However, they quickly found favour with a number of bands, prompting studio owner/producer/engineer Neil Haynes to start looking for bigger premises. AllStudios caught up with Haynes and asked him to tell us more about the studios and how he came to set up at their current Glendon Lodge Farm location.

"In 2003, after months of searching for the right space, I was driving past this old farm in Kettering and decided to knock on the door to see if they had any buildings we could use. It turned out the owner was a lovely man who was really into music and he kindly agreed to let us convert the old milking parlour into studios, which is how The Parlour was born,” says Haynes. "That was 13 years ago, and a lot has changed since then. Russ Russell, a local producer who was spending a lot of time travelling to various studios around the country, and even abroad, decided to look for somewhere closer to home where he could work. He came to The Parlour to do some quick demos and liked the vibe so much he ended up installing some of his gear there.

"Russ explained The Parlour was a really cool place to work, and once I’d brought my gear in and upgraded a few things it gradually became my ‘go-to’ studio. Then a few years later Neil and I decided to make it official and went into partnership, continuing to improve the facility and the gear until it became what it is now, a real heavy-weight pro studio but at an affordable price, able to deliver world class records without artists having to break the bank.”

The studio as it is now was originally designed by Haynes with help from online forums, but over the years he and Russell have made a lot of modifications. “We have a decent sized control room and a pretty large live room able to accommodate large groups of musicians so we’ve spent a lot of time tuning the acoustics in both rooms; we added a stone wall, a mirror wall and built a store room onto the side of the live room that acts as a reverb chamber enabling a “big room” drum sound," Haynes continues.

“The acoustics in the live room are world-class and this makes a huge difference to the quality of the recorded sound. In the lively end of the room, drums sound huge and vibrant whilst the dead end provides a more intimate sound. We also have some moveable gobos to tailor the acoustics for the required effect. The room is completely isolated from the control room, isolation booth and the outside world. It also features a fully floating wood floor, fresh air replacement and excellent sight lines to the control room and isolation booth.

“We’ve also totally refurbished and rewired the control room. We bought an Audient ASP8024 72-channel console, a new Pro Tools HD3 rig, and then we added more toys to the already impressive racks of analogue outboard. We are on an eternal quest for good monitoring and we have changed monitors many times, recently settling on PMCs, Unity and NHT monitors. (Full equipment list here).

“Last but not least, we added a lounge/living space to give artists somewhere to chill as well as give people the option of staying over if they’re working late or live too far away. We don’t have the biggest premises by any means but all this helps us keep the costs down so we can be affordable to more acts. The combination of great rooms and equipment enables us to compete with even the biggest of studios.”

We have basic accommodation that can sleep up to five people. There is a shower, TV, stereo, pool table, internet and a small kitchen. It’s certainly not The Ritz but people do seem to like it here. We’re also ideally located in the most central point of the country with great road and rail access and several nearby airports. Kettering is a fairly quiet town but you can find pretty much anything you need here: shops, bars, hotels, restaurants, fast food outlets, cinema, bowling etc. all within a short distance of the studio, some within walking distance. And, because we’re just outside of town on the farm, it’s very peaceful. There are some great walks and cycle tracks around the immediate area, but if anyone wants a bit more action London is only an hour away on the train.

Who have you had through the doors since you opened? And what makes them keep coming back?

Both of us bring in artists from all over the world so the place is constantly buzzing. Napalm Death are regulars at the studio and Russ has worked with them for 15 years now, including their last two albums and many of their spin off projects including Venomous Concept, Lockup, Absolute Power and Menace. Dimmu Borgir from Norway have used the studio for their last two DVD mixes. Raging Speedhorn just completed their new album here. Samael from Switzerland, Darkrise also from Switzerland, Berzerker from Australia, Oceans of Slumber from Texas, The Soap Girls from South Africa, Brujeria from Mexico, Leng Tche from Belgium, Outrage from Japan, Dutch Schultz from Ireland, Rot Violent from Colombia, Claustrofobia from Brazil, the list is endless.

How are you managing to survive in the current climate where budgets are constantly shrinking? What plans do you have for the future?

We seem to have got it just right really. Great facilities but without over-expansion. We can keep the costs affordable and the end product always makes the clients happy, most of them come back to see us again regularly. We have Parlour Rehearsals just around the corner on the same farm, which is always busy. But as far as diversification goes we don’t really have the time or need at the moment. We’ll continue to add more equipment and push the studio onwards and upwards. There are always things that can be improved upon, but the plan is to just keep on making great records.”