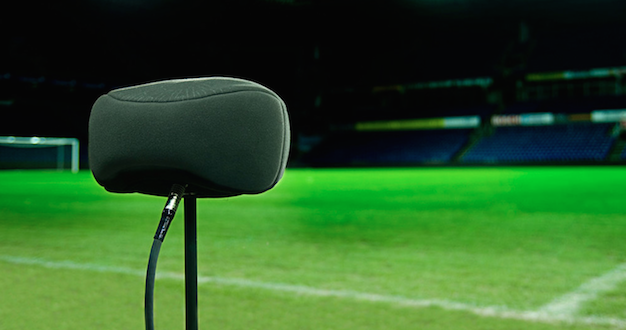 Using Microphones for Outside Broadcasts

Robert Edwards, co-owner of Video Sound Services (VSS) and two-time BAFTA winner, offers some practical tips on deploying microphones in sports stadiums and other outside environments.

Sport is the mainstay of the paid-for channel offerings by most of the world broadcasters. It is big business; Deloitte estimated that the value of top-tier sporting events was in excess of $28 billion. All of these events need world-class audio. The majority of it takes place outside, so the tools for the audio job must be selected carefully.

Using any form of microphone outside the confines of a comfortable and warm studio environment is inevitably going to present a challenge. The elements conspire together to present a formidable list of obstacles to overcome.

Wind, as in life, is the single biggest problem facing a microphone when let loose on an outside broadcast, but moisture comes a close second.

Before you do anything else you should go for the quaintly named “reconnoitre” or recce. Nothing beats a good look at the outside space you are hoping to cover before you start to rig. Take some shots on your mobile to remind you where you are planning to put your resources.

There are usually covered areas for spectators. Plan to use them for your overall ambiance coverage where your principle microphone source may be kept relatively dry. Check that your main ambiance position is not near a source of unwanted noise, like a ventilation duct or PA speaker. Take a look at how you are going to cover any action in the uncovered and exposed zone. How will you run cables there? How many microphones will you need? Will the cable runs be excessive for the type of microphones you are planning to use? Would radio microphones be useful? If so, where will you put the receivers? How will they be powered?

To reduce the unwanted elements, the microphone should be mounted so that it is isolated from any mechanical noise and wind, but that is tricky. Rycote is acknowledged to be the go-to provider of windshields and mounts and has developed ingenious methods of de-coupling the microphone from the unwanted dark side. Meshes, gauzes and foams are employed within a stronger overall frame. The company is also good at absorbing the direct impact of a very costly Premier League football player without injury to either. Low-base stands are less obtrusive, less dangerous and less prone to being blown over. Without exception, on the mixer, the low-pass filter is your friend in dealing with wind rumble. No-one is ever sacked for taking too much out below 100Hz.

The overall ambiance gives the event a sound signature. The microphone should generally be placed to get the best overall crowd sound, without being so close as to hear individual voices. That usually means high up but that brings its own problem of long cable runs.

There are a number of microphone contenders for the Swiss-army knife of ambiance. The SoundField mic continues to lead the pack in its ability to capture 5.1 that can be seamlessly folded-down to stereo and mono. It is remarkably easy to rig and will work at large distances from both the controller unit and an OB truck. Its killer feature is the 20W heater built into the body of the mic to keep the capsules warm and dry. DPA introduced the 5100 (pictured) in 2009 using miniature omnidirectional capsules in small interference tubes mounted in what looks like a bicycle saddle and requires no outboard processing. Audio-Technica has the BP4029 stereo shotgun, which is useful if you only want stereo.

A modest lift at 8kHz in the mixer will counteract some of the losses associated with distant placement.

On the sport-action coverage, a straw poll in the UK found that the single most used OB microphone was the Sennheiser 416 (and its newer 8060 derivatives). It has a couple of unique features. It has increased directivity due to the interference tube ahead of the transducer and this is coupled to a unique RF modulating system. This is a low-impedance system and inherently more robust to the effects of moisture and humidity. Cheaper rivals exist from Rode with the NTG-2 or Audio-Technica 897. For expensive rivals, try the Schoeps CMT5U.

There are advocates of fruit-bowl technology in the shape of Telinga dishes, based on the parabolic dish. This was the go-to method for picking up cricket-bat effects in the ‘60s and ‘70s. A costly human needs to pan it with the action and it can’t be mounted on a Steadi-cam.

Finally, don’t ignore the cable to the mic. Protect any junction boxes to multi-ways with waterproof covers or even bin-bags. Star-quad is always preferred and a covering rubber mat will get brownie points with the health and safety inspector.

Robert Edwards has been involved in broadcast audio for over 40 years, and is co-owner of VSS Limited with Ian Rosam. He’s twice been a BAFTA winner, and continues to work on live major network programmes, both in the studio and on outside broadcasts worldwide. Britain’s Got Talent, X Factor, Celebrity Juice and Michael McIntyre’s Big Night Out all sit alongside long relationships with Sky, HBS and OBS.