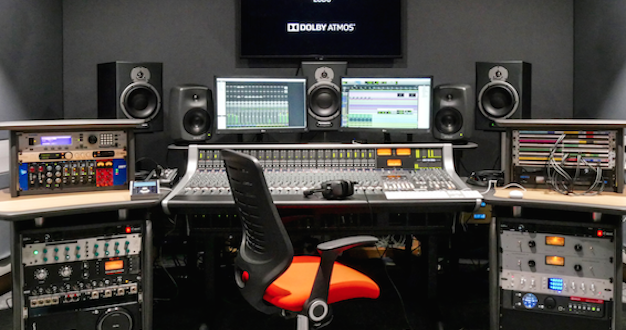 Another multi-million pound installation at a London university is further proof of the education sector’s desire to offer professional-standard facilities for the next generation. Adam Savage went over to London South Bank University to check out their new media complex.

The staggering rise in investment that some educational establishments both here in the UK and further afield have made recently when it comes to audio equipment for new facility builds hasn’t gone unnoticed here at Audio Media International.

We knew there was a lot of big spending going on, but our trip to the University of Westminster last year really opened our eyes, and it was only a matter of time before a similar story caught our attention again.

Now home to its lucky School of Arts and Creative Industries students, the new £4 million Elephant Studios at LSBU (London South Bank University) took around two years to turn from vision to reality, and was opened in February by former BBC chair Lord Michael Grade.

Consisting of a large sound stage, nine editing suites, cinema and more, arguably the highlight of the new media complex is the main sound studio control room, featuring an SSL AWS 924 delta console and an array of Dynaudio AIR speakers positioned for both 9.1.4 and 13.1 Dolby Atmos surround setups.

Designed to give students everything they need to prepare for a career not just in music recording/production but post as well, it is the first Atmos/SSL-equipped recording studio in a UK university, according to Langdale Technical Consulting, the firm responsible for the technical installation.

All advance offsite work for the studio was built in a joint venture between Langdale and VDC Trading which saw the entire design and build of the audio infrastructure completed while the builders were still on site completing the facilities.

As project consultant Bill Ward of Langdale observed, “The advantages of Mosses + Mitchell modular patch-bays combined with the bespoke wiring facilities at VDC meant we were effectively able to finish the installation before we’d got access to the rooms. All the audio looms were prepared using Van Damme blue series and Neutrik connectors throughout and by the time we got on site we were effectively installing and testing and giant studio-wide audio loom. It’s an approach we’ve taken before and one that works successfully in saving the client down time towards the end of a project.”

Justin Randell is the director of Elephant Studios at LSBU and also course director of the Sound Design degree. With the difficult aim of ensuring a professional standard throughout, Randell found the best way to achieve this was to visit some local post houses, especially with one of the world’s leading hubs for this very thing right on his doorstep. Two well-known firms, Factory and 750mph, were happy to help when Randell sought their advice alongside Ward.

“The post sector in London is where it’s at and a lot of people are looking at that area. Even people from the States are coming here so [we thought] why don’t we just go and visit these places? One of the advantages, with my education hat on, is that I’m not a competitor or a rival trying to pinch ideas,” Randell reveals.

“[We went about] identifying the workflow and directions of what is happening in post and in some ways there are differences to what we want to do in the education sector. In post there is more of a shift towards digital but we wanted to teach signal flow from the ground up, so from analogue into digital. We think it’s really important for students to have that tactile experience… of how sound goes from one place to the other.

“The digital tools are amazing and make things so much simpler but from an education point of view they don’t teach the underlying principles very well so they’re taken for granted.”

“That room in Factory was built by a friend of mine and I really liked the workflow and the fact that it was quite simple, but had a few choice bits of analogue stuff and the SSL [AWS 948] sat in there. As a room it’s a really easy one to work with so we modelled it on that to start off with.”

As well as going with an AWS 924 instead of 948, Randell’s “choice bits of analogue” include an API Lunchbox kitted out with two Neve 1073 preamps, four API mic pres and two Chandler Little Devil compressors.

“You’ve got the clean sound of the SSL and then over there you’ve got more boutique-flavoured sounds,” Randell explains.

Of course, integrating a Dolby Atmos setup is not easy, especially in an educational environment, but fortunately Randell was in regular contact with the right people to ensure everything went smoothly.

“At the same time [as working on the project] I was also working with various Dolby Atmos projects in cinema,” continues Randell. “So I had a conversation with Dolby about what we could do at a university level to teach Atmos and integrate it with the SSL workflow.

“Because the SSL goes all the way up to 5.1 we can use it to teach standard surround. When we switch to 7.1, 9.1, and then to Atmos we then switch to a matrix and the SSL becomes the session controller.”

The recent developments at LSBU and Westminster are evidence of UK universities’ newfound ambition to take industry relevance to a whole new level, and we’re confident there’s much more to come.