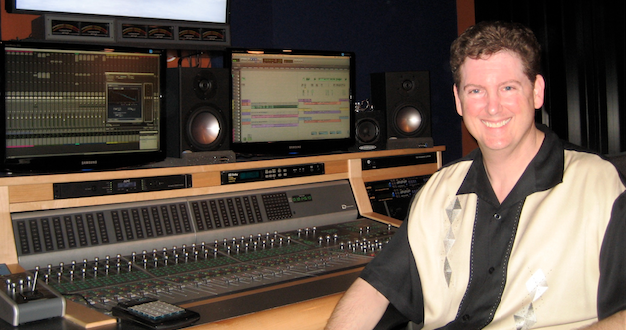 Being faced with audio recorded on a boat in a storm with no proper sound crew is not everyone’s idea of good fun – that’s unless you’re Bob Bronow. Adam Savage chats to the re-recording mixer, who has rightfully received recognition for his work on extreme reality TV shows and other projects in recent times.

You’ve done a lot of TV shows over the years but you’re best known for Deadliest Catch. Surely it must be difficult to achieve good sound on a series like that?

Without question it is the most challenging of any show that I’ve worked on. There are no production mixers and everything we get is either from a camera mic or lav [mic]. If I was a camera guy on one of these boats I would be so concerned about not dying that would probably be my last concern! I have nothing but respect for these guys and I’m just amazed that I get any audio because I certainly wouldn’t be able to do it.

There used to be guys [fishermen] who wouldn’t even wear lav mics – they would just throw them off – and a lot of times they’re underneath layers of rain gear which certainly make it more difficult. When we’re lucky we get someone right on mic and on Season Four or Five I had them put Sennheiser 416s on the cameras so I knew that at least if I was going to be pointing it at somebody, the chances were we were going to get something that was useable. They were a little reluctant at first because at the time pretty much all the equipment that went out there did not come back.

It’s on Season 12 now. Has the equipment improved much since the early days?

The equipment has certainly gotten better. Because of the unusual shooting locations and just the way it worked, we were tape-based for quite a long time as it was the most efficient workflow to get the work done, but now everything has gone file-based, which makes some stuff really easy – namely they don’t have to ingest all this stuff in real time.

The audio equipment has changed, but the equipment on the boat hasn’t. There are still hydraulics, cranes, huge diesel engines, waves and wind, and that doesn’t change ever. I spend about a third of my time doing nothing but noise reduction. Everything is evaluated and processed so that it’s the best it can be before we even start mixing.

We hear that iZotope RX is your preferred way of doing this?

In the very early days [of RX] they found out I was using it and were very surprised it was being used in post-production. I was basically telling all my colleagues in post ‘oh my god you’ve got to try this, it’s amazing’ and you could see when RX 2 came out that it was really aimed towards the post community and that’s when things really took off.

You seem to specialise in shows about people in potentially hazardous situations. How do the others compare to Catch?

They’re similar but not really the same. Some of the best audio I’ve received was from Ax Men! Yes, there are usually a lot of chainsaws in the background, but they have sound crews out there and when you’re way out in the woods it’s pretty quiet, so when they’re [the logging crews] not working, getting an interview is great.

And then there’s the new fictional drama series The Family. That’s a bit of a change for you?

It’s actually very nice to get up on a stage and not think ‘how am I going to clean everything?’ This is my first foray into an area I’ve been wanting to get into for some time, and I was really very excited when I got the call that Technicolor wanted to partner me with Frank Morrone (Lost, The Strain) to mix alongside him. We’ve known each other for years but never had the opportunity to work together. It’s been amazing and I hope we get to do more.

Where do you spend most of your time working?

I do Catch out of Max Post in Burbank; other shows like The Family are through Technicolor and those stages can be on the lot and off the lot. I also have my own system at home.

As a member of the Television Academy Sound Peer Group executive committee and CAS Board of Directors you must get into some interesting discussions. What are the main talking points right now?

For me one of the biggest things is keeping the art and craft of sound relevant in people’s perceptions. We’re in a weird area where if we do really good work, nobody ever knows that we were there. The fact that some of these shows sound so good is only because of the really talented sound people. It does not come out of the camera sounding like that!

What went on with the Tonys [theatre awards], where sound was dropped from the categories, for me was a wake-up call because it was like ‘people don’t know what we’re doing here’ and it’s important that we’re not marginalised because we, like picture editors, colourists, visual effects people, all contribute a lot to these shows, only our stuff isn’t visible on the screen.

Education seems to be another big part of what you do…

It’s really important because we have some great talent coming through and they’re the ones that are going to push this industry to the next level. I’m not a digital native speaker, but these people have grown up knowing nothing but digital. One of the reasons I like going into universities and meeting these kids is for the most part encouragement and letting them know that it’s not possible to do this if it isn’t truly your passion.

It’s wonderful when someone comes up to you afterwards and you can see the fire in their eyes. A lot of the guys I used to see on the East Coast I’m now seeing working their way up in Hollywood and it’s awesome to see.