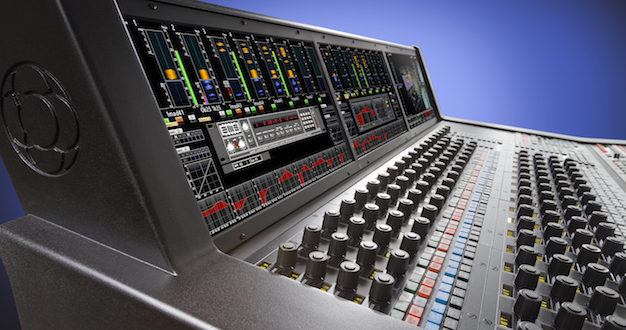 AMS Neve has revealed DFC3D – the latest addition to its DFC console series – at the Prolight + Sound tradeshow in Frankfurt this week (Hall 9.1, Booth F24).

Academy and BAFTA award-winning post-production house, Goldcrest Films – home to two DFC Gemini desks – has already chosen a large-format DFC3D digital film console for its new Dolby Atmos mixing theatre in the Soho-based studios, which opens in May. The console is a dual-engine 1000-path USP engine, with a 72-fader dual operator control surface with designed-in integration with the Avid S6 controller.

Goldcrest’s head of operations, Simon Ray, stated, “Big films want to mix on large format digital mixing consoles and it is great that AMS Neve are constantly updating and improving the DFC to meet the demands of the new sound formats including Dolby Atmos. The new IP based control means the surface can be modular and therefore configured to an individual mixers requirements”.

Active Faders is included in version 3.4, build 29+, and will be available from 7 April 2016 to install on all existing Genesys and Genesys Black consoles.

Using what the manufacturer describes as the highest quality analogue to digital conversion design with AES and FireWire interfaces, it allows for a ‘simple and elegant’ connection from the 1073DPX direct to a DAW computer or DAW I/O interface.

Single, double and quad rate sampling is available in addition to daisy-chaining of multiple units on a single FireWire bus. Multiple 1073DPX with digital I/O units can also be synchronised together and to other compatible digital units using multiple sync options.