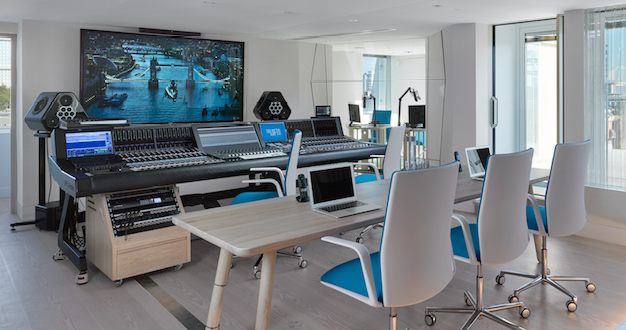 The new premier recording suite at Grand Central Recording Studios is not quite what you’d expect. Colby Ramsey paid GCRS a visit to find out about its ‘revolutionary’ speaker system and the overall vision for the facility going forward.

For any creative sound design and audio post facility in the heart of London’s Soho, competition is persistently white hot.

Grand Central Recording Studios is not just any studio, however. For over 20 years, its well-established roster of sound designers have been responsible for the production of a diverse range of commercials, leading brand campaigns and innovative Foley sound mixes spanning the entire length and width of the film and television industry, including the UK’s first ever commercial in Dolby Atmos – BMW ‘Wolf’.

Transforming a top floor apartment into two new state-of-the-art studios was always going to have its difficulties, but that is exactly what GCRS has done with The Lofts. For a start, during its construction, two inches had to be taken off the floor concrete due to the lack of headroom.

Upon entering The Lofts, it has an unmistakeable feel of a very non-traditional space in terms of its design. The amount of light in the room is maximised by perspex diffusers fitted to a wide panoramic window along the far wall, which opens out onto a rooftop terrace.

“There’s so much light and space up here, and there’s no other studios we’re aware of where you can walk outside onto your own private terrace,” says Ivor Taylor, Grand Central’s technical and finance director. “It makes it a nice relaxing environment to work in.”

Along with Taylor, The Lofts’ interior design and combined vision was that of Carole Humphrey, managing director of GCRS for over 25 years, who selected the furniture and modern, fresh colour scheme, and long-term partner Derek Samuel, who was responsible for all of the graphical and typography work in achieving the desired layout and overall feel of the studios.

Taylor explains that what they have learnt over time is that less is more; when planning a studio one tends to put in more than is needed but it is important to remember that these details can always be added in afterwards: “You have to be prepared to take input from other design disciplines but you also have to stand your own ground – it’s about trying to find that balance,” he says.

Finding that balance when creating the studio was not without its physical challenges, especially in terms of sightlines. With floor-to-ceiling glass on the voiceover booth, which Taylor explains was very tricky to get in place, the room feels even bigger and it enables those sitting behind the mixing desk and on sofas to see the whole body of the actor. The acoustic isolation in all of Grand Central’s studios was designed by David Bell of Whitemark, and The Lofts were no exception.

Being what Taylor describes as a ‘DFC house’ since 1996, it was the natural choice for Grand Central to equip studios Three and Four in The Lofts with AMS Neve DFC Gemini consoles. Yet making the decision of which console to install was not completely plain sailing, as Taylor explains: “Downstairs we’ve got four DFCs and two Avid Icons, so there was an argument as to whether we should upgrade the Icons to the S6 and put one up here, or stick with the DFCs, which the sound designers had very strong feelings about.”

But why DFC’s? Taylor explains that on a technical front, they felt like the consoles had the necessary weight with their clients: “You sit there and there’s no question you’re using one of the best products available.”

Sound designer Miles Kempton elaborates, and says that with the DFCs the volumes and controls are on a separate automated system, so to copy versions across when doing multi-track projects on a timeline becomes slightly more fiddly.

“The Icons serve their purpose for quick in-and-out jobs doing multiple versions, but you’re getting more bang for your buck in terms of compression and EQs with the DFC,” he explains.

Taylor considers the argument that what the DFC offers with regards to compression and equalisation and the overall setup, has been perfected to such a point over a period of time that it has a particular sound, and produces a quality of final mix that people simply prefer.

“The DFCs are like using a very refined set of tools – like you’ve got a very sharp knife that works in a very precise way”, he describes. “Somewhere in the midst of that is the reason why the engineers – and Carole and I – wanted DFCs up here in The Lofts, our premier studios for working in stereo.”

Assuming it’s in stereo, the DFCs are capable of taking any mix from any of Grand Central’s other studios. “You can’t play 5.1 or 7.1 up here at the moment, and that’s very much because of the kind of work we believe should be done up here,” adds Taylor.

Both studios are running Pro Tools 11, going on 12. The choice to make the switch from Audiophile to Pro Tools was made around Christmas 2010, although Taylor insists that this would not have been feasible much earlier in Grand Central’s life: “Back then Pro Tools wasn’t ready to do the kind of work we do, which is very full-on. It can be a very high-pressure situation when there’s a highly talented person sitting in there wanting their money’s worth.”

Neumann U87s and Sennheiser Shotguns and lapel mics are used throughout GC’s sound booths, not excluding that of The Lofts. The nearfield loudspeakers providing playback are Fostex 6301NDs, and Taylor explains that they try to keep this equipment the same throughout the facility, and for good reason.

“You’re always trying to go for consistency because every engineer needs to be able to work in every studio. It is one of our principle things,” he says.

This is very much a commercial decision due to the fact that clients often want to work with a particular sound designer, and if that sound designer is restricted to a certain studio, then the ability to provide that service to the client is greatly reduced. From a business perspective, it also means that Grand Central is not likely to end up with customised studios for particular sound designers. “We don’t worship technology, but if an engineer says I want a new plug-in for this, then we will go with it,” Taylor adds.

For monitoring, The Lofts are equipped with a pair of wide-dispersion custom Exigy nAxial speakers, which are arguably the centrepiece of the facility and are designed to produce minimal lobing, minimal variation in sound response, and much less of a sweet spot from the engineering area to the listening area.

The indisputable laws of physics mean that in normal speakers, acoustic lobing in the dispersion response and bumpy crossover frequencies – affecting the tonality and clarity of the sound – are in many cases unavoidable when the speakers are not in the same physical location. Taylor explains that the only way to improve this is to “get the transducers as close together as possible, time aligned as much as possible, and to make sure you’re sitting in the right place.

“You can be sitting anywhere in the room and they sound pretty balanced all the time – performing very much like a coaxial speaker,” he comments. “Here we record and listen to the human voice, and these speakers are very true to that.”

Kempton continues: “Most clients want to hear playback through TV or on mobile devices now because that’s what it’s eventually going to be reviewed on, but we always make sure we playback through the monitors to judge the mixes.”

Taylor goes on to say that GC’s main prerogative is serving its clients, who should be able to make a subconscious assumption about the technical side of the job: “What matters to us is that clients walk in, they sit down and are happy, and then walk away with work that they feel is creatively the best.”

In terms of the future, Grand Central has plans to make one of its existing studios Dolby Atmos-ready, based on the same concept as The Lofts’ Exigy speakers in order to achieve this minimal lobing in an Atmos environment.

“Here at GC we’ve got a lot of depth and there’s very few things that phase us – we now do a lot of ADR work downstairs, the planning levels required of which are very complex and we’ve had very good feedback on that,” Taylor concludes. “The most important asset we have is our staff and I think that our absolute belief in them is what sets us apart. With The Lofts, I think we’ve got a look and feel that is classic, and will last.”