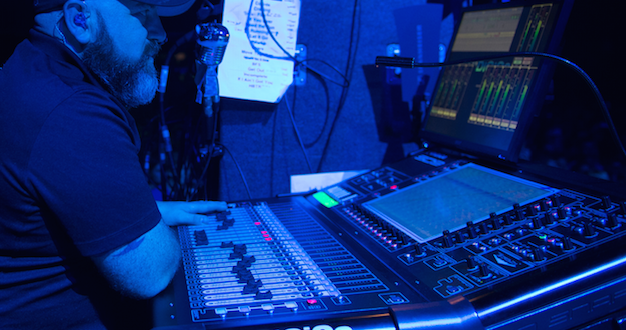 With the number of events continuing to rise, the essential health of the live touring market isn’t in any question. But, as David Davies discovers, reduced budgets and evermore-rapid turnarounds mean that the lot of the road-hardened engineer isn’t getting any easier…

As press releases containing details of this or that major tour or summer festival continue to hit the inbox, it seems fair to surmise that 2016 is destined to be another blockbuster year for live touring. And while the smaller event circuit has been hit by a number of closures, multi-arts spaces and dynamic promoters are helping to keep things busy in the mid to lower reaches of the touring market.

All of which would seem to be good news for touring sound engineers – and indeed many of those who spoke to Audio Media International indicated that their schedules for 2016 are looking decidedly busy. But what is perhaps less obvious on the surface is the increased pressures that now face many touring engineers – from unforgivingly short turnarounds to budget issues that mean they must frequently rely on in-house systems. In which context, the equipment they do take on the road – for example, specific microphones and tried-and-trusted outboard – is perhaps more highly prized than ever.

But while there are other, longer-term concerns about the live music sector – notably a feeling that too many of the larger, pop-oriented tours are relying on non-live elements – there is generally a sense of optimism and satisfaction that this market remains so buoyant more than 10 years after the latest live music boom began. For now, at least, this road has no end in sight…

If there is one recurring theme of the interviews conducted for this feature it is that tour budgets are evermore finely tuned and allow no capacity for waste whatsoever. Accordingly, many engineers are being obliged to work with in-house systems wherever possible. While some on larger tours are able to take their console of choice with them, many others are having to adjust to what they are given on a nightly basis. In such cases, the audio touring inventory may only stretch to a generous selection of microphones and some favourite outboard.

Rob Sadler has been working as front-of-house engineer for fast-rising singer-songwriter James Bay since January 2015. “Other than UK and European headline tours I have been using in-house consoles,” he says. “But we do have some favourite microphones, and Audio-Technica mics have proven to be ideal for this artist; we’re using AE3300 vocal mics on everyone, AE3000 on all guitars, AT4050 on drum overheads and so on. I have also been making the most of three Empirical Labs Distressors [compressors], which I have really enjoyed working with.”

In an ideal world where budgets were no longer an issue, he admits he would love to take a Digico SD9 and an L-Acoustics rig to every show. “We used a K2 on the last UK run and it sounded fantastic,” he recalls.

Jamie Harley – who is currently in the midst of extensive touring with Hot Chip, and has also lately been out on the road with pioneering electronic duo Autechre – notes that with Hot Chip, “we have a ‘requested rig’ of d&b and an Avid Profile desk that I inherited from the band’s previous engineer four or five years ago. But otherwise we hire in everything as we go, ?apart from microphones, where the selection includes DPA 4061s, Røde mics and Shure SM58s for vocals.”

A willingness to help keep overloads low by minimising freighting costs is now an integral part of the touring experience. “There is generally no money coming from record companies for touring, or if there is it has to be paid back very soon,” says Harley. “This means that bands are reliant on merchandising, selling for syncs and general income from touring – hence why the [whole operation] has to be very cost-effective.”

While the amount of additional equipment being taken on tours with lower- to medium-level acts seems to be diminishing, some engineers are still keen to use a fair chunk of their favourite outboard. Mathew Acreman – currently touring with alt-rock band Drenge – is a case in point.

“For several years, I toured with a Soundcraft Vi6 console and still have a lot of time for that board,” he says. “For me it was the first digi console that bridged the gap between analogue and digital. It felt great to use and has nice, natural-sounding preamps. Due to space and weight limitations, I have since moved to the Midas PRO2. It’s a Midas and sounds like a Midas. When touring the PRO2, I tend to carry my own FX unit, consisting of a couple of Lexicon reverbs and a TC Electronic D-Two. Some of the on-board FX aren’t to my taste, so I use most of my FX externally.”

But while many engineers still have their favourite systems, most would concur with the sentiments of Paolo ‘Red’ Talami, whose FOH mixing credits include the 1st of May Music and Pistoia Blues festivals, both of which take place in Italy. “I don’t feel really ‘loyal’ to specific brands, although I must say that I have worked mainly with brands like Martin Audio, Clair Brothers and Turbosound. [Instead] as a freelancer, I think that an engineer can’t be ‘loyal’ to a brand but rather be prepared to work with all of them,” he says.

Time is the enemy

While engineers generally show no resistance to working with a wide variety of different console and speaker systems, there is a greater sense of reservation about the increasingly hectic nature of tour schedules. As managers and promoters work to maximise revenue, days off are increasingly few and far between; while during festival season, turnaround times of less than an hour between acts are not unknown.

Acreman relates an episode that is by no means untypical. “I’m not one to moan (cough) – ask anyone who has worked with me! – but the stress of constant touring with minimal turnaround time can have a massive negative effect on the performance of both the artist and crew,” he believes. “I can remember one particular American tour where we were finishing a show at around 11pm, checking into the hotel by midnight then awoken by a 3am alarm, at which point we’d get up and fly to the next show. Although we joked about this for the first few days, the novelty wore off fairly quickly and both the band and crew began to function [on] empty. By the third week, I was starting to ask myself some serious questions. Things are generally pretty good though, and although there’s the odd occasion of sleep deprivation it’s all pretty civilised.”

Sadler suggests the tight turnarounds are particularly acute during festival season. “You might struggle [to do all the line checks etc.] in the very small windows during the first two weeks of festival season, but you quickly get to the point where it becomes like clockwork,” he says.

While there is a general consensus about the current state of play, opinion is more divided about the long-term outlook for live touring. Most felt confident about activity levels staying strong in 2016, although Talami believes that the market in Italy “has already slowed down… In the future – as has been the case for some years now – I think there will be a greater number of ‘big events’ and fewer tours.”

Almost everyone agrees, however, that increased integration of AV and IT systems will necessitate significant additions to the average engineer’s skill-set. In part this will be dictated by the multi-system familiarity required by today’s touring set-ups; but also playing a role will be the tendency of more venues to move towards a unified networking infrastructure.

Marc Graham – who is currently touring with James Bay, alongside Rob Sadler, in the capacity of production manager and audio engineer – puts some of these developments in context. “In any other industry one would be expected to become an expert in a particular field, using a particular piece of equipment,” he says. “By contrast touring engineers need to become fluent ‘experts’ in a vast variety of audio consoles – all with different GUI and operating systems, [and] all with different methods of processing audio.

“This trend – along with the industry-wide implementation of Dante networking and fibre systems, etc. – means that an audio engineer’s job is moving into the realms of computer engineering [and no longer just involves] the art of mixing. But while all touring engineers need to be up to speed on the latest console and networking systems, this should never detract from the core role we have – the ability to mix audio for the masses. I must say that I admire those engineers who embrace audio quality rather than technology, and for example tour Midas Heritage consoles and hardware outboard.”

As far as Talami is concerned: “I expect the role of the sound engineer will be more and more often a programmer role of some kind. And because of that, there will be an increasing need for qualified personnel who are there to manage an audio system.”

Changing expectations of the front-of-house engineer will mean that education for those coming into the industry will need to be increasingly responsive. Harley, for one, would like there to be more emphasis placed on core mixing skills – and the fact that these should never be allowed to become subservient to the technology at engineers’ disposal.

“There is a danger that one can rely on the technology too much. [Newer systems offer the] opportunity to save a lot of space and money, but they still need to be set up and used correctly and imaginatively – or they risk turning people into automatons. Quite a few people coming into the business are very good at setting up the gear, but they can’t actually mix. Whereas to me, mixing is everything.”

While the tendency towards overly safe, pre-formatted shows is definitely something to kick against, the general mood among engineers interviewed for this piece is buoyant – enthusiastic even. And although the need to restrain overheads is only likely to intensify, for those who have chosen this way of earning a living, the road is really the only place to be.