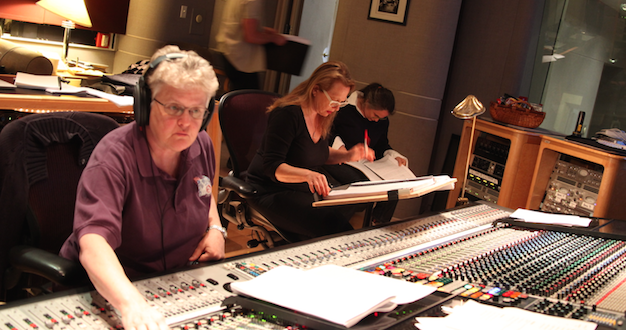 Now with a fourth Grammy to her name, Skywalker Sound’s director of music and scoring Leslie Ann Jones has had quite the career so far – one that stretches back more than 40 years. Adam Savage caught up with the experienced engineer after this latest awards triumph…

I suppose a career in music for you was inevitable (her father was renowned musician and bandleader Spike Jones) but how did you end up as an engineer?

I was playing in bands when I was a teenager and with one of the bands I did a lot of recording. Later on I joined a rock band and toured with them. I bought the PA system for the band and when they broke up I got the system back and just started doing the sound for other people. I was at a stage in my guitar-playing career where I was self-taught and I knew without having taken proper lessons and music education that I wouldn’t be able to be as good as I wanted to be and so I decided to do sound and really liked it. I enjoyed being able to contribute to somebody’s performance by mixing.

Your first career job was at ABC Studios, where you became their first female engineer. Was that a challenge for you, and what are your thoughts on the fact that more women are following in your footsteps?

I’m very happy that there are more [women getting into engineering], but to be honest when I started I tried not to think about it too much [being the only woman]. I always grew up as a tomboy hanging out with my brother and his friends and so I was kind of just used to being the only girl. The man that hired me at ABC said ‘I’d be glad to take you on, but we’ll have to see how people feel in the studio about having a woman in the control room’. I was always aware of it but it didn’t run my life; what did run my life was trying to learn as much as I could, not make mistakes and try and work whatever hours I needed to get my job done.

What advice then do you have for young people today – women and men – looking to make it in the business?

It really is about hard work. One of the biggest problems is there’s so much you can learn on your own and technology is so accessible and yet I meet so many people who push buttons because they can, and don’t really know why they’re doing it. We have this saying with my generation of engineers, which is ‘just because you can add a bunch of compression doesn’t mean you should’.

Taking workshops, learning from other people, asking questions, joining organisations like the AES – you have to decide that this is what you want to learn about, because it’s not going to just happen to you.

One thing that’s just happened to you is a Grammy (Best Engineered Album, Classical) for your contribution to Laura Karpman’s Ask Your Mama, which required complex live and studio work. Can you tell us a bit about that?

It started out as a live show performed at Carnegie Hall and then the Hollywood Bowl and Apollo Theater in Harlem. The composer [Karpman] really wanted to make a CD to memorialise the whole project and I was involved from the very beginning. Laura and I have worked together on many different projects so about seven years ago she asked me if I wanted to be the sound designer and mixer on it. To be able to hear the music in a recording studio and not just a live environment was just beautiful.

I’m so happy that people recognise what an incredible project it was, and from an engineering standpoint, because there were so many different elements to it.

You spend much of your time behind Skywalker’s Neve 88R. What do you like about the console?

I think we’ve had it for maybe 13 years now. It’s very well suited to my kind of recording style because it has such a wonderful sound and it’s a very flexible console in terms of being able to use it in many different ways. It’s very rare that I’m stumped when I use that console. I spend most of my time working on acoustic music – orchestras, string quartets, jazz, big band, things like that – so fidelity is very important to me, and everything goes through the console first and then into Pro Tools; I almost never go into Pro Tools first. I really couldn’t imagine using any other console.

Any other kinds of audio equipment that you’ve started using more recently? Some mics, perhaps?

I use all different kinds of microphones and we have a wonderful collection at Skywalker. I’ve been using Neumann and Sennheiser digital mics more now than I have in the past and I’m enjoying being able to use those, particularly when I’m doing live remote recordings, and I tend to do a couple of those a year. Royer makes a mic called the SF-2 and they’re just fantastic too.

Over the last decade you’ve also branched out into video game scores for franchises including Star Wars, Gears of War and Dead Space. That’s got to be a lot of fun too?

That’s something I really enjoy. I think part of it was that Lucasfilm had a video game company at the time, Lucasarts, and so I started doing games for them. Scoring video games is a little bit different to scoring films. With film there’s usually one composer, a director, there’s a whole slew of people; with video games it’s a very collaborative experience. I’ve worked on games where there have been several composers because there’s so much music. Everybody feels so lucky to be there recording an orchestra and I think that’s something people never get tired of.