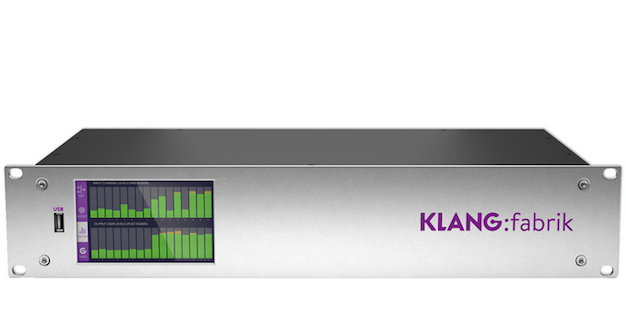 When KLANG:technologies first announced its intention to introduce 3D IEM systems to the market, it certainly turned a few heads. So, does it really work? Andy Coules gets immersed in this intriguing new technology to find out…

The use of in-ear monitors (IEMs) has become much more common in recent years; the sheer convenience and consistency of sound from show to show coupled with a reduction in monitor spill from the stage have made them a firm favourite with musicians and engineers alike. The standard model is simple and universal – you get a stereo mix delivered directly to your ears – however KLANG has come up with a new system that quite literally adds another dimension to the experience.

The KLANG:fabrik system offers 3D in-ear monitoring and is designed to be inserted into the existing signal chain between the monitor console and the IEMs (be they wired or wireless) and while the processing required is prodigious the process itself is really quite simple. It fabricates the kind of inter-aural delays and filtering that occur in the natural world, which our brains decode to give us accurate information on the placement of sound sources in a three dimensional sound field.

The unit itself is a 2U 19in rack module; the front panel is quite sparse with just a USB port and a 5in touchscreen. The rear panel sports 16 XLR outputs, three RJ45 sockets (for Dante and control), BNC word clock in and out, four ADAT optical ins and outs, dual IEC power sockets and a power switch.

The touch-enabled display screen is for status feedback only (due to its slow response) so you will need some kind of hardware controller in order to operate the system. This may seem annoying to some, that the system doesn’t come with all you need, but the assumption is that most people already have a suitable device which they would prefer to use, whether it be a tablet, laptop or phone – all are catered for by the KLANG:app software (Windows, Mac OS, Android and iOS). Also bear in mind that if you plan to control the system wirelessly you will require a wireless router (which again a lot of people already have to control their digital desks, etc).

To get your audio from the monitor desk into the KLANG unit you can currently use either Dante or ADAT; a MADI version is planned but not yet available. The number of inputs it can handle depends on how many outputs are in use – if all eight stereo outputs are in use you can only have 24 inputs whereas if you’re only using three stereo outputs you can have up to 56 inputs.

Once your input channels are all present and correct and the control connection is in place you can start to use your hardware controller to configure the mixes via the KLANG:app.

The app has four main screens: Config, Meter, Faders and Stage, which give you access to everything you need in an interface optimised for touchscreen devices. All that remains to do, in order to get the system up and running, is to connect the analogue outputs into your IEM system and you’re good to go.

When I first donned my in-ears and fired up the system it was configured to send a standard stereo mix – nothing new there – but the real moment of revelation came when I clicked on the 3D button. Suddenly the mix went from being between my ears and in my head to being all around me. I expected some kind of 3D effect but I didn’t expect it to be so real; it was a bit like the audio equivalent of that moment in The Wizard of Oz when it goes from black and white to colour.

Operation is very straightforward and the app is simple to use while still being powerful; creating your 3D mix is as simple as setting fader levels and moving a few icons around the circular’stage’. You quickly get carried away creating realistic mixes where you are centre stage and the band is arranged around you (which just proves that we all secretly want to be the lead singer).

What struck me was the degree of separation you get – it really lets you hear each individual instrument in its own space and makes the mix sound much more natural. After using it for a while switching back to stereo operation was a bit of a shock as the mix collapsed into my head and sat boringly between my ears – I had to remind myself that this is what every IEM mix normally sounds like.

While a monitor console is still required it is relegated to a slightly subservient role where it just provides the inputs and channel processing. The separation you get in 3D mode means you don’t have to work quite so hard to ensure instruments don’t overlap and mask each other’s frequencies, which should help ensure less muddy mixes but could make it possible for non-engineers (or even the band themselves) to mix the monitors.

Interestingly, KLANG has also developed an addition to the fabrik system called KLANG:vektor, which embeds a small motion tracker into your IEMs and enables the mix to respond to your head and body movements on stage and thus mimic the physical position of the instruments, keeping them anchored in space as you move around. There’s a lot of buzz right now about virtual reality but this promises virtual aurality.

What amazes me is how this technology has arrived fully formed – this is not a beta version of a concept which will improve over time but a fully realised end solution to a problem none of us knew existed. It’s one of those exciting new technologies that shift the paradigm. I fully expect that once people have tried it out they won’t want to go back to boring old 2D ears. 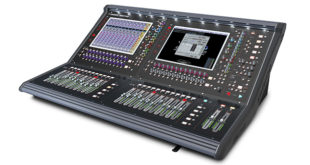