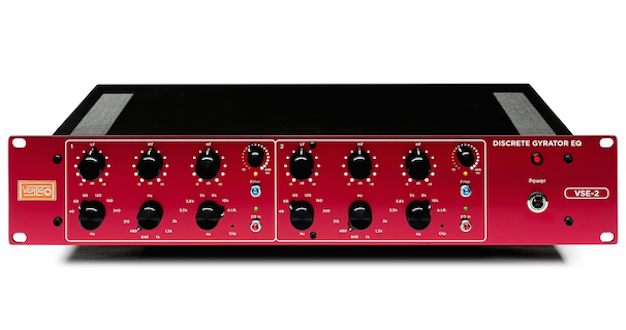 Following a satisfying first experience with the brand a few years ago, Nigel Palmer jumped at the chance to try out the newest addition to Vertigo Sound’s audio arsenal, the Discrete Gyrator EQ.

Germany is a country with at least its fair share of great audio design people, and one such is Andreas ‘Andy’ Eschenwecker of Vertigo Sound whom I first heard of in 2008 when reviewing the outstanding VSC-2 Quad Discrete Compressor – now something of a modern classic. A look at the company’s meticulous and striking component layouts tells you that here is someone who cares about detail, an impression that’s more than confirmed on listening. One of Eschenwecker’s strengths is the combination of classic ideas with modern implementation, and this may be seen in the Vertigo’s latest offering, the VSE-2 Discrete Gyrator EQ.

Originally proposed in 1948, a gyrator is a type of electronic network that can be used at the heart of equaliser designs as an alternative to its even older wire coil predecessor, the inductor. Although inductors are still popular with some designers looking for a vintage sound, they are expensive and have inherent issues; on the other hand, gyrators (aka ‘simulated inductors’) can work better than the ‘real thing’ and give the designer more freedom, a factor put to work in the VSE-2 to create, among other things, a tube-like distortion spectrum.

The VSE-2 equaliser has a conventional, if quite deep, 19in 2U rackmount form factor. The unit’s front panel is an attractive dark red colour with control markings in white, and two identical channels of EQ with three gyrator filters each – marked LF, MF and HF – that occupy most of the panel. The boost and cut controls use discrete components and are switched, with amplitudes of ±1dB, ±2dB, ±3.5dB, ±5.5dB and ±8dB. The band frequency selectors have corresponding legends laid out on the front panel in a pleasing wave shape, and the 18 points are: LF 40, 60, 80, 120, 160, 240; MF 315, 480, 640, 1k, 1.3k, 2k and HF 2.5k, 3.8k, 5k, 8k, 10k plus A.I.R. This last stands for All Impedance Resonance, and is a useful ‘air band’ enhancer. You’ll notice the frequency points don’t overlap – while this is often considered a virtue in an analogue EQ as it can, for example, allow for slightly different frequencies at crossover points to ‘get in the cracks’ of critical areas like the midrange, with the mostly broad shaping nature of the VSE-2 borne in mind I didn’t miss this.

The unit doesn’t have bandwidth or ‘Q’ controls, as it’s a proportional Q design (Vertigo call it variable Q) where the more cut or boost applied the steeper the bell curve becomes. This helps keep controls to a minimum and is an effective way of working, as I know from a variation on this in my own main mastering EQ at Lowland Masters. Each channel has a bypassable rotary high-pass filter offering a 24dB per octave slope between 10 and 400Hz – a useful facility for cleaning up the low end – and concluding the roundup of front panel features with the power switch to the right. When powered down the VSE-2 continues to allow audio through in a true hardwire bypass.

Once set up, I tried the EQ on a range of material. My immediate impression was of beautiful, malleable sound and a refreshingly simple way of accessing it; the VSE-2 has a delicious hint of a valve quality about it without a glass tube in sight, and this gets progressively warmer the more you push the level, to around 1% total harmonic distortion while maintaining bags of headroom and low noise.

The low band is a revelation: warm and articulate without ever sounding boomy or harsh, it’s possible to add considerable weight and loudness to a signal if you wish, and where appropriate I found myself boosting further into the upper bass/lower mid area than I’m used to without sonic penalty. Interestingly, I didn’t feel a lack of shelf curves – although shelves can be a useful way to lift or cut a chunk of low or high frequencies without changing inner balances too much, there’s something about the VSE-2’s approach that can promote a similar feel but in a more positive way. Midrange boosts (great on guitars and vocals) and cuts (equally good for containing general ‘forwardness’ or harsh areas) were exemplary and the high end had a silky quality I’ve rarely heard, again without harshness. In fact HF boosts are quite addictive and can be easy to overcook at first, although familiarity with the unit soon overcomes this tendency. Finally, the A.I.R. HF setting works well at providing a different kind of smooth high-end lift, and is a very usable additional facility.

In my opinion, Vertigo has done it again. While the VSE-2 wouldn’t be my first choice as a main mastering equaliser, it does fit the bill very well as a secondary ‘broad shaper’ on any kind of music. Where I think it excels would be for tracking as a dual-mono EQ with the added bonus of the powerful high-pass filter, or particularly on the mix bus where its ability to gently nudge chosen areas in a characterful way would be a real gift to many mixer/producers.