Home / Live / Complicite’s The Encounter – Bringing binaural to the Barbican 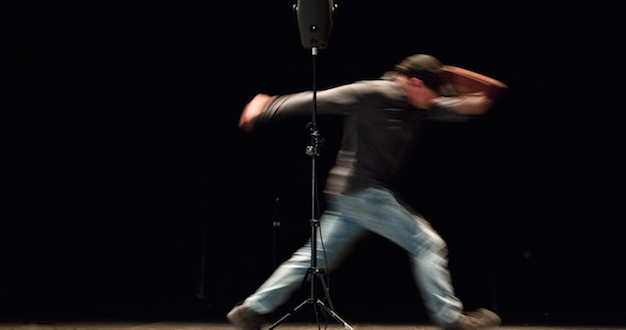 Complicite’s The Encounter – Bringing binaural to the Barbican

How often do you hear of a stage production featuring more sound operators than actors? When we heard this was the case with The Encounter, theatre company Complicite’s latest project, now running at the Barbican Centre in London, let’s just say our interest was piqued somewhat. And when we further discovered that it involved award-winning sound designer Gareth Fry, plus the clever use of binaural sound both recorded on location and performed live, the opportunity to find out more seemed too good to miss.

Directed/written by and starring Simon McBurney – also known for major parts in recent films such as Mission: Impossible – Rogue Nation and The Theory of Everything – The Encounter is a show like no other. You won’t find any fancy backdrops, dazzling visual effects or large ensemble casts here – McBurney performs solo for the duration – but there are reasons for this, the main one being that the focus is almost entirely on what the audience is hearing instead of seeing.

The story is based on a book called Amazon Beaming, which McBurney took possession of 20 years ago, and has spent the last 15 trying to figure out how to tell it in an innovative way. It’s centred around a real-life account of American photographer Loren McIntyre, who went deep into the Amazon to capture some shots of an indigenous tribe, but loses his way back to base camp and is left with no choice but to assimilate with the locals until he can find a way out.

So how do you bring this to the stage and make it truly captivating? According to Fry, it was always McBurney’s intention to do something completely unexpected: “The company [Complicite] has always been quite cutting-edge with its use of technology to tell stories,” he explains. “We looked at conventional ways of doing it but everything felt wrong; you can’t have a painted backdrop of some trees. I think there is an expectation that theatre shows will use technology in more sophisticated ways, not for the sake of it but to find new and interesting ways to tell the story.”

And the result is certainly unconventional. One of very few objects you’ll see on stage is a binaural head, which McBurney cleverly uses to communicate intimately with the audience member, who dons headphones throughout. So a whisper into the right ear of the head would be received by the listener as though the head on stage was theirs. The actor also plays around with several voices – his own, that of the photographer in the story and various others – that require the use of five microphones that are pitched differently to suit each personality.

Binaural is not a new thing, of course, but what is new is this way of applying it. And even though there are many more modern ways of immersing the audience in sound, Fry is glad they went with this method.

“It’s a way of replicating the human hearing system, so if you were to record something binaurally and listen to it back over headphones it’s exactly like you being there and it’s better than any other technology, including surround sound, at recording a space,” he says. “It’s a great technology for telling stories and taking you to unusual places like the Amazon rainforest and it places you, as the audience, on stage with the performer. It creates this wonderful sense of intimacy.”

It’s also the first time that Fry has properly utilised binaural sound for a theatre show, and although there have been others that have experimented with it in this field, he isn’t aware of anyone going about it quite in this way.

“There’s another theatre director called David Rosenberg who’s been doing it for a few shows over the past ten years or so and he’s explored the use of recorded binaural sound a lot,” he notes. “We’ve got a mix of recorded and live binaural sound and I think the live part is quite unusual – I’ve not heard of anyone who’s done that before.”

To achieve the difficult task of making the audience feel like they’re being taken on an Amazon adventure with so little to guide them visually, it was crucial that the somewhat chaotic rainforest soundscape be brought to life as accurately as possible for this production. And what better way to do that than to travel to the place itself?

“We were in the Amazon rainforest for a week, meeting the tribe who lived out there and hearing their stories,” Fry recalls. “They took us on little expeditions out in the rainforest to record different things and get the sounds of the forest at various times of day.

“If you want to create a sense of the Amazon rainforest it’s very difficult if you haven’t actually been there to know what you’re trying to get a sense of – the heat, claustrophobia, mosquitoes, things like that.”

But even visiting the location you’re trying to recreate doesn’t guarantee you’ll be coming back with all of the sounds you went out there for, which is why it was necessary for Fry and his team to make some additional trips to a couple of slightly less exotic spots.

“I went to the London Hospital and School of Tropical Medicine, where they have some mosquito colonies there of different breeds. There’s a section of the show where he’s swarmed by mosquitoes and that’s a very difficult thing to get on location and a different thing to isolate the mosquitoes as the rainforest is a very noisy place,” he says. “So I went there, got a tent full of mosquitoes, put our binaural head inside it and let them buzz around.

“One of the challenges of binaural sound is it’s very difficult to layer normal sound effects on top of it; you can really hear when something is recorded binaurally and normal sound effects layered over the top sound quite flat. There aren’t that many binaurally-recorded sound effects so a lot of the sounds we had to go and get from scratch. We also got 30-40 extras to go to Epping Forest and had people running around and getting footsteps there.”

As for the choice of equipment, there are Sennheiser G3 Series wireless systems, Countryman headset mics, the all-important Neumann KU100 binaural microphone, a range of Macs running QLab and Ableton Live for the playback and looping, two Yamaha QL1 mixing desks – one for each operator – a Yamaha DME24 processor and last but not least Sennheiser HP 02-100 headphones for the audience.

“We’ve custom designed this headphone infrastructure because everybody’s wearing wired headphones and it’s quite a big thing to install the cabling infrastructure for 600 pairs of headphones, so that involved quite a lot of work to make a system that can do weekly touring and still [allow us to] install several kilometres of cable each week underneath auditorium seating that was never designed for this,” Fry explained.

Earlier we mentioned the unusually large sound crew, but who are they, and as this clearly isn’t a normal arrangement, what are their responsibilities?

“There’s myself, our operators Helen Skiera and Ella Wahlstrom and my associate Pete Malkin, who’s been doing a lot of the design work with me and creating a lot of the material that we play,” Fry reports. “Typically on a theatre show you have one sound operator and they run the sound for the show – mixing the mics, the music, the sound effects and all that sort of stuff – but this one is so complex that we’ve had to expand that to two people and part of that is also because we’re not working from the existing script.”

And that brings us onto another interesting element of The Encounter – no two shows are ever the same.

“We’ve written everything from scratch and so the script is an evolving thing and we keep honing it with every performance, trying to make it better and try out different aspects of the story – make some things bigger, some things smaller – and so the show is never the same show twice.

“Helen and Ella have to improvise with Simon quite a lot – sometimes it’s prearranged and he’ll say ‘I’m going to try this differently tonight’ or he’ll just do it on the night. So we’ve spent quite a lot of time making everything quite fluid so that we can change the order of things quite rapidly,” Fry explains. “With a typical theatre show you’d try and program everything as much as possible so that it can happen repeatedly, but we’ve had to make it more like the sound operators are musicians and they’re having to jam along with Simon.”

Having fulfilled sound design duties for such a wide variety of acclaimed stage productions not just in London but in the United States, Germany, Ireland and even South Korea (Let The Right One In at Seoul Arts Centre), where he had just returned from when our interview took place, Fry is about as experienced as they come, but he also knows there will always be more exciting challenges out there for him, and The Encounter was undoubtedly one of those.

“This is a dream-come-true project because it’s so reliant on the sound to be part of how we tell the story and demanding on a technical and artistic level,” Fry concludes. “So it’s been a joy to work on.”

Complicite’s The Encounter is playing at the Barbican until 6 March 2016.