Another Rising Star on the scene, AMI spoke to up-and-coming professional Jonas Andreas Jensen, winner of both BAFTA and NFTS Sound Design Awards. Based in North London, he currently works with Sony Creative Service Group London as a sound designer on their Project Morpheus Virtual Reality headset. He chatted to us about his sprawling education and experience from Denmark to London, his admiration for sound editor Ren Klyce and his hectic and successful last few years.

How did you start out?

I attended a film course at The European Film College in Ebeltoft, Denmark, back in 2007. This was a crash course introduction to film making and within the first week I found myself preferring the role of sound recordist and sound designer rather than any other role on the film crew. This course let to an internship in the Copenhagen based sound production and postproduction company Gilyd.

There I started as a trainee working both on location as a sound recordist and in the studio as a sound editor.

During my 3 years at GiLyd I started spending more time in post production than on location recording. The skills that I learned there and responsibility given was really a unique learning curve. I gained invaluable experience working on a wide range of Feature Films, Short Films and TV productions, both as a sound editor and sound designer.

The experience and portfolio I worked up during those years let me to apply for the MA in Sound Design at The National Film and Television School just outside London. This was a very intense and challenging two year course, and really gave me the opportunity to elevate my skills and explore creative storytelling through audio.

What made you want to work in pro-audio?

As many other people working with sound design, I started out playing music. This led to a more technical music creation using software like Abelton Live, Reason and Cubase. This, plus my passion for film and animation, took me to The European Film College where using audio in visual story telling really showed me what fun and exciting it was to combine all these passions.

Who would you say are your biggest influences stylistically?

The work of the American supervising sound editor Ren Klyce is something I find very inspirational. In particular his collaboration with Atticus Ross and Trent Reznor on David Fincher’s films are both exciting in mood, style and techniques they use to create their soundtracks. Two standout films are The Girl with the Dragon Tattoo and the more recent Gone Girl.

Can you tell us about any recent projects? What are you working on currently?

After graduation from NFTS in January 2014 I started working as a freelance sound designer. I was lucky enough to win a Sound Design prize from Avid which really helped me setup my studio. From there I worked on a variation of projects including a feature documentary: Dead When I got Here, an audio installation with the Bristol based duo ANAGRAM: Door Into The Dark, which premiered at the Sheffield International Documentary Film Festival and recently was on show at the Tribeca Film Festival in New York where it won Bombay Sapphire Storyscapes Award. The graduation animation I did the sound design on, The Bigger Picture: directed by Daisy Jacobs, went on to win a BAFTA, and was nominated for an Oscar both in the short animation category. Currently I am working at Sony Creative Service Group London as a sound designer on their Project Morpheus: Sony’s Virtual Reality headset.

Can you tell us about some of your favourite gear? What do you find yourself relying on for projects?

The DAW I am relying on is Pro Tools. Pro Tools is the dominant force in Film and TV post production, so I have naturally spent a lot of time with this. My preferred workflow also makes me very dependent on a good mixing console. For this I am using my AVID Artist mix.

If you could work with one artist/group, who would it be and why?

It would have to be working for Ren Klyce on a David Fincher film. Recording bespoke source material for sound design work is something I really love doing and it opens up a much wider creative output. The ambience work going into Ren Klyce’s work always have them recording unique and interesting audio. Being a part of this would be amazing.

Where do you want to be in ten years?

In London working on new challenging projects. I love the collaborative nature of the film industry and my ambition is to continue being involved in creative, technical and challenging audio teams. Freelance is the most likely nature of sound design work, but working in-house would be another ambition.

Audio Media International is on the lookout for the industry’s top up-and-coming audio professionals as contenders for the Rising Star prize at this year’s Pro Sound Awards. If you think you or someone you know qualifies and would like to be involved, contact Audio Media International staff writer Matt Fellows on mfellows@nbmedia.com or +44 (0)20 7354 6001. 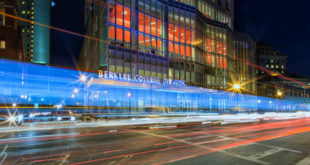