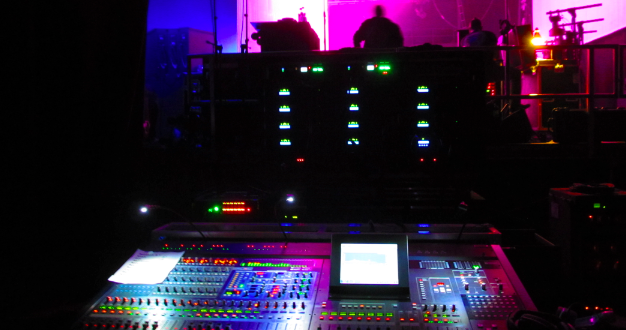 I previously wrote at some length about an issue that blights the daily existence of sound engineers all around the world – the mixing desk being in the wrong place.

In that instance I was writing from the point of view of the front of house (FOH) engineer, but it’s a problem that also affects monitor engineers albeit in a somewhat different manner. The way in which it affects monitor engineers highlights the differences between mixing FOH and monitors – two roles that utilise a similar skill set yet require them to be applied in quite different ways.

I was recently asked to do the monitors for the support act on a sold out European Arena tour and, while you will typically find me plying my trade at front of house, I’ve always enjoyed the opportunity to spend some time at the other end of the multicore. Monitor mixing is often considered the less desirable sibling of front of house mixing, or a place where people cut their teeth keeping the band happy before they’re promoted to the glory of FOH. I must admit the first time I was invited to mix monitors I considered it a step down from the job I wanted to do, but once I got into it I found it quite satisfying in it’s own right. When you’re on stage, working alongside the band, you feel much more part of the performance – what you do has a direct effect on the band and how they play so it’s thrilling and exciting in equal measure.

At FOH your main role is to piece together a single mix and ensure it propagates to the audience in a way that conveys the musical content in the appropriate manner. So when the desk is in the wrong place it impacts your ability to constantly monitor the evolving mix and react in real time.

Over in monitor world you’re required to piece together multiple mixes to be deployed by in-ear monitors (IEMs) or speakers (often both), each of which is tailored to the requirements of a specific individual to enable them to perform and produce the appropriate musical content. If the desk is in the wrong place it doesn’t affect your ability to monitor the mixes in the same way it does at front of house, as you can still put your listening wedges where you need them or use your IEM pack wherever you are. No, the main problem with the monitor desk being in the wrong place is the key issue of communication.

Mixing monitors is all about communication – the musicians on stage need to be able to communicate to you what they need in their ears (or wedges) in order to be able to play, so a clear line of sight is vital. When the desk is in the wrong place this can be tricky, especially if you’re the support act. The demands of the headliner’s production often require you to set up in less than ideal places, usually behind their monitor desk, but sometimes you’re shoved so far back as to be off the stage completely, making it difficult to maintain lines of communication.

When this happened to me I noticed something about the subtleties of monitor mixing that had not previously occurred to me. The majority of the on-stage communication is done via hand signals, the universal pointing at something then pointing up or down is usually enough to convey what needs to go up or down in the mix. A simple nod or thumbs up in return is all that’s required to confirm the message is received and understood.

But there is an extra layer of communication I wasn’t fully aware of until my ability to watch the stage was taken away. I realised that I relied quite heavily on body language to judge if people were happy on stage. You can usually tell when someone is happy from the way they move because if they’re happy then they relax and you can see them enjoying themselves. When they’re not happy, their movement is more stilted and you can usually tell that something’s wrong so you instinctively check their mix to ensure all is well. This ability to pick up on such subtle cues increases the more time you spend with a band on the road.

Things have certainly changed in monitor world in recent years. When wedges dominated, musicians had a degree of control over what they heard, simply by moving about or tweaking their own volume they could help in achieving the desired balance on stage. But in the age of IEMs, which are essentially high attenuation ear plugs with speakers in them, musicians are removed from the ambient sound on stage and thus demand a much fuller mix in their ears. And if that isn’t complicated enough the prevalence of digital desks with their advanced recall abilities means more productions are demanding the ability to tweak mixes on a per song basis to produce more accurate mixes, but I digress.

When I wrote about the desk being in the wrong place at front of house it was an open plea to those responsible for the design of venues to take into account the needs of the sound, which is undeniably a key part of the concert-going experience. However when it comes to the monitor desk being in the wrong place there is little that can be done – if you’re a support band then you have to learn to deal with these difficulties, it’s the nature of the rock and roll beast. The only way to handle it is to get yourself in the right place as much as possible during the sound check and then do your best during the show. If you have a digital desk the ability to remote control can be invaluable but you may have to just make the best of a bad situation.