Allen & Heath’s Qu-32 desk follows fast on the heels of the Qu-16 and Qu-24 and thus benefits from a 1.5 firmware version which has already addressed most of the minor niggles in the operating system (such as the ability to name channels).

A key selling point is that it features 33 fully automated faders and thus is one of the few digital consoles, of any size, that has a fader for every input channel (with a preamp). This means fewer layers are required and thus helps prevents layeritis – that affliction which blights users of digital consoles where you get lost in layers.

My first impression of the Qu-32 is that it is functional without being flashy – the front panel is straightforward and unexciting in the way that tools should be. The body is relatively slim and curves round in a pleasing J curve, the back of which houses all the I/O. The button LEDs illuminate in a way that makes them viewable in both bright and dim light and the 16 x 10cm touchscreen is bright and responsive (a quick poke with a Sharpie suggests that it is capacitative rather than resistive).

Basic operation is very intuitive; I was able to execute all fundamental mix functions (i.e. EQ, gate, comp, FX, aux sends, DCAs, short cut keys) within minutes of first turning it on. The workflow is well thought out and quite analogue in its feel – I didn’t need to spend any time scrolling through menus or reading the manual to do what I needed to do.

Taking a look around the back there are no surprises. There are 32 mic/line inputs (on balanced XLR and 0.25in jack respectively), a talk back XLR and three stereo inputs (two 0.25in jack pairs on the back panel and a stereo mini jack on the front panel). For outputs there are 24 XLRs (divided into L/R, Mix, Group, and Matrix), an alternate stereo main output (on 0.25in jacks with a level control on the front panel), a two-track 0.25in jack output, and an AES XLR. Then there’s the usual USB and network (RJ45) connections as well as a dSNAKE connector. The 32 jack line inputs are a nice touch as so many desks of this size cut costs by providing only XLRs.

There are no individual channel name displays, which seems a valid cost-cutting choice on a desk of this nature. There is a facility for naming channels but this is only really of use if you plan to use the Qu-Pad iPad app.

I was pleased to find that the default scene was configured very intelligently, which helped me put my mix together quickly and without any fuss. All the bus masters and FX returns are up and the busses are enabled by default, so as soon as you start sending level to effects or mixes you can hear it coming back/going through – a simple enough thing but it saves time and minimises layer flipping.

Mix, Group and FX sends can be accessed via dedicated buttons to the right of the master fader, which, when pressed, automatically put you in sends on fader mode and the master fader becomes the master bus level. The seven mix (four mono and three stereo) and four group sends (all stereo) have 28-band graphic EQs set up and ready to go (via the GEQ button) – they’ve done away with the top and bottom 25Hz and 20kHz filters, which I doubt anyone will miss. One very neat feature of GEQ mode is that the LED channel level meters become a basic RTA showing the level at each filter – quite helpful when chasing down that elusive burst of feedback.

Despite the generous complement of faders there is still the need for layers, and the Qu-32 has three. The primary layer is the 32 input channels; the secondary layer is all the stereo inputs, FX returns, group masters, FX sends, mix sends, matrix and DCAs – all laid out and labelled on a single layer – and the third is a custom layer, which can be configured into any combination of input or output channels (with a nifty ‘+1’ function that makes setting it up a breeze). Once the custom layer is set up it can be locked in using the ‘Custom Layer Only’ function so that it’s the only layer available.

The Qu-32 boasts four stereo iLive effects engines, featuring a selection of familiar and proven effects; the only thing missing is an amp simulator (which is not something I ever missed on the iLive but I feel would be useful on a desk of this size). The FX returns are stereo but conveniently only occupy one fader.

Another feature that I’ve yet to see on any other console of this size is the Qu-Drive, which enables the recording and playback of 18 channels of 48kHz 24-bit audio direct to a USB stick. This can be any combination of input and output channels or just the humble stereo out – you just need to ensure your USB stick supports high sustained transfer rates. And if that isn’t enough you can connect the console to a Mac or PC for 32 x 32 channel recording and playback via USB (i.e. the desk acts as a combined mixer and sound card).

So how does it sound? The preamps are transparent without being too clean and clinical – I particularly liked the warmth imparted by the channel compressor.

One aspect I found pleasing is that the Qu-32 is the top of its range. So often desks of this size are the bottom of the range and thus are really just scaled down versions of the desk you want to be operating.

Allen & Heath has managed to strike that difficult balance between including all the advanced features that professional engineers demand while also making it accessible for non-expert operators. Its intuitive and straightforward interface makes it a pleasure to use for all. 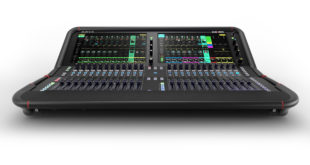