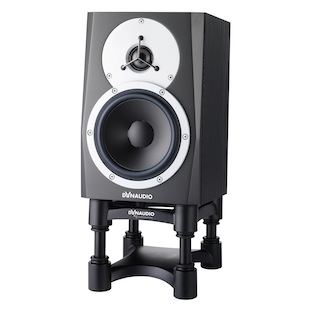 Something is rocking in the state of Denmark, writes Alistair McGhee.

Of course when Shakespeare wrote words similar to that all those of years ago he was probably thinking of The Killing and Sofie Grabol’s fine knitwear collection, and who can blame him? But maybe the Bard had something more rock and roll in mind.

I love a small monitor, I have Harbeth’s LS3/5As, Spendor’s 3/5se and most of my daily listening is done on Tannoy Reveals – all small boxes with two drive units. So Dynaudio’s new BM Compact mkIII fit right in at McGhee towers. Except, Dynaudio sent them along with its BM9S II sub. Now I’ve never been a fan of subs really, if I wanted John Entwistle to live behind the couch, well I would have arranged the room differently. More of the BM9S II later.

The BM Compact mkIIIs are teeny tiny, just under 7in across and 10in high. They’re active with balanced and unbalanced inputs and some tweakery available on switches for high pass, low, mid, and high frequency adjustments. You don’t get a volume control but you do get a three position switch offering +4, 0, and -10dB. I parked this at -10 to give me more subtlety on the volume control. After all Mr Marenius paid a fortune for the P and G volume control on his kick ass DAC-S2, or at least that’s what he told me. I wanted him to get his money’s worth and also using the Swedish Marenius kit kept it Scandinavian driving the Dynaudios.

Sitting on top of my workstation, flanking the monitors, mic amps, and interfaces and with the sub central under the rest, I probably had the BM Compacts pretty close to their natural environment. One very nice touch is that Dynaudio includes a pair of IsoAcoustic stands which will lift your monitors 3in or so off desk height and put the tweeters that bit closer to earline.

I was lucky enough to have about three weeks with the Dynaudios and I have to admit I enjoyed them immensely. Sitting as I do in the nearish field the limitations of small speakers in terms of absolute levels and the ability to fill big spaces with bass are not such a problem. The Dynaudios are aiming to be a working tool, monitors for production rather then speakers for casual listening. And as monitors I appreciated their strengths. Having left foobar2000 running I suddenly found myself listening to ‘A’ Bomb in Wardour Street. The space around the kit leaps out of the sound stage, guitar and vocals punch through the mix, laden with artistic aggression, the sound is never tiring or shouting. And this despite the obvious fact that deep bass is limited from such a small cabinet. Nice job Dynaudio.

One of the Compact’s best features is their transient ability, if you put real smack on tape (careful now) then you’ll hear it in playback, edges are crisp and this lends to the sense of overall accuracy. And to achieve this without hyping the top end is a nice piece of engineering, too often gains in transient performance come at the expense of neutrality. One other very attractive aspect of the Dynaudios is the ability to do quiet while at the same time doing loud. If you are trying to mix with dynamic subtlety you need monitors that don’t mask the depth of your mix while still maintaining the scale of your peaks. The Compact monitors pull this off in a very convincing way. In my medium-sized room loudness was not a problem, the Dynaudios were comfortably loud enough.

So what are the down sides? Well small monitors can sometimes feel congested when large-scale reproduction is required and here the Dynaudios are only human. I will say that with the Dynaudios I would always check it wasn’t just a congested mix. They mostly speak truth. Secondly there’s the question of bass. Physically you need more driver real estate to get low bass. Now, I am probably the world’s least bothered by bass person. It’s not that I don’t care about the bottom couple of octave it’s just that I feel more sensitive to problems in the midband and at the top end. However closely attentive readers will have noticed that Dynaudio has thoughtfully provided me with a BM9S II which can only be described as a subwoofer.

Dynaudio’s sub has flexible set up options, XLRs in and out for routing your stereo signal through the sub. There is a master gain control, a continuous low pass filter from 50 to 150Hz, the ability to roll off the signal passed through to the monitors, a separate LFE in and out which can be used to drive a second slave sub, and a green power option. The BM9S II can sit in automatic mode listening across the input and will power down when it works out your neighbours have complained and you’ve gone to headphones.

I parked the sub under the workstation, fired it up and rolled through my mix list. What did I think? In short – pretty damn good. One of the main problems with subs, apart from exciting room modes you never knew you had, is teenage temptation. You can set the sub level wherever you want and the temptation is to set it somewhere between structural movement and bowel movement.

But once you’ve overcome such childish notions the extra low frequency extension is really nicely handled and integrates well with the BM Compact mkIIIs. I found them a compelling combination. Here is not the place to discuss the universality of a separate subwoofer but for me sitting close to the monitors with the sub central just seemed to work. You will get centralised low bass with this set up but not in a way I found distracting.

I think probably the compelling attraction of combining the two Dynaudio products is providing an upgrade path. I think the Dynaudios are a totally compelling small active monitor solution. Accurate and professional to the core. But what happens when the upgrade bug bites? Well the BM9S II provides the answer. You retain the virtues of the Compact monitors while adding the extra grunt down low. Sweets to the sweet, as the Bard might say.

Alistair Mcghee began audio life in Hi-Fi before joining the BBC as an audio engineer. After 10 years in radio and TV, he moved to production. Most recently, Alistair was assistant editor, BBC Radio Wales and has been helping the UN with broadcast operations in Juba.