Home / Opinion / ANDY COULES: The Desk is in the Wrong Place 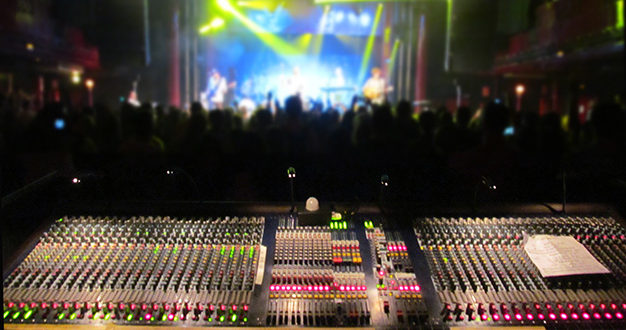 ANDY COULES: The Desk is in the Wrong Place

I was on tour in Turkey recently and I came across that issue which blights the daily existence of sound engineers everywhere – the desk was in the wrong place.

It was a club tour so I was prepared for some compromises but this is the kind of thing that’s difficult to prepare for, tricky to work with and not always apparent during pre-production.

Often you turn up, ready to make some noise, and you find the desk has been shoved to the back wall, suspended in a balcony or pushed off to the side and you quickly find yourself mixing from a position where you can’t hear the PA properly.

Such placement is rarely the decision of sound engineers, it’s a matter of convenience, the desk is put where it doesn’t get in the way or take up valuable space where paying customers could be. In this instance the desk was placed in front of the stage, on the right hand side such that it was immediately in front of the bass bins and directly beneath the main PA hang.

This wasn’t so bad during the sound check, as I was able to walk a few steps back and to the left to hear how the PA was sounding but during the sold out gig I was right in the densest part of the crowd and completely unable to move. This meant I was trapped in a zone where the mix I was hearing was not only incredibly bass heavy and mid/high light but I could also hear a large amount of stage spillage, not just from the back-line but also from the monitors, all of which coloured how I perceived the mix.

Therefore I had to ignore most of what I was hearing and mix based on what I could see on the desk and what I had heard during sound check – not an easy task. Normally you rely heavily on your ears coupled with your experience and your familiarity with the band to produce the desired results but rather than mixing with my ears I was mixing more with my brain as I had to think carefully about everything I heard and imagine how it sounded for the audience, then tweak it accordingly.

This is not a great stretch for most engineers – we’re often required to imagine how the mix sounds in various parts of the venue to ensure it sounds as good as possible for as much of the audience as possible. But having to modify every impulse and impose a layer of thought on every single minute mix decision just adds another layer of complexity to something which is already quite a complex process.

An average mix is composed of around 20 to 30 individual elements, which are either miked up or input directly. Once all the mix elements are suitably captured and present on the desk we have at our fingertips a wide array of sonic sculpting abilities. We can shape the dynamics with gates and compressors, cut or boost chunks of the frequency content with EQ, position them in the sound field using gain and pan or add in a wide range of global or spot effects of a subtle or overt nature.

I like to envisage the mix as a slow motion exploded view of the sonic landscape evolving in front of me, much like those technical manuals that show exploded views of equipment components and how they all fit together. During the show my attention is flitting about, zooming in on individual mix elements, evaluating them in isolation and then zooming out to ensure they’re working well with all the other elements whilst contributing appropriately to the whole. But this sonic landscape is constantly shifting as the music moves forward inexorably from second to second – so constant attention and re-evaluation is vital to ensure the mix is working and continues to work. Therefore the ability to hear exactly what is going on and react quickly is vital to ensuring the mix is as good as it can be.

The art of mixing is evolving as new technology comes into play – PA systems are becoming higher in their fidelity, more even in their coverage and digital desks are changing the way we mix. In the good old analogue days the mix would be unique every day, built from scratch at the beginning of the sound check and obliterated when the desk is zero’d at the end of the night. There was some scope for automation, but the mix was essentially a performance in itself as you reacted in real time to what was occurring on stage. The advent of digital desks has changed all that – total recall gives us the ability to take our mix with us and snapshots enable us to tweak the mix down to the level of individual songs. All we need do is tailor the outputs to suit the room, load up yesterday’s show file and go.

The digital age also brings with it a facility which can help us deal with the issue of the desk being in the wrong place – remote control. The ability to wander around the venue and tweak the mix with a tablet can be extremely useful, however once the audience is in it’s not always easy to get yourself into a position where you can hear the PA (as was the case for me in Turkey). You still might be required to use your imagination, a faculty which isn’t commonly associated with mixing live sound, but which can be quite invaluable.

So where is the right place for the mixing desk? Measure the distance between the two main speaker stacks/hangs and then imagine two lines of the same length projecting out the front of the speakers into the venue, then angle them in until the ends meet and you have the sweet spot. The tip of an equilateral triangle, the point at which the sound system comes together, the right place for the mixing desk.