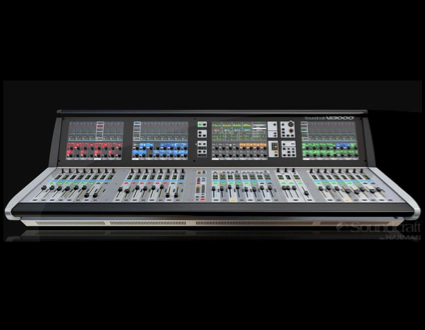 The DSP SpiderCore is based on the Studer Vista 1 engine, with Soundcraft’s Vi Version 4.8 operating software, and a fourth 24-channel fader layer. The surface operation and layout is similar to other models in the Vi Series, providing a familiar feel, as well as expanded functionality. The Vi3000 also offers upgraded mic preamps and 40-bit Floating Point DSP processing.

The desk is equipped with a more efficiently designed control surface, 36 faders, 24 mono/stereo busses and a sweeping black screen panel with four Vistonics II touchscreen interfaces. With its four touchscreens, the Vi3000 is the only console in its class that can be used by two engineers at the same time.

"Visibility of parameters and easy access to them are the most important features a console can have," said Andy Brown, Soundcraft’s Vi Series product manager. "When something unexpected happens – as it always does in live sound – being able to see a lot of settings quickly is a massive advantage."

In addition to a full complement of analogue and digital inputs and outputs, the console comes with MIDI, USB, Ethernet, DVI out, Dante/MADI record feed outputs, redundant power supply and other connections.

The console is also the first from Soundcraft to incorporate a Dante interface as standard.

Other features retained from the other Vi Series consoles include FaderGlow illuminated faders, the ability to store and recall snapshots and cues, compatibility with the ViSi app, built-in Lexicon reverb/delays, dbx compression, effects and more.