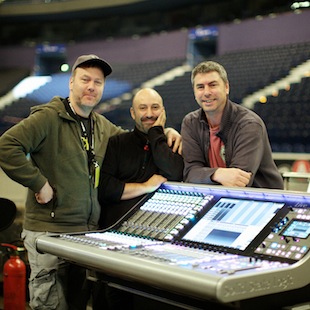 SSL Live heads back on the road with Peter Gabriel

When Peter Gabriel’s Back to Front tour heads back on the road next month, the tour’s engineers will once again be employing SSL’s new Live console.

“The first thing to say about Live is that it sounds really good and makes mixing live audio very easy,” says Ben Findlay, who takes care of FOH duties on the tour. “You get lots of separation and clarity. The EQ is musical, never harsh, and the dynamics are transparent even when compressing a signal hard, as you would expect from an SSL console.

"The mixes come together quickly when starting from scratch. Because the audio is very clearly defined, you have more options regarding relative levels, so elements of a mix that may normally be masked with another console are still clearly audible. This leads to accomplishing the often illusive third dimension to a mix that live engineers strive for — and that is a real sense of depth. The console is also extremely reliable with not so much as a flicker during the whole tour. I am now at the stage where I am sure I would miss Live if I had to revert to my previous system.”

Three Live consoles were employed to handle the Back to Front performances. Along with Findlay’s unit at front-of-house, there are also Live consoles used for the band’s monitors as well as for Peter Gabriel’s own monitoring system.

“Ben and I recorded a multi-track version of the Back to Front show during the U.S. tour in 2012, so we had a ready reference to run through the Live console when it became available before official show rehearsals,” says Richard Chappell, Peter Gabriel’s live show coordinator and personal monitoring and studio engineer.

“When we first worked with Live, we realised how very exciting and pioneering this console was. This console sounds great. The first part of the learning curve was the impressive touch screen that allowed each of us to configure the setup the way we wanted to work.

"The needs of monitoring are, after all, different from FOH. For me, Live is the engineering equivalent of what a musical instrument is to a performer. I can now do what I do better with Live.”

“Live is a hybrid console that has a touch screen but it’s also button operated; a real crossover between two ways of working,” says monitor engineer Dee Miller. “For an engineer, it’s a very powerful tool and capable of doing a lot of things.

"What I’ve had to do is learn how to use the desk to mix the show my way, so Live is a tool for any particular job as opposed to bending a job around a different manufacturer’s tool. It’s got some great features on it and it’s very powerful. Live sounds great, the clarity is extremely good and I would just say that you can hear everything really, really well.

"From an engineering point of view, I made many performers happy with their monitor mixes using Live.”

Previous INTERVIEW: Robby Krieger of The Doors on his LA studio
Next Soundcraft unveils Vi3000 console