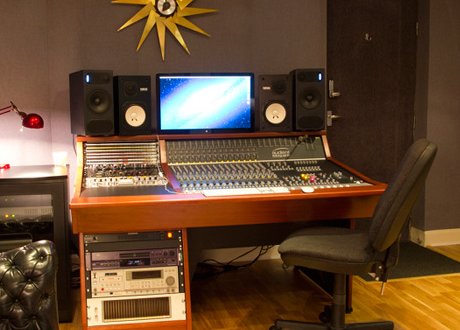 Audio Pro International, in association with AllStudios, presents the latest instalment of our Studio Spotlight, which focuses on London’s Ravenscourt Studios this month…

Ravenscourt Studios in West London is a unique sound and music production facility owned and run by Australian producer and engineer Sam Farr.

Situated in Ravenscourt Park – just a few minutes from the tube station and a 15-minute walk from Shepherds Bush – the studios opened in 2011 and provide a broad spectrum of services, ranging from music production and audio post production to songwriting sessions, mixing and remixing, voiceover recording and sound design.

Farr explained why he chose to launch a new studio at a time when many others in London are struggling: “To be honest, setting up a studio is something I have always wanted to do, so when the opportunity arose I grabbed it. Although I’m aware that big studios are finding it hard to command the higher rates necessary to cover their overheads, the market for smaller studios is really growing.

"At Ravenscourt we cater mostly for songwriters, producers and developing artists, people who bring in their own laptops running Logic or Pro Tools and maybe a vocalist or musician to record. We can also accommodate bands and small string sessions. In fact, whether you need a fully equipped room for a day, or if you prefer to bring in your own equipment for a month or more, our three studios can accommodate pretty much any kind of session requirement you have. All the rooms are sound-proofed, with booths or live rooms, air-conditioning, wireless internet, 24 hour access, security alarms and shared use of the kitchen and toilets. There are even tie-lines between all the studios for maximum flexibility.”

Studio One is the largest suite at Ravenscourt with a 15’3 x 14’9 control room and 18’8 x 15’5 live room. Until recently, both rooms were leased exclusively as a dry hire suite to a high-profile songwriter. However, they have now been completely refurbished and are available for recording sessions, including live band tracking, small string sections and overdubs. The control room centres around a brand new Audient ASP4816 analogue console, with a 24 I/O Pro Tools HD Native rig and a choice of PMC or Yamaha NS10 monitors. There are also tie lines through to Studio Two, which provide additional recording spaces with backline (Mapex/Pearl Export drum kits, various guitars, basses and keyboards) available on request.

Studio Two is the smallest studio in the premises, and is ideal for programming, songwriting or vocal overdubs. It can easily be used as two separate programming rooms with its 10’4 x 9’10 control room and 9’7 x 7’3 booth large enough to fit a drum kit. A Universal Audio Apollo Quad interface (Thunderbolt ready) and a Universal Audio LA-610 channel strip have been recently added to the spec. Farr commented: “It’s a great little writing/programming room based around a Mac Pro running Pro-Tools 10/11 and Logic 9. Monitoring is via Quested and KRK with preamps from Universal Audio. There’s also a fully weighted Roland keyboard plus various instruments available at no extra cost. Both rooms can be used as additional recording spaces for Studio 1.”

Studio Three is the largest songwriting room in the complex and is available for short or long term lease. Fitted with a Pro Tools HD2 rig, Quested monitoring, pre-amps from Universal Audio, Focusrite and Avid, and various instruments, Studio 3 is set up for music production and is usually occupied by Farr himself (although clients are more than welcome to bring their own engineer). The studio has a relaxed and comfortable vibe and is perfect for getting ideas down as quickly and easily as possible. The control room is 15’8 x 10’6, with a 14’6 x 8’6 booth. Various guitars, basses, samplers and keyboards are available at no extra cost.