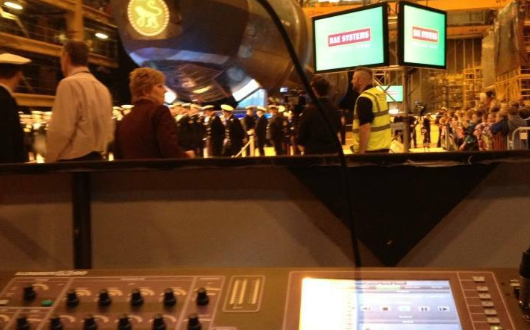 An Allen & Heath GLD-80 console mixed the launch ceremony of a new submarine by BAE Systems in Barrow, Cumbria recently.

Named Artful, the new submarine is the third to be built at BAE for the Royal Navy.

“I had feeds from VT and a local band performing at the event, plus there were six handheld radio and lectern mics for the ceremony,” said Gary Jones, managing director of ACE PA, the hire company involved.

“I had the AR2412 24-channel rack on ground level, and the AR84 eight-channel rack on the mezzanine with media for the send and return feeds. I set the four outs on the desk as Aux feeds for the TV news media, which came to film the launch and set up next to me. The BBC camera man commented on the nice clean feeds – job done.”