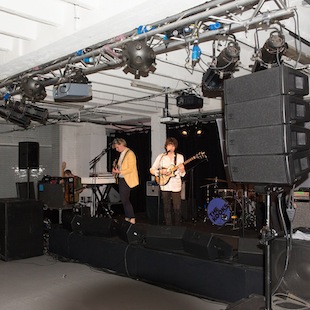 Virgin Records celebrated its 40th anniversary with a ten-day exhibition at London’s Studio B1 recently. The event was designed to showcase the talent spawned by Virgin Records over the past four decades.

Paul Timmins of Capital Sound was audio project manager, while Harm Schopman took on the role of Capital crew chief and engineer.

“The MLA Mini was amazingly effective,” said Schopman. “A PA in a reverberant room like that shouldn’t sound that good. And it also made having lavalier mics on stage workable. It sounded very natural behind the PA.”

Capital fielded the MLA Mini standard package – with four top boxes pole-mounted above an MSX for the presentation segments, and a Martin Audio a WS218X conventional concert sub positioned behind each mast. For floor monitoring purposes, Capital provided a quantity of Martin Audio LE12J enclosures.

“You can do everything in a smaller room with this system as you can in the larger spaces,” said Timmins. “The amount of power produced from four boxes on a pole fixed to a sub was breathtaking – and yet it’s so light it can be handled by one guy.

“The system is ideal for small showcases, and record label events. A lot of small gigs are tightly budgeted and to be able to package a system like this that fits into a van – rather than needing to go to the additional expense of a truck – is fantastic. Each box only weighs 13 kilos each so with two stacks of four you are only looking at a total weight of around 100kg.”