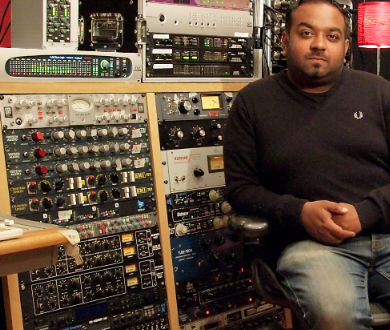 Dodangoda has used SSL gear for many years and does much of his work from his own recording facility, Long Wave Studio in Cardiff, Wales. So far he’s carried out projects for the likes of Funeral for a Friend, Motorhead, Kids in Glass Houses, Twin Atlantic and Bullet for my Valentine. A firm believer in the benefits of hybrid studio workflow, Dodangoda has combined his Nuendo system with a particularly choice array of outboard equipment, microphones and amplifiers.

“We work really hard to get everything recorded right, and as we usually multi-mic several speaker cabinets for each guitar or bass we track so we have to be sure that everything is in phase," Dodangoda said. "Knowing that we’ve taken so much care to get the sounds right at source it just seems stupid not to run it through a mix bus that doesn’t match this level of quality and attention.

"There is a nice sweet spot on the Sigma mix bus, just like when you’re mixing on an SSL console. You can drive it hard and get some incredibly musical results, but you can also run it at a more comfortable level and still hear the benefits of using the Sigma on your mix. The first time I plugged it in, I noticed straight away the depth it added to the mix. I could hear a much deeper sound, especially in the low end, and you could hear the different spaces for each instrument much more clearly, particularly the kick and the bass guitar. We’ve just finished an album and using Sigma definitely made a positive difference to how it’s turned out.”

The producer also utilises SSL Alpha Link converters as his DAW I/O, so how is he integrating Sigma into his mixing workflow?

“I am using it pretty much as a straight summing unit. I generally submix down to 12 stereo groups and then put these through Sigma," he continued. "We’re hitting the inputs at a pretty decent level, but pulling the Mix bus back slightly so we’re not too hot going back into Nuendo. Andy Jackson at SSL was really helpful, and showed us a really nice way to work with Sigma so we were monitoring the processed stereo DAW mix through the monitor section. This way we hear what would be sent to the client.

"There are so many features and ways you can use this thing but even using it just as a straight summing device gives you so much benefit on the sound of the mix, let alone all the other features. I’m not using the monitor side really as I am monitoring everything through Nuendo. However, I did use it and that all works really well and is very simple to use. The GUI software that runs it is very easy to use too, I was up and running in just a few moments.”