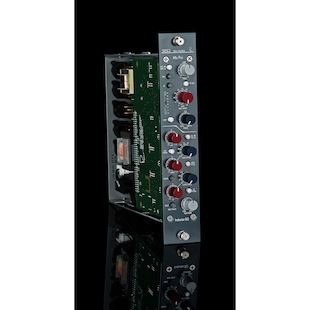 The 5052 preamplifier has 72dB of discrete, class-A gain coupled with square-core transformers. Unlike the classics, however, the output transformer features the Silk Red/Blue and Texture controls from the Portico II Series to hone the harmonic content and tonality of the output stage. By engaging these controls and sufficiently driving the output, the 5052 can produce up to four-five percent THD (primarily second order, some third order), bringing a richness and thickness to tracks when desired with no danger of overloading the output stage. With Silk disengaged, the output is modern and pristine, yet still retains Rupert’s signature large transformer sound. The mic pre section also includes a sweepable 20-250Hz high-pass filter, Mic/Line selection, 48V phantom power, and polarity reverse.

Following the preamplifier, the 5052 has a transformer-coupled output, which allows the 5052 to feed a tape machine or DAW directly from the mic pre while still using the EQ and Silk/Texture in a dedicated analogue mix path such as that found with a 5088, 5060 or vintage console. This output can also be used to insert a separate compressor between the mic pre and the EQ, or it can allow the 5052 to work with two separate sources. When the ‘TO EQ’ button is engaged, the mic pre signal is routed directly into the EQ such that the mic/line input signal flows through to the main output as a single channel strip.

The 5052 receives +/- 24V rails from an external DC power supply using a four-pin connection. There are currently two options available: the RND five-way brick supply and the RND 25-way 2U rack-mount supply. The back panel of the 5052 includes three XLR-F connections for Mic In, Line In, and EQ In, and two XLR-M connections for Mic Out and Main Out. The 5052 chassis is a ‘half-rack’ format, and can be mounted in RND’s new two-way and four-way vertical racks in addition to the existing nine-way racks and the 5088 penthouse.

With the announcement of the Shelford Series, Rupert Neve Designs has also re-released the 5051 Inductor EQ/Compressor for use outside of the 5088 console. The 5051 features the same high voltage line driver and EQ topologies as the 5052, while also incorporating a linkable VCA compressor similar to that found in the Portico II Master Buss Processor. The 5051 is available in the same vertical format as the 5052, and can share the same five-way or 25-way power supply with 5052 modules. Both the Shelford 5051 and 5052 will be shipping in November 2013.