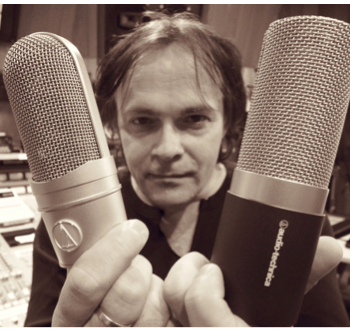 Audio-Technica mics were an important part of the recording setup for Dream Theater’s new self-titled album, which was released last month.

The band’s engineer on this album and past projects, Richard Chycki (pictured), has been a fan of Audio-Technica microphones for many years. “I regularly use several models of Audio-Technica mics for their sound quality as well as their innovative design, consistency and reliability," he said. "And I’ve used them for years, starting with a pair of AT4050 or AT4060 for the ambient portion of recordings.

"Regardless of the mic design, there was always a distinct open quality to all the Audio-Technica mics I’ve used, and they’ve performed very well in all applications. For the new Dream Theater album, by pairing the right mic with the source, we captured some pretty amazing audio with a minimum of outboard trickery. For instance, the AT5040 studio vocal microphone, with its amazing sensitivity and ultra-low noise floor, was an absolute joy to use, on acoustic guitar in particular. We also used the AT4080 ribbon microphones as part of the main guitar tone.”

The complete A-T mic list for the project included AT5040 on all acoustic guitars and some vocal tracking; AT4080 phantom-powered bidrectional ribbon microphones for electric guitars, rear ambience for drums and the strings room (in a Blumlein pair); AT4081 microphones as spot mics for cellos and a string session; and an AT4047/SV cardioid condenser microphone as a spot mic for contrabass and a string session, as well as for “B-cabinet” electric guitars.

Chycki is particularly fond of Audio-Technica’s AT4080 and AT4081 ribbon microphones. He added: “We used an AT4080 for the rear drum kit ambience, placed very low behind [drummer Mike] Mangini. The AT4080 captures a lot of the low end push from the kit without a lot of excessive top end. Another AT4080 was used as a predominant part of John Petrucci’s guitar tone. The AT4080 can take a lot of SPL, so it was placed close to the speaker cone and adjusted to find the driver’s sweet spot. For the string sessions, I used a Blumlein pair of AT4080s about three metres above the players, as well as AT4081s as spot mics for the cellos.

"John Petrucci had a very specific image of his guitar sound in his mind, describing its multi-layered depth as ‘chocolate cake’. The AT4080 and AT4047/SV were very helpful in achieving our goal, and both John and I were very happy with the results.”