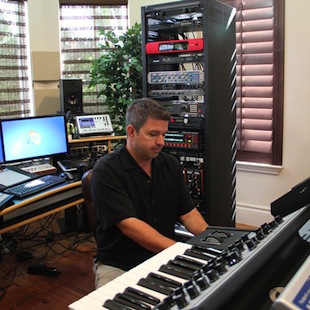 Keyboardist Ken Christian’s home studio set-up features a number of vintage keyboards and synths including a Moog MemoryMoog and Roland Juno-60 along with more modern offerings such as a Dave Smith Tempest, Korg R-3 and Kronos, and Yamaha Motif. Until recently the space was littered with wires and patchbays for routing his instruments into his Abelton Live and Cubase set-up.

“I have about forty classic synthesizers, going back to the 1970s – and this was the only way I had to route them,” he says, referring to the tangle of patch cords that he used to need to organise and record them, as well as connect them to his hardware outboard processors, another staple of classic pro audio that he likes to use. “It used to be very complicated, and I’d spend as much time routing as creating. Then I got RedNet, and it’s dramatically changed my studio and the way I work. I love it.”

Heading towards his fourth RedNet 3 unit Christian now uses the 32-input devices to connect all of his hardware. He also uses a combination of converters that he had prior to his RedNet system. The Focusrite AD/DA conversion he’s currently using to get optical into and out of the RedNet 3 are the Liquid Saffire 56, the Octopre MkII and the Octopre MkII Dynamic. All RedNet 3 units feed into a RedNet PCIe card with 128 inputs and outputs via a gigabit Ethernet switch.

One of Ken’s RedNet 3’s alongside his other outboard gear.

“I’m going through a number of outboard devices, including my synths and the outboard processing,” he explains. “The RedNet 3 units route audio in and out, anywhere I need it, and I don’t have to think about it.”

“I can have a live-recording or work area anywhere in the house I have an Ethernet connection, so it’s really allowed me to expand the boundaries of my studio. I’m ready to buy my fourth RedNet 3, and that will increase my I/O capability to 128."