Home / Live / DiGiCo on the road with Bruno Mars 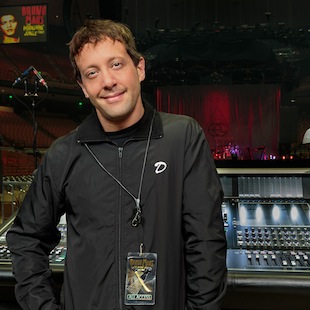 DiGiCo on the road with Bruno Mars

Clair Global outfitted the tour with two DiGiCo SD7’s, one at FOH and one for monitors, both running redundant Waves SoundGrid servers. Each desk has two SD racks for individual control of preamps and are connected completely via digital Optocore fibre cable.

FOH engineer Derek Brener sends MADI lines directly to the record rig, handled by Charles Moniz, who records 96 channels to a Pro Tools rig without the need for an expensive audio router for archival purposes.

Brener’s managing a total of 108 physical inputs for the eight-piece band consisting of two drum kits, bass, guitars, multiple keyboards, a B3 organ, plenty of vocals, horns, playback, and a couple of talkback mics. He’s been a DiGiCo fan since Mars’ first run in 2011, and stepped up into an SD7 (from an SD8) because of the larger input requirements.   “We have 108 physical inputs and I still have plenty of capacity for eccentric bussing, effects, and outboard apparatus,” he explains. “I also take advantage of the macros, too. I love to have hot keys to turn sends on and off to delays. For example, the delays in ‘Just the Way You Are’ are live so the hot keys make it very easy for me play the desk like an instrument and delay just certain words instead of either having it on or off.

“I love DiGiCo consoles for their smooth sonics and ultra-customisable surface. The SD7 is a monster and gives me a lot of freedom and space to experiment and tweak. It has a staggering amount of features and power. Do you need to use all of the features? HELL NO! But is it nice to have them right there if you need them? Absolutely! The snapshot recall scope is great, dual engines, dynamic EQs, etc."

James Berry is also no stranger to DiGiCo desks, having used an SD7 on recent outings with Beyonce on monitors before signing on with Mars. The band recently transitioned to all in-ears, utilizing J&H in-ears, Sennheiser 2050 IEMs and Sennheiser 3732 wireless systems.

“The new features in this latest software version are very helpful,” he says. “I love the way the new control group feature helps control auxes. It’s great to be able to splay out all my auxes at one time on one channel. I’ve been using the Copy Audio feature extensively to route audio anywhere, which gives us a lot of multitasking opportunities and lets me connect a lot of gear with better quality. We also have a total of four SD Racks between FOH and monitor world, as well as two Mini SD Racks loaded with all AES cards taking in all the wireless. This allows us to keep everything digital.”

Berry is also making use of everything onboard the SD7 for his effects, with the exception of a few Waves plug-ins for Bruno’s output and vocals. “I’m using a TC Electronics 2290 for Bruno’s delay, and running three TC M6000 taking that AES to my vocal rack on the SD7 and its all clocked in at 96k off the console. I’m also using MIDI to control those from the snapshots. In addition, I’m using the Waves C6 plug-in on both his vocal and outputs.”