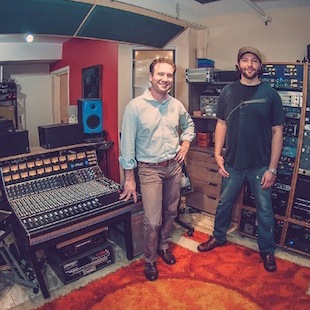 Brooklyn-based The Ice Plant studio picks up an API 1608

The new studio, based in the Williamsburg neighbourhood is run by multi-instrumentalists Wayne Silver and Adam Zirkin and features a multitude of analogue gear including the new API board as centrepiece.

“My passion for great gear started a long time ago,” said Zirkin. “I purchased some of The Ice Plant’s equipment well over ten years ago, and for as long as I’ve been collecting gear, Wayne and I have been talking about what a modern studio should be and what it should offer. Ultimately, we want the room itself to serve as a creative tool. We want not only to get great recordings, but we want to inspire better performances and better songs.”

In stark contrast to the live room/control room paradigm, The Ice Plant gets its creative vibe by placing almost everyone – including the producer/engineer – in a single room. “It’s a warm, comfortable atmosphere,” said Silver. “There are different stations, such as guitar, keyboard, and bass, as well as an isolation room for the drums. Everything is out in the open and ready to play. A musician could walk in here empty-handed and be ready to go. We’ve got everything.” And yet the duo deftly organized the room so that it doesn’t feel crowded. “The idea,” explained Zirkin, “is to create an environment that is conducive to creativity and communication. Whatever we may lose in terms of isolation, we more than make up for in vibe and collaboration.”

The 16-channel API 1608 shares the space with the musicians and is loaded up with twelve API 550A EQs, four API 560 EQs, a vintage API 525b compressor, and a handful of other processors that fit the API 500-series protocol. “The API 1608 is a small-format board with large studio quality, and that was very attractive to us,” said Silver. “It has an earthy vibe – that true warm analog sound. I basically harvest all of the music that’s happening in the room through the 1608, and everything sounds better through it. With the sonic part of the process taken care of, I can focus on helping the musicians stay in their zone.”

The Ice Plant’s API 1608 is flanked by one of the most eclectic collections of gear in the industry. The outboard racks and microphone cabinets include many studio staples alongside products from some of the industry’s best up-and-coming “boutique” manufacturers. Zirkin is an avid guitar and keyboard collector, and he and Silver have made their entire collection of nearly fifty instruments available to clients. With seemingly everything from sixty-year-old Guilds and Gibson, to modern-day Suhrs and McInturffs, Zirkin and Silver hope The Ice Plant’s instruments will inspire ideas and performances that were elusive in their client’s rehearsal spaces and writing rooms.