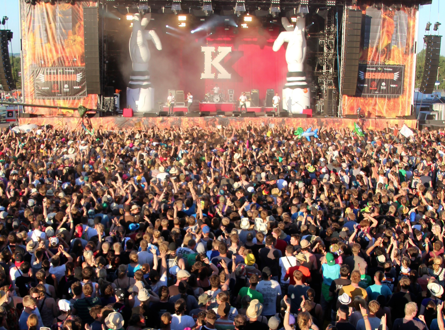 Founded in 2005, when it had a capacity of just 2,000, Deichbrand has grown to become one of Germany’s leading rock festivals. The four-day event pulled in around 35,000 people each day this year, with LEO providing audio for the whole 150-metre-long audience area.

Consisting of 48 LEO-M line array loudspeakers, the main stage system was augmented by eight MICA speakers spread across the stage lip. A total of 30 1100-LFC control elements were brought in to handle the low frequencies, while system drive and alignment was supplied by a Galileo Callisto loudspeaker management system, comprising two Galileo 616 AES and six Galileo Callisto array processors.

The system for the smaller Waterstage included 42 MILO loudspeakers and 32 700-HP subs, while the Palastzelt stage featured 24 MICA loudspeakers per side, along with 18 M’elodie line array loudspeakers. Low end was taken care of by 18 600-HP subwoofers and six 1100-LFC loudspeakers.

POOLgroup’s two Meyer Sound LEO systems were in use several other times this summer in Germany, Austria, and Scandinavia, and were deployed for tours by the likes of Peter Maffay and David Garrett.

The video below shows Deichbrand production manager Felix Suwelak explaining why this particularly audio set-up was chosen for the 2013 event.